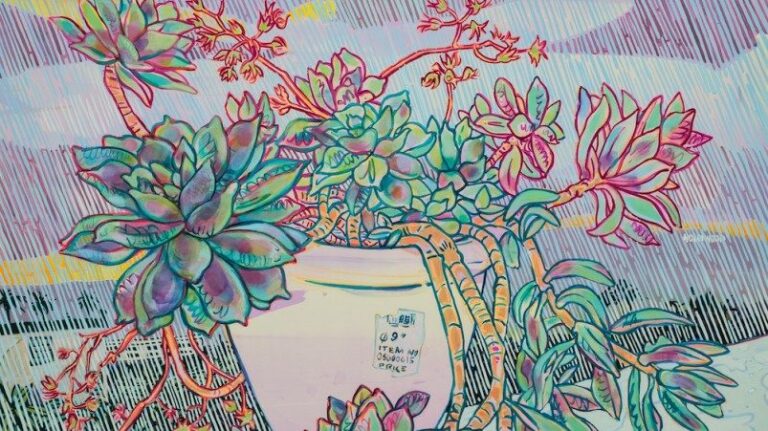 The American artist Hope Gangloff (born in 1974) made several landscape paintings this year, some of which are reminiscent of Vincent van Gogh's work. Her lively use of color and her tangled brushwork are probably the main reasons for this.

Let's start with a comparison between the expressive style of painting and the artist's personality--there is clearly a similarity. In an interview for Vogue in 2017, she says: "I take pleasure in seeing what colors do to each other." Painting is all about having fun. Despite her resemblance to Van Gogh's work, her character is far removed from the traumatized personality of the 19th-century Dutch painter. Gangloff listens to music and dances in her studio when she paints. Occasionally she even jumps on a trampoline.

For the landscape paintings, she traveled from her New York studio to California and New Hampshire.

The resemblance between Gangloff's Icicle Weeds on Monterey Bay and Van Gogh's Irises is striking: strong lines, repetitive marks, and bright patterns. The wind blows through the flora of the shores of Monterey, California. The sun is almost setting, and in the distance, you can see a bit of turbulent sea. Van Gogh's typical use of color is visible in the plants; the combination of green and red was seldom seen before Van Gogh's time and is associated with his weak mental state.

The noticeable, perhaps unconscious, influence of the impressionist master may be present, but Gangloff is able to keep her own style. Works such as From MacDowell with Lurve and Summer Night in the East Village, with their contemporary touches, reflect her individual style. While Icicle Weeds is undetermined in time, the artist shows her own environment in these two works. The plants of the landscapes are carefully transplanted into pots and decorate the desk, which looks a bit disorderly. A gum, a few pens, a jar of glue--against the bench, we see another painting by Gangloff, although in a completely different style.

On Summer Night in the East Village, she sharpened the contrast between nature and human actions. On the one hand, people take nature away from its surroundings by enclosing it in pots, but on the other hand, people cannot do without nature in an urban environment. Just think of the growing interest in planting more greenery in urban areas; trees and plants not only bring tranquility but also provide more coolness in the city.

Gangloff claims to be restless. As an artist, she is always looking around and processing all the information she captures. She says: "The only thing I can control is my studio." Maybe that's why she gives her potted plants a leading role. The allusion to Van Gogh's Sunflowers is there, however, in an entirely different environment, which provides the work with additional strength. She might have wanted to give the work a contemporary ecological touch.

She places her plants in an artificial light that contrasts with the surrounding black buildings. The contrast makes the colors vibrate more, another characteristic of Van Gogh.

Before this series of landscapes, Hope Gangloff mainly painted portraits. At a young age, she was already portraying her friends and family. She places her subjects in a personal atmosphere and lets them do something: reading, typing, playing chess, etc. In this way, each portrait represents a unique image.

Hope Gangloff's exhibition at the Susan Inglett Gallery in New York runs until the 30th of November 2019.