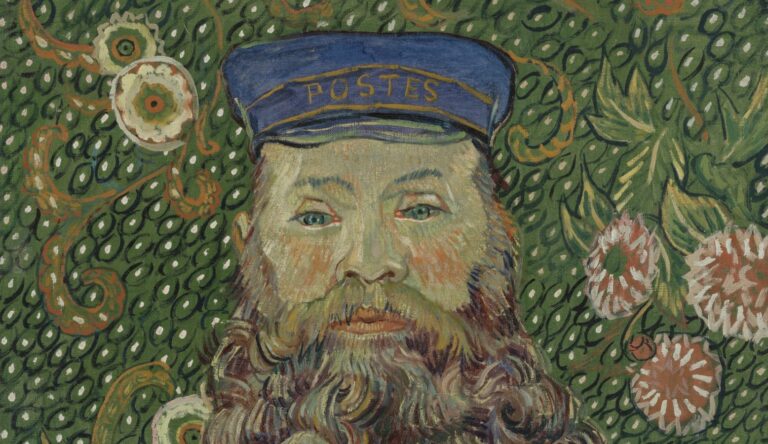 Joseph Roulin worked for a post office in the French town of Arles. He didn’t carry letters—he rather was sorting mail at the train station. In 1888, Vincent van Gogh moved to Arles, a fifteen-hour train ride from Paris, in the hopes of creating an artist cooperative.

The plan never came to realization, and the artist found himself lonely and isolated—a situation exacerbated by his inability to speak the challenging local Provençal dialect. Joseph Roulin was van Gogh’s neighbour, they lived on the same street—and became close friends. The painter created over 20 portraits of Joseph Roulin and his family. This picture, which van Gogh boasted of having completed quickly, in a single session, was painted after Roulin got a better-paying job and left Arles for Marseilles. Some scholars think that this portrait was not painted from life but rather from memory or from previous portraits.

Van Gogh was drawn to Roulin’s distinctive facial features, his devotion to his wife and children, and to the exceptional kindness he demonstrated toward the artist. When in 1888 after an argument with Gauguin, van Gogh underwent a psychotic episode in which he menaced his fellow artist and then sliced off a part of his own ear, Roulin tended to van Gogh in the aftermath of this incident. He was seeing him in the psychiatric hospital in Arles, watching over him during his internment there, writing to his family to reassure them of his health, and providing constant solace to the recovering artist. In a letter to Theo, Vincent describes his friend as:

a man who is not bitter, not melancholy, not perfect, not happy and also not always perfectly honest. But such a good fellow, so wise, so feeling and so faithful.

Between August 1888 and April 1889 van Gogh painted six consecutive portraits of Roulin, three of which had flowers in the background. The postman is portrayed in a frozen moment of time, but full of energy, all but buzzing with life. In the hands, face and even the brushstrokes of the blue uniform, the viewer senses a man conscious of being watched.

In another letter van Gogh sent to his brother Theo, he wrote that of all subjects, the modern portrait excited him the most. As he elaborated, I want to paint men and women with that something of the eternal which the halo used to symbolize, and which we try to convey by the actual radiance and vibration of our coloring. Portrait of Joseph Roulin is a great example of that idea.