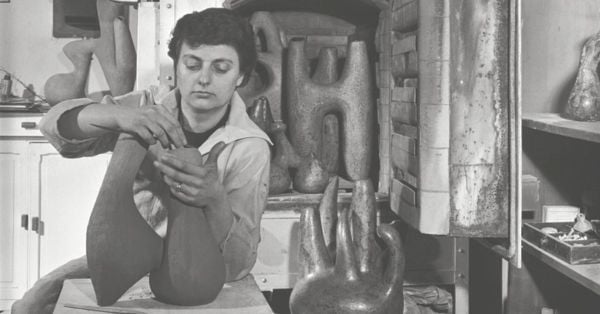 Sculptor, ceramist, artist, teacher. Valentine Schlegel was a headstrong individual with fervent, creative independence who carved out her own path in history. Despite these achievements, her work was kept in the dark until just a few years ago. Her legacy became more widely known thanks largely in part to the extensive research and dedication of artist and curator Hélène Bertin’s 2017 exhibition at CAC Arts Center in Bretigny, France. The exhibition, This Woman Could Sleep in Water, was an extensive tribute to this versatile, French modernist.

Valentine Schlegel was born in 1925 in the southeast of France in the port town of Sète. She was born into a family of artisans and her love of the handmade grew from her roots. In 1942, she studied drawing at l’Ecole Supérieure des Beaux-Arts in Montpellier.

At 20 years old, Schlegel moved to Paris where perhaps she felt she could live more openly as a lesbian. It was there, at the heart of the Parisian arts culture, where she was exposed to ceramics and a world full of eclectic creatives including French New Wave filmmaker Agnes Varda. Schlegel later worked the first arts festival in Avignon designing costumes, painting sets, working as a props specialist, and ultimately a stage manager. She worked with the festival until 1951.

By 1956, she became a teacher and taught at the Musée de Arts Decoratifs in Paris from 1958 to 1987. Schlegel taught using invented teaching methods perhaps more intuitively than most. Over the course of her teaching career at the school, she also founded the clay modeling department for workshops for young people under 15.

Her works were also exhibited a number of times at the museum where she worked despite the fact that she opposed the idea of making work for the purpose of the institution. Schlegel always stayed true to herself and her work. For years, she traveled between the south of France and Paris. The diversity of these two places definitely shaped and fueled her artistic practice.

Schlegel experimented and worked with several different types of materials throughout her artistic career including wood, clay, textiles, leather, and plaster. Schlegel was a skilled craftsperson who hand carved utensils and bowls from mahogany wood and made leather bags and sandals. She often collaborated with friends who made work of the same vein. Schlegel created her work with the intention that it had a function, not just a lifeless object. She designed and made costumes during her time working with the Avignon Arts Festivals.

Schlegel also made numerous ceramic vases and vessels. Her experimentation with clay and her openness to discovery led to the creation of her gestural, biomorphic ceramics. These forms seem to be instinctively inspired by nature and the Mediterranean landscape of her childhood. They take on a life of their own as both functional and sculptural objects.

Beginning in 1960, she turned her focus to architectural design and began creating plaster fireplaces in her own home. She then branched out to modernize the homes of friends and collectors. She wanted to activate the domestic space and encourage our bodies to engage with a sculpted interior by transforming the space into an intimate experience.

Many of her fireplace designs included shelves for home decor and seating accommodations. Schlegel’s designs were extensions of natural forms: sweeping curves, wave-like, and mountainous shapes. She expanded her home designs to also include built-in bunk beds. Up until the year 2000, she produced her fireplaces working collaboratively with several assistants and artisans to realize her fantastic designs. These sculpted interiors breathed a new energy into a room and transformed an ordinary space into a “living” space.

The works of Valentine Schlegel are timeless; they capture the essence of the natural world with an imaginative, abstract twist. While her personal life remains somewhat of a mystery, there are countless images of her work available to view online. Your eyes can feel the sensuous curves of her ceramics and sculpted fireplaces. Schlegel’s remarkable artistic contribution to architecture, sculpture, and ceramics is not to be forgotten. Schlegel lives in Paris and her multifaceted body of work continues to inspire artists of today and tomorrow.