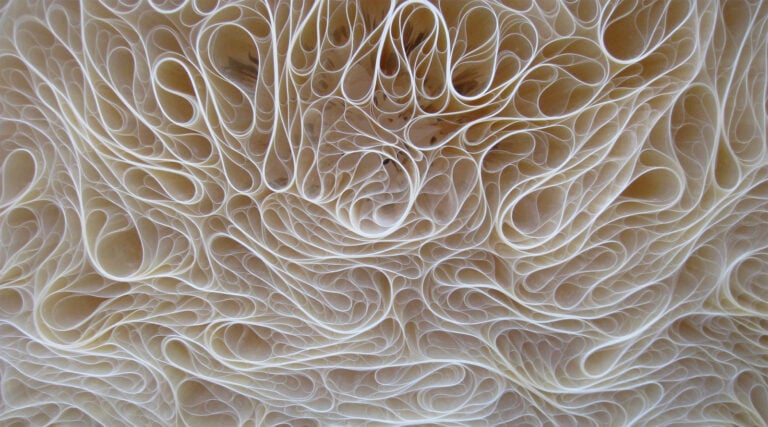 Styrofoam cups, pencils, rubber bands and straws are not the kinds of materials usually associated with art installations, yet these mundane, everyday items are used in abundance in Tara Donovan's works. She uses them to create massive abstract structural pieces of art.

Donovan was born in 1969 in Queens, New York and studied at the School of the Visual Arts and Virginia Commonwealth University. She was awarded the first Calder Prize in 2005. She initially began using commonplace materials because they were cheap and readily available to her as an art student. [caption id="attachment_18052" align="aligncenter" width="683"] 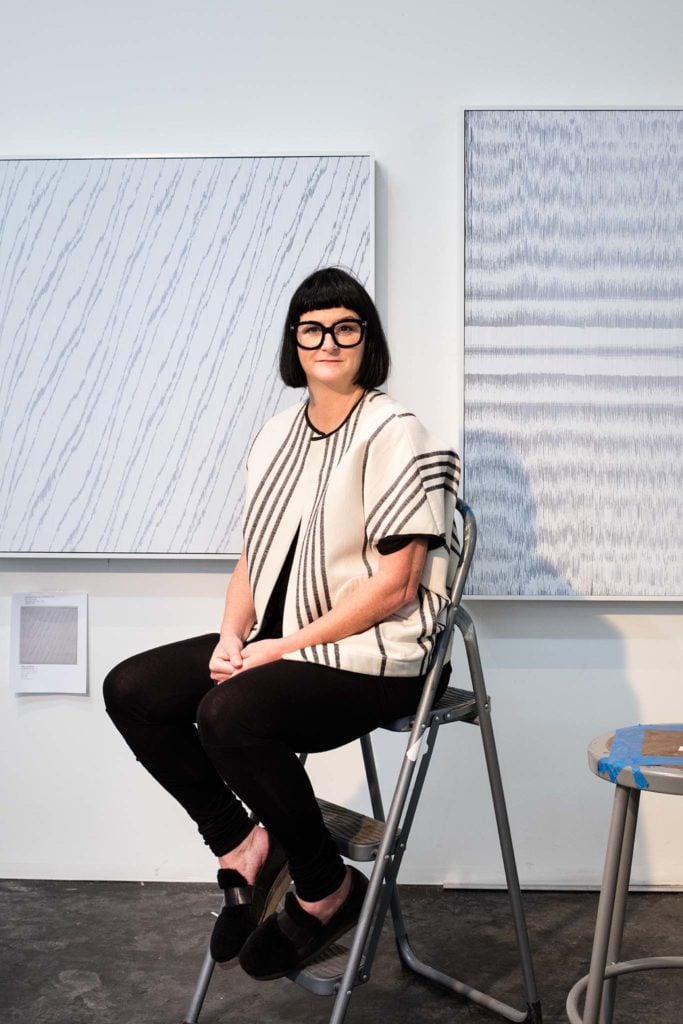 Tara Donovan, 2017. Source: Woman Wears Daily[/caption] Her work has been described as whimsical, expansive, sublime and other-worldly. Quite the opposite words you would expect of the low-profile materials she fashions her art from. Items like tape, toothpicks and straws are accessible and inexpensive, yet the sheer volume of the items and size of the sculptures creates in Donovan's words " a gestalt of sorts". So methodical and detailed, she works at times like a scientist or architect, but at the same time creates in such a spontaneous and organic way, letting the materials guide her creation. The pieces in her installations are "site-responsive" - reacting to the lighting, air and movement of viewers. Most of her art is untitled, a deliberate choice to allow the viewer to bring their own associations and feelings to experiencing the work. "Untitled" from 2004-2008 made from thousands of styrofoam cups held together with hot glue is a beautiful example of her work. The repetition, diffusing of the light, the awe-inspiring size and lightness transcend the simple cup into a poetic whole. [caption id="attachment_18047" align="aligncenter" width="1000"] 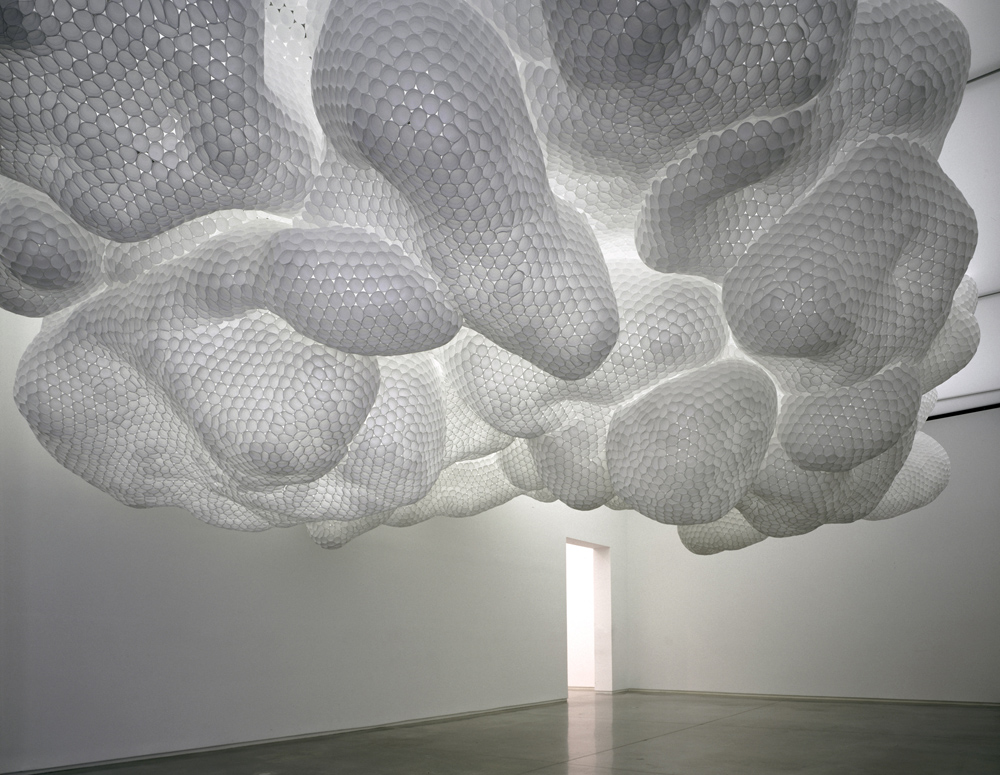 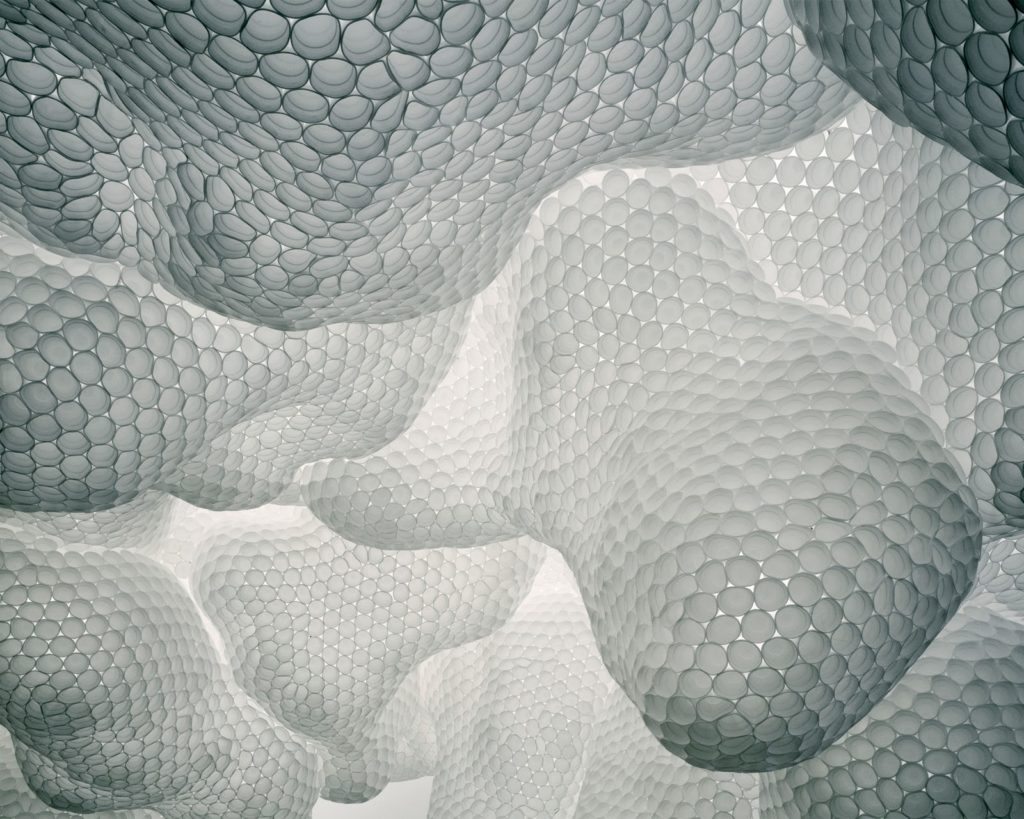 Tara Donovan, Untitled, 2004, styrofoam cups and hot glue. Source: Denada Design[/caption] Another "Untitled" work, this one from 2008, is sheets of polyester film woven together into a labyrinth, almost molecular formation. Using a singular material in repetition of the patterns and forms creates an organic and unpredictable feel.  She uses the properties of the materials to guide the formations. The positioning of the viewer alters the light and angles, providing a different experience for everyone. [caption id="attachment_18016" align="aligncenter" width="1000"] 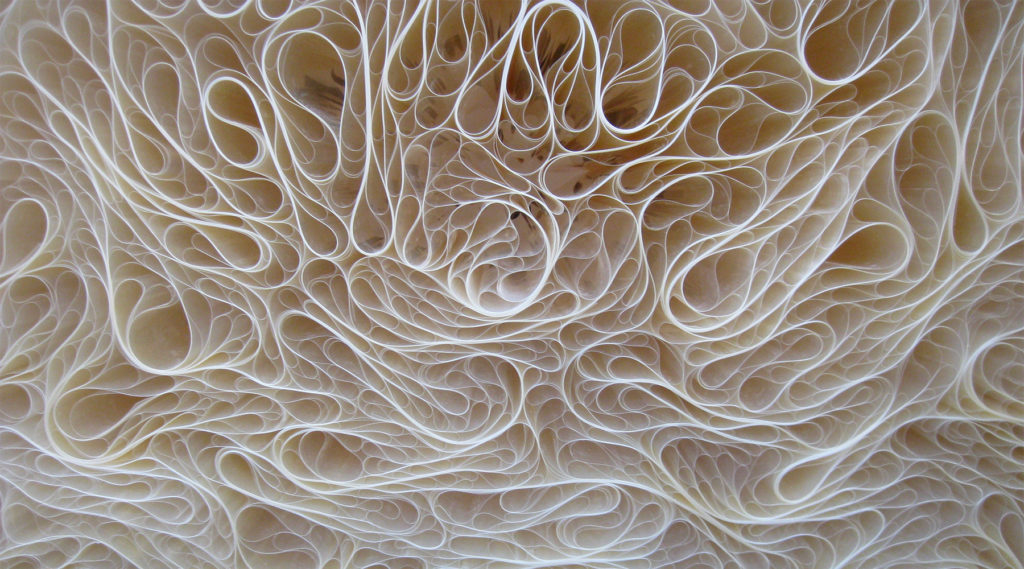 Tara Donovan, Untitled, 2008, polyester film, Source: Art & Translation[/caption] Tara makes it clear that she does not try to mimic nature, rather her work "mimics the way of nature" - the unfolding, building form upon form. [caption id="attachment_18035" align="aligncenter" width="1000"] 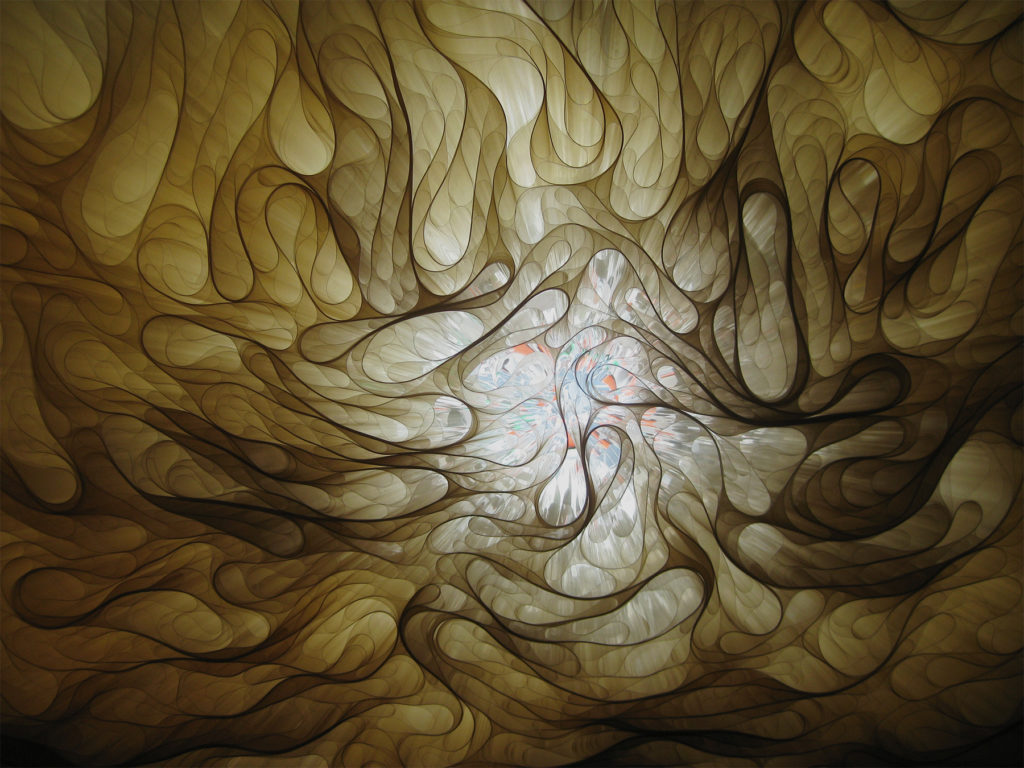 Tara Donovan, Untitled, 2008, polyester film, altered light. Source: Art and Translation[/caption] Thousands of index cards piled into mountainous stalagmite formations were used for the 2014 "Untitled" installation. The towering structures are very geological in appearance - another theme Donovan's work plays with. She was keen on using the edges of the cards to create the feeling of ascension and building. She says, “I think of my process almost as a re-manufacturing of a manufactured material, and I think that it’s inevitable that what results goes back to nature. I never have a set idea in mind of what an overall composition will look like; it really grows out of a doing and making and a sense of play and an idea of chance." [caption id="attachment_18050" align="aligncenter" width="768"] 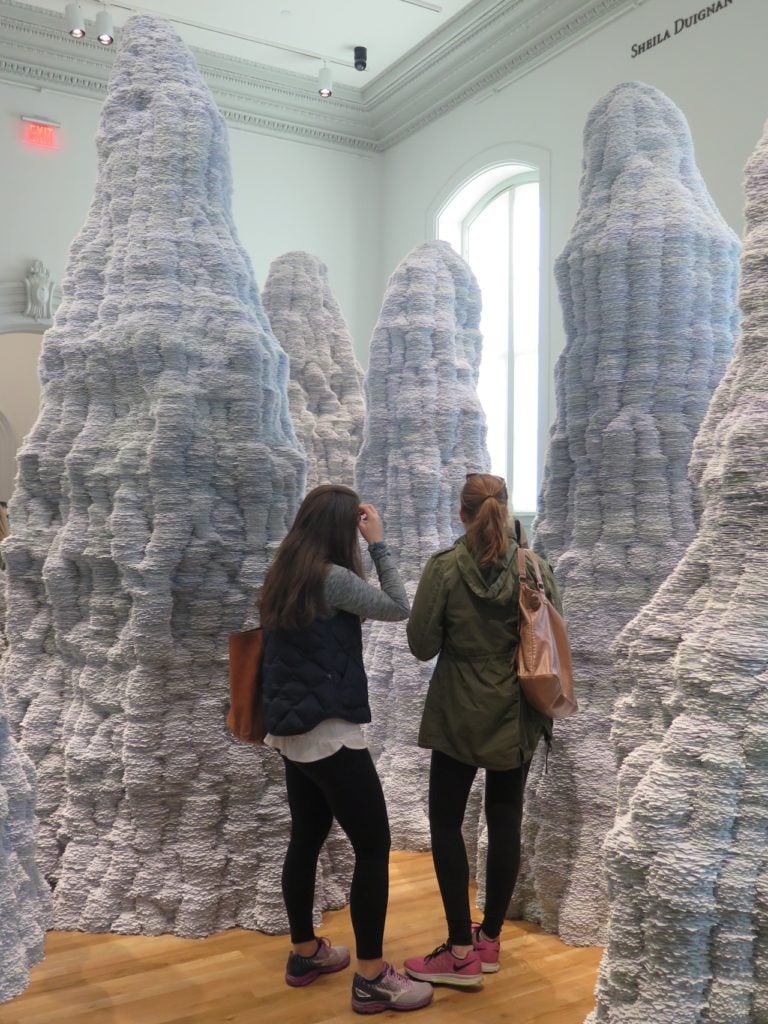 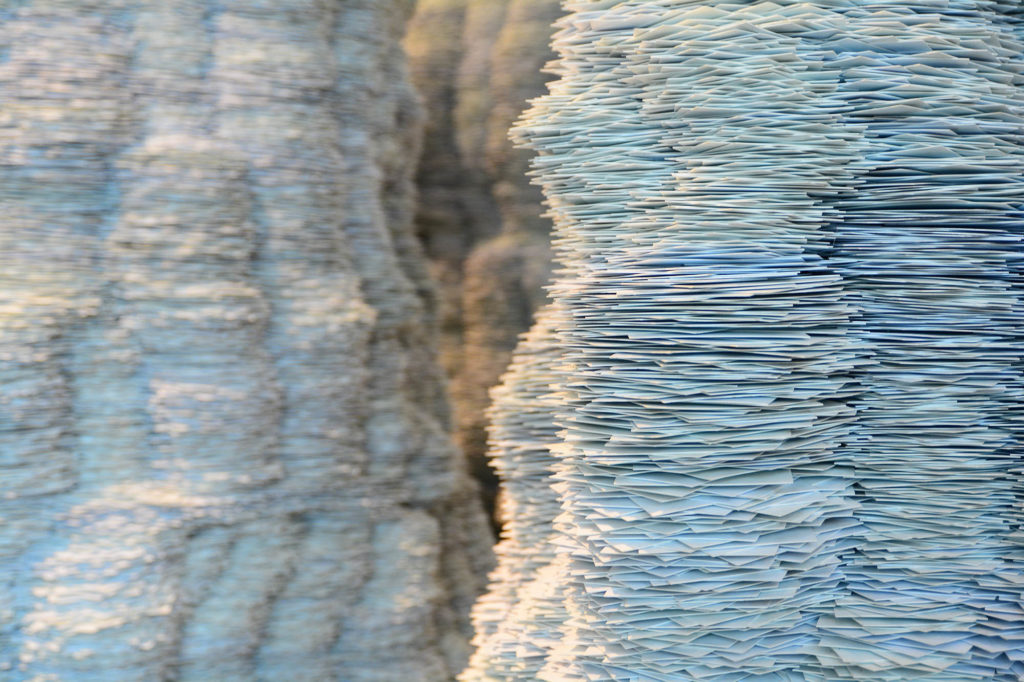 Tara Donovan, Untitled, 2014, index cards, detail. Source: Unsafe Art[/caption] A true exercise in finding beauty in commonplace objects, Tara Donovan continues to explore and play with these commonplace items.  Her current exhibition, "Fieldwork", is at the Museum of Contemporary Art in Denver, Colorado. This exhibit is the first time that both her free-standing and wall-mounted sculptures will be shown together. It provides a full view at the workings of her craft: “At a certain point, my hand disappears, and it’s as though the pieces could generate new forms on their own infinitely.”