Tomás Saraceno at The Shed and Tanya Bonakdar Gallery 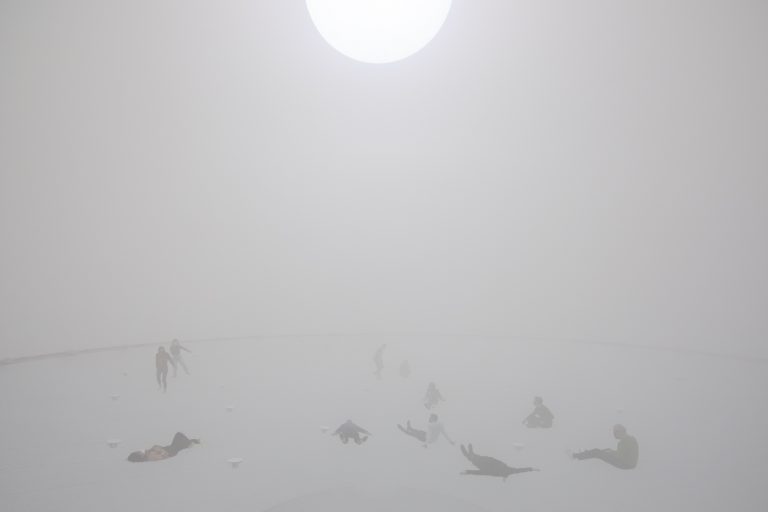 Tomás Saraceno is an Argentina-born, Berlin-based artist and community activist who has filled two New York City spaces with the wonders of spider webs for the solo exhibitions Tomás Saraceno: Particular Matter(s) at The Shed and Tomás Saraceno: Silent Autumn at Tanya Bonakdar Gallery. Cultivating a specialized practice around the interconnections between human and nonhuman lifeforms and in collaboration with multiple species of spiders and their intricate web formations, Saraceno brings awareness to global inequities not just among human populations but across all life forms.

Free the Air: How to hear the universe in a spider/web

Tomás Saraceno: Particular Matter(s) at The Shed is centered around a larger-than-life multi-sensory installation consisting of two webs, each ninety-five feet in diameter. One is suspended forty feet in the air and overlooks a lower web twelve feet above the ground. The experience of this spider universe includes a ten-minute concert in four movements based on the sights, sounds, and vibrations of a spider and its web. Participants step into a cavernous, white space that is foggy and dimly lit. One walks across the giant and slightly terrifying nets either peering up at those above or looking down at others clumsily finding a place to lay down and settle in for the concert. The number of bodies permitted at one time on each level is carefully controlled to ensure the safety of visitors while also allowing for plenty of room to spread out.

When the concert begins, the foggy space becomes pitch black. Vibrations from shaker devices strategically installed across the webs are felt underneath. Meanwhile sound waves wash over and ease one from the shock of complete darkness into a hazy and relaxed state of being. Mixed feelings of solitude and communal awareness run through this experience intended to place humans within the realm of a spider. The sound waves are recordings of spiders at work constructing and moving across their webs. Understanding the web as an extension of the spider’s sensory and cognitive systems, the artist is proposing the web as a living material assemblage, as opposed to understanding it as a separate, non-living form.

Saraceno’s devotion to the world of spiders, Arachnophilia, has led to collaborations with different species of spiders invited to create hybrid webs that have been archived by the artist and placed on view in the galleries of The Shed. In consultation with esteemed arachnologists and scientific institutions, Saraceno devised a method for making three-dimensional scans of his hybrid webs. Through the use of this advanced technology, one can better appreciate and analyze the complicated architectural forms created by various species of spiders. By mapping the tiny universes of spiders and through the merger of solitary web making activities among multiple spider species to create communal and hybrid webs is an extension of Saraceno’s approach to building new communities and encouraging environmental and socially-driven collaborations across all living beings.

Another gallery at The Shed is filled with an inflated installation of recycled plastic bags repurposed into a giant balloon, an Aerocene sculpture. Visitors enter a colorful space and are surrounded by the logos of international brands emblazoned across plastic bags. This patchwork of plastic bags sourced from around the globe but familiar to all underscores the ubiquitous and pernicious use of these indestructible bags. Saraceno embarked on collaborations with interdisciplinary artistic communities to create similar airborne structures from recycled plastic bags in 2007 when he started the Museo Aero Solar, a flying museum. The central mission of this practice is to find communal pathways towards ethical collaborations with the environment and the atmosphere, free from carbon emissions. Generally intended to be launched outdoors, the artist’s website provides interested participants with instructions for constructing their own Aerocene sculptures in the spirit of “do-it-together.” Contained within The Shed, the Aerocene installation is a reminder of the inequities across the world at large, some nations more guilty than others for the harmful and unsustainable practices that have led to the negative impacts of climate change that affect many, especially the most vulnerable populations.

The Shed as the sight for this major Saraceno exhibition is a curious choice of location given the artist’s commitment to underserved communities, a practice that seems to contradict this space as a recent addition to the cultural landscape of Manhattan but more notably as part of Hudson Yards. With the exception of The Shed, Hudson Yards is an area of shiny retail spaces, a profusion of high-rise buildings, and the eyesore otherwise known as the Vessel. Hudson Yards is a prime example of the Capitalocene, that which is understood as a system of power, profit and re/production in the web of life. Saraceno’s work is in direct response to the Capitalocene and the notion that ecological crises facing us today were caused not by humans in an undifferentiated and generalized way but precisely through the global spread of capitalism and socio-economic-ecological injustices.

Arachnophilia and Aerocene are mindful projects that are difficult to fully embrace given their placement in the middle of Hudson Yards but also because of the hefty entrance fee to experience this exhibition. There are no free options for the general public and the ticket price is the highest for those who would like to experience the Free the Air installation. It would run a family of four more than one hundred dollars to access the full experience, thus making this an exclusive experience only open to those capable and willing to pay the price. An experience like Saraceno’s should be accessible to the diverse communities living in and around New York City but, unfortunately, the high entrance fee creates a barrier between the concepts being explored by the artist and the wider audience.

Further downtown, in the Chelsea neighborhood of art galleries is another Saraceno exhibition at the Tanya Bonakdar Gallery that is free to the public. The centerpiece of this exhibition is a musical spider web that takes over an entire room. Visitors are allowed to walk in and around the thick strands of this meticulous recreation of a space web, a style of web that is three-dimensional and based on an orb. The artist devised a musical response to a tug on any of the strands as a way of reproducing and magnifying the proportions and sounds of a web, interpreting it as a musical instrument in reference to the vibrations of webs and the non-verbal forms of communications of spiders. The interactive web allows visitors to be active participants, a perfect counterpart to Free the Air at The Shed where participants take on a passive role.

Tickets are available for purchase to visit Tomás Saraceno: Particular Matter(s) at The Shed through April 17 2022 and Tomás Saraceno: Silent Autumn at Tanya Bonakdar Gallery is free and open to the public through March 26 2022.