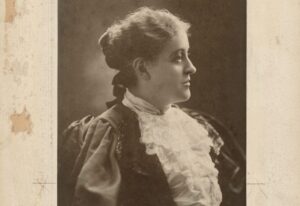 Theodore Christopher Marceau (1859-1922) was an American photographer who pioneered the creation of a national chain of photographic studios in the United States in the 1880s. He founded “Marceau Studios” in New York, Philadelphia, and Boston and he quickly became one of the most widely known photographers in the country. He also proposed an idea still in use today: copyright symbol.

Theodore Marceau‘s career as a photographer began when he was 22. At the time he was serving as the official photographer of the United States government’s astronomical expedition to South America to observe the transit of Venus. He then served on the staff of the Governor of Ohio and the Governor of California.

The photographs presented below are from the collection of the California State Library in Sacramento.

At that time, Marceau had diverse photographic studios that did portraiture, scientific photography, and occasional photojournalism. He became greatly interested in theatrical portraiture – he used a lot of props, drapes, and painted backdrops in his portraits. Marceau also specialized in official portraiture, travel images, and advertising photography. Many famous people were photographed by him. His various branches were run as local service photography shops, doing home photography, Society shots, and official function images.

In 1900, he established “Marceau Studios” in New York and installed Edgar A. Caffey as his photographer and operator. He also purchased the Sarony studio and for much of the first decade of the 20th century he ran the major New York studio “Otto Sarony” as well.

In 1905 Marceau established the “Professional Photographers Society of New York State” and served as its first Vice-President. He also organized the “Copyright League” that lobbied the United States Congress for stronger rights protections for photographers against the appropriation of their images by newspapers. It was Marceau who recommended that a “c” with a circle around it and the photographer’s name on the front of an image serve as the public claim that an image was copyright protected.

Marceau became a very well connected and rich man. He was into real estate and collecting. Therefore he owned substantial chunks of Manhattan real estate, a fleet of automobiles. Furthermore, he was the financial sponsor of the Rotary Motor Company. He was listed in the New York “Blue Book” and was worth millions at the time of his death. And of course, he was a member of the Masonic Fraternity.

He died due to heart failure at his home in Premium Point, New Rochelle on June 22, 1922. He was survived by one son, Theodore Marceau, Jr. who briefly took over operation of the studio before selling the brand.