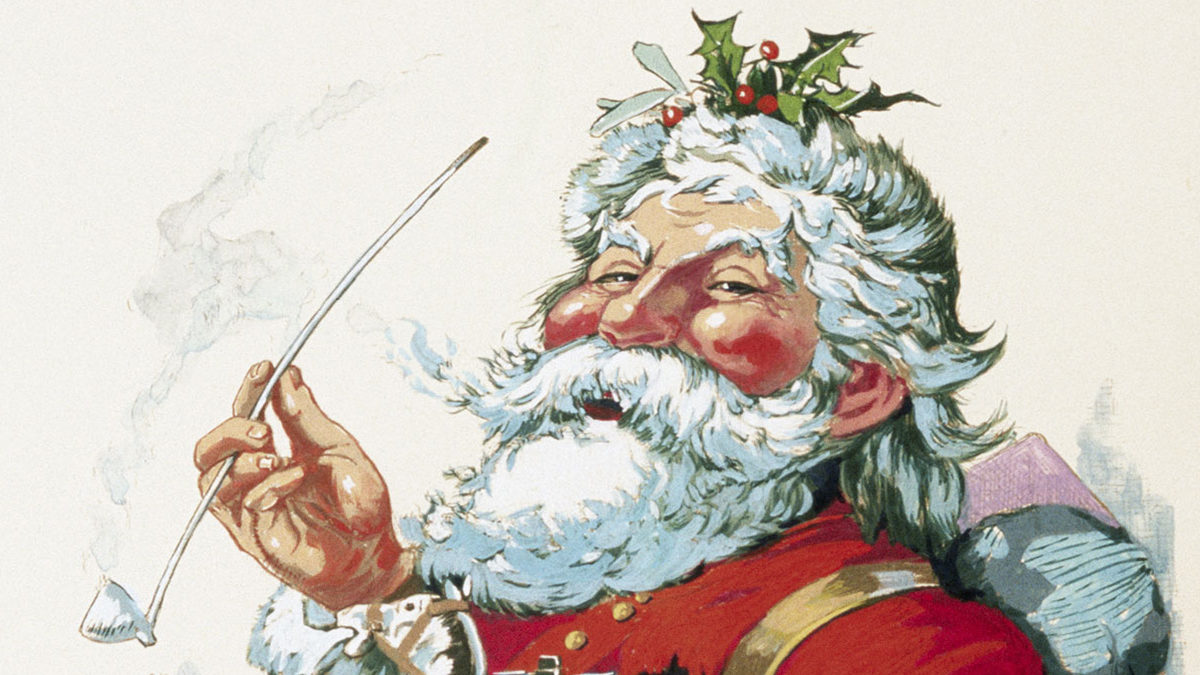 “Twas the night before Christmas,
when all through the house
Not a creature was stirring, not even a mouse…”

Santa Claus, St. Nicholas, Old St. Nick, Father Christmas, Kris Kringle, Papa Noel, Weihnachtsmann. Whatever your culture, he is a man of many names. But what else do we know about him? Where does the modern (if not Americanized) version come from? I’ll give you a hint. The above portion of the poem Twas the Night Before Christmas by Clement Moore, is part of the answer. But then again…so is Thomas Nast.

Who we know as Santa Claus is a fairly new idea given the large span of history. Pieces of folklore combined with European traditions of St. Nicholas make up what we know and relate to the jolly old man in a red suit. But Thomas Nast, a cartoonist with Harper’s Weekly in the mid-to-late 19th century, helped in this process.

Taking the words of Moore’s poem, Nast forged together a new identity for old St. Nick. He brought together the tales of the man who brings presents to children in European folklore and the Saint from the 3rd century CE, forging them into a jolly man who wears red, rides in a sleigh pulled by reindeer, and brings presents to ‘good’ boys and girls all over the world. The artist also used his own likeness when drawing Santa, leaving us with his imprint on our culture throughout the rest of time.

Nast’s cartoons were more than slightly politically aligned. If we look at his rendering of Santa, the union soldiers surround him, as he wears stars and stripes which mirror the flag behind him. There is also a marionette in the likeness of a certain Confederate leader.

The statement his January 1863 cartoon(s) made was big. He is suggesting that Santa is from the Union, and making it a Union holiday. But Nast was just one piece in the machine that brought a religious holiday to the commercialized gift based event it is today. Prior to this, the industrial Revolution helped to create a middle class who had money to spend on the holiday.

Nast built on this during the Civil War – a time when people needed to be reminded of the simple gestures to bring happiness to their lives.

His other works contain hidden agendas as well – so even though we may not see a push for the raise in military wages, Nast’s Merry Old Santa Claus, along with his other cartoons, both solidified the modern imagery of Santa and pushed war time agenda(s).

The German-born American cartoonist grew up in the neighborhoods of New York City and showed an early inclination to drawing cartoons. By his late teens, he had already secured steady work in prominent agencies, culminating with his 20+ years at Harper’s Weekly.

Nast’s cartoons are an important part of American history. Because even if people couldn’t necessarily read the newspaper, they could understand what was happening via the illustrations.

If you find any joy and inspiration in our stories, PLEASE SUPPORT
DailyArt Magazine with modest donation. We love art history and we want to keep going with writing about it.
$5 $10 $25 $50 $100 MONTHLY
Related Topics:featured, thomas nast

Art historian (art lover, artist), general nomad, writer, Mom to 2 girls, and wife to a pilot. When she’s not spending all of her free time reading and writing YA novels, she can be found at her favorite coffee shop drinking coffee in all its various forms…right now, that’s an iced vanilla latte half sweet with oat milk…in case you were wondering. Favorite art style is impressionism. Favorite theme is the Annunciation.