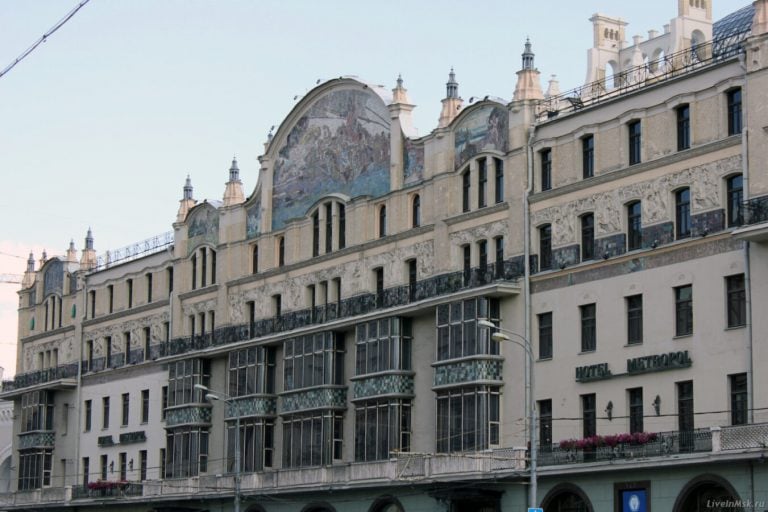 “Beauty is our religion” said Mikhail Vrubel, one of Russia's most famous Art Nouveau artists. The style of the fin de siècle acts as beauty's assistant to influence the improvement of the world. However, Russian Art Nouveau buildings do not get enough recognition worldwide in the lists of famous buildings of the Art Nouveau era. Let's fix this!

The Yaroslavsky Railway Station is one of the key buildings of Russian Art Nouveau. The initiator of this building is a Russian philanthropist from Savva Mamontov.

The elegant, colored ceramic decoration of the facades and the stucco storyline evokes in the viewer associations with the past. The natural beauty and riches of the Russian North. In short, this is a monumental gateway to the North of Russia. This style was also chosen because the Yaroslavl Railway connects Moscow with the northern provinces of Russia and the White Sea.

This is the first building of Fyodor Shekhtel, the wizard of Moscow Art Nouveau, in which his individual style was fully manifested. It was built for Stepan Ryabushinski, one of Moscow's richest merchants.

The mansion is a vivid example of a new type of home. Despite the abundance of intricate decorations, it is distinguished by elegant simplicity.

A wide strip of mosaic frieze depicts floral orchids. Apparently, it was Shekhtel himself that chose this motif - and these giant orchids remind us of the giant strawberries on the facade of the Yaroslavsky station. Despite the impressive size, the image only becomes clear once you get close up. From a distance, it looks like an ornament of colorful spots which creates a flickering effect. Moreover, in the mosaic there are pieces of golden smalt which are particularly enhanced during sunny weather.

Once you step into the lobby, a breaking wave floor pattern greets you, continuing the theme of the facade. At the very core of the house is the main staircase; a powerful, bend of a sea wave, above which rises a lamp in the form of an iridescent jellyfish. Consequently, the house has the air of a magical, underwater kingdom.

It was Savva Mamontov's idea to build this first-class European hotel, and combine it with a multifunctional cultural center. It was his idea to make it into a mixture of shops; a large artist's exhibition hall; halls for masquerades and dance evenings; a winter garden with an ice rink; a Russian chamber style restaurant and a grand opera house. As a result, the hotel now demonstrates a brilliant synthesis of art. This is a real open-air museum exhibition.

Majolica panels appeared on building facades at the end of 1900-1901. The largest of them is Princess of Dreams by Mikhail Vrubel. The theme of the panel is taken from the poetic play by Edmond Rostand. It is a suitable choice which captures the general mood of Art Nouveau: the beautiful princess appears before a dying knight. In her slight silhouette, we can see the features of Vrubel's future wife - Zabela, who often looks out at us from his paintings.

In 1901, panels by Aleksandr Golovin decorated hotel rooves. We can see both Greek and Egyptian motifs. Golovin was a theater artist, and one cannot but notice the playful, almost carnivalesque style of his panels.

Previously, a dark majolica strip with the words of Friedrich Nietzsche, “Again the old truth: when you build a house for yourself, you notice that you have learned something” surrounded the building. Unfortunately, only part this can still be seen.

This mansion is the combination of Art-Nouveau and Portuguese Neo-Manueline. Arseny Morozov, the nephew of Savva Mamontov, (yes, him again!), received a plot for the house as a gift from his mother. The architect for this project was Victor Mazyrin. He created this building in the Russian style. But Arseny resolutely rejected it. Moreover, the future owner couldn't decide what he wanted. As a result the customer and the architect had to go on a long journey - via Paris, Madrid, ... and Portugal. As a result, the “most unusual house in Moscow” was created.

Apparently, Mazyrin borrowed the seashells on the facade from the main attraction in the Spanish city of Salamanca - the famous house with shells - Casa de las Conchas, which belongs to the Gothic style. And the mosaic of the patio makes it look quite antique. Mix it up more, why don't you?

In the end, Mazyrin's contemporaries laughed at the mansion and called it "the house of the fool". There is even a city legend that when Varvara Morozova, the owner’s mother, saw the building for the first time she concluded:

“Before, I alone knew that you were a fool, and now all of Moscow will know”.

However, these days, many people stop to take a photograph of the house, while walking around the city.

Pertsov’s Apartment House is one of the most famous buildings in Moscow. The house is an embodiment of art-nouveau and neo-Russian style. From afar it seems extremely fabulous and complex. The Pertsov couple, Petr and his wife Zinaida built it primarily for themselves and in accordance with their tastes and needs.

The facades of Pertsov’s house are a set of symbols and ornaments. The panels include images of the sun, a bear fighting with a bull, giant fantastic flowers and luxuriant birds. Some of the drawings almost literally replicate the drawings of Finnish artist Akseli Gallen. These majolica panels fulfill the decorative task of making the house look fabulous.

Want to know more about this building which came as straight from a fairytale? Read the article here!

The Art-Nouveau style appeared in the years 1900-1904. The project incorporated an unusual architecture for the time, including an abundance of metal. All the sides are heavily decorated: there is a clock tower on the left side, reliefs of owls, and Roman-style columns on the east side.

The station building is one of the first Art Nouveau style public buildings. Its opening was received enthusiastically and it still it remains one of the city’s main attractions.

There has been a Muslim population in St. Petersburg from the first years of the city's foundation (1703). However, it was only during the 19th century, that the authorities gave the community permission to raise funds for a mosque. It took another quarter of a century before these plans became a reality.

Architect Nikolai Vasiliev used the Gur-e-Amir Mausoleum in Samarkand (early 15th century) as a prototype. As a result, of all Saint-Petersburg's Art Nouveau structures, the Cathedral Mosque is the most noticeable architectural accent. An unusual silhouette with a turquoise dome and high minarets decisively breaks into the panorama of the Neva river banks. The dominant composition is the dome, with its sparkling blue porcelain ornaments. The second highlight, is the main portal on the western facade. Against the background of the stone body, it appears delicate and refined in design, a shining carpet of bright colors. The intricacies of the parts are simply beyond description! That is to say, this Art-Nouveau diamond was definitely worth the wait.

The architect of this building, Mikhail Kvyatkovsky, received an order for the house in 1902 from Alexey Nuichev, a Samara contractor. The building housed an educational institution - the gymnasium of the Kharitonov sisters. Today, it is a technical school. Imagine entering such great architecture every day! Certainly, these are lucky students!

The building is richly decorated with flowers, butterflies, coiling ribbons, various curls - and even elephants!

In the late 1980s, restoration began on the house, and a large number of decorative elements were removed and sent for reconstruction (including almost all of the elephants). However, the project ran into difficulties and all of these details were lost. Sadly, no one has continued with the restoration.

Oh, the movie Grand Budapest Hotel was not filmed here? Hmm ... maybe someone should think about a Russian remake? The scenery is all ready!

The first version of the three-story Grand Samara Hotel was made of brick and had a stucco facade, which was typical of the late 19th century. It appeared in its current Art Nouveau form, in 1909. At the request of its then owner, the merchant Elizaveta Subbotina, the facade and interiors were reconstructed in the Art-Nouveau style by Mikhail Kvyatkovsky (the same man who is responsible for the previous handsome building).

Fun fact: Feodor Chaliapin, a famous Russian opera singer, stayed in the hotel in 1909 and has a room named after him!

People used to call this building the "Сhess house". It was the first and for a long time the only Art Nouveau building in Nizhny Novgorod.

The owner of the house, Aleksandr Troitsky, loved gambling but he preferred to bet exclusively on chess games. On one occasion, he lost all of his savings to the well-known Russian chess player, Grandmaster Mikhail Chigorin. However, acting nobly, Chigorin returned every last penny to Troitsky but made him promise to stop gambling on chess.

In memory of Chigorin, Troitsky ordered a sculptural composition of two augurs with lion heads to be built on the roof of the house. The heads seem to lean over the chessboard, considering their next move.

The porch resembles the shape of a horseshoe. Troitsky believed it was a talisman for players, bringing them good luck. In addition, the windows of the gambling hall were positioned west-facing for the convenience of the chess players: so even in the evening they could use daylight.

Today this historically valuable example of Russian Art Nouveau is in a critical condition. Therefore, it will have to be demolished and rebuilt. So, only time will tell if  the new Chess House will be an exact copy of the original.

I am sure that you now want to pay a visit to all of these Russian Art Nouveau sights! And make sure you include some world-wide visits as well. Read this article to draw up your map!

And if you want to know more about the style itself, check out the Art Nouveau explained in GIFs!

Read more about architecture in Russia: