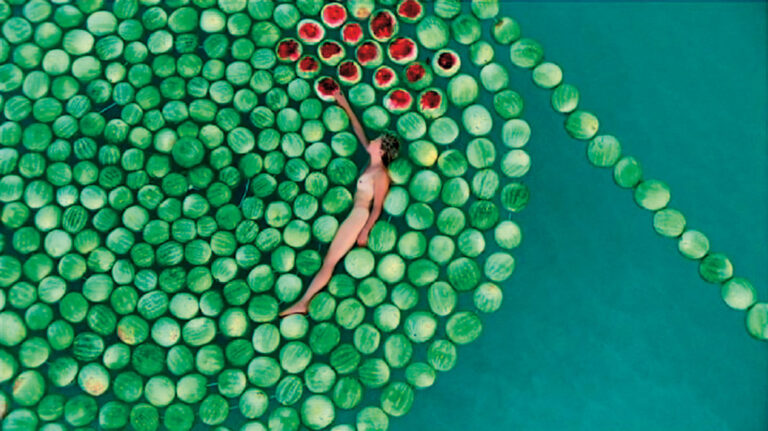 The Amazing Flesh of Chaim Soutine

Artist Sigalit Landau is one of the most successful Israeli artists in the world. Her sculptures, videos, and installations have been exhibited over the years in museums such as MoMA, Museum der Moderne Rupertinum, and the Israel Museum. Inspired by her childhood vacations, she creates many of her works in the Dead Sea, a natural salt lake in the middle of the desert.

Situated between Israel and Jordan, the Dead Sea is an exceptional environment. At 430.5 meters below sea level, it is Earth’s lowest place on land. This salt lake also contains over 9 times as much salt as regular ocean saltwater. The great amount of salt causes two phenomena: extreme buoyancy and calcification of salt.

The Jerusalem-born artist uses both the extreme buoyancy and the calcification process to create her art. For example, for one of her most known works, a video installation titled DeadSee, she created a spiral rhapsody made of watermelons. Due to the buoyancy, the rhapsody is able to float calmly while Landau herself floats between the watermelons. This work has been compared to the famous 1970 installation Spiral Jetty created by American artist Robert Smithson in the Great Salt Lake in Utah.

Landau also uses the salinity of the Dead Sea to create her sculptures. She sinks a variety of everyday objects in it, from clothing pieces or musical instruments to bicycles. After some time in the water, nature takes over the job: salt calcifies forming a thick layer that transforms the objects into sculptures. When Landau and her team finally pull out the objects, they look completely different and are covered in shiny white salt. Some of them are so heavy that a crane is needed to pull them out.

Though much of her artwork relates to issues occurring in Israel, Landau’s unique and experimental work gained her international recognition.

If you’re interested in the artist’s oeuvre, we recommend the book Sigalit Landau: Salt Years, published in 2019, that celebrates her 15-year artistic journey in the Dead Sea.