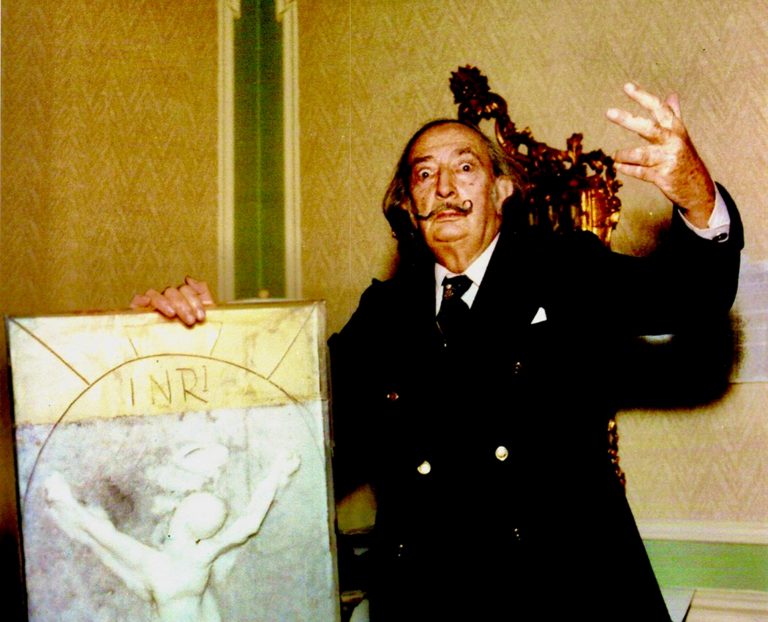 Salvador Dali Exhumation Shows The Truth About His Fatherhood And Mustache

On 11 May, 2022, Harte International Galleries announced the discovery of a long-lost bas-relief wax sculpture of the original Christ of St. John of the Cross created by Salvador Dalí which was held in a vault of a private collector for more than 40 years. With more than 900 sculptures made, the “Lost Wax” is the only wax rendition in the entire world.

A wax sculpture by Salvador Dalí, long thought to be lost to time, has supposedly been rediscovered. Completed in 1979, a decade before Dalí’s death, it depicts Jesus crucified above a nondescript body of water and is loosely based on a 1951 painting by the artist. Both are called Christ of St. John of the Cross.

Harte International Galleries has sold a number of the Christ of St. John of the Cross bas-relief sculptures throughout its history. However, no one thought the original work, done by Dalí in wax, still existed.

This sculpture served as the model from which hundreds of platinum, gold, silver, and bronze editions were made. Most art experts thought that the original wax, created by the Surrealist’s own hands, was lost in the process, thus the term “Lost Wax.”

This long-unseen sculpture was discovered and subsequently acquired by Harte International Galleries Co-Owners Glenn and Devon Harte from a private art collector who stored the sculpture in the original plexiglass box that Dalí used to hold the piece while working on it. As for its worth, the gallery has valued the sculpture at $10–20 million, although a representative said it is not for sale.

Harte and his team were in touch with the collector, who wishes to remain anonymous, about acquiring an art book. Then they learned about the existence of the sculpture late last year. They purchased the work, gave it the title Lost Wax, and now plan to exhibit it for the first time since Dalí himself was alive.

Dalí did everything he could to ensure this piece would remain intact and well-preserved for years to come.

Harte International Galleries worked with Nicolas Descharnes, the most recognized Dalí expert and final authority for many top auction houses. Descharnes’ father, world-renowned Robert Descharnes, served as Salvador Dalí’s secretary until his death. For more than 40 years, the Descharnes family has fought to protect Dalí’s legacy from forgeries and fakes. Located in Tours, France, Descharnes worked with world-renowned iconographic expert Carlos Evaristo for the authentication of the sculpture.

“Following the discovery of the Lost Wax, Harte Galleries met with Descharnes and Evaristo in Avila, Spain, which is where St. John of Spain, a 14th century monk, was inspired to draw the first impression of Christ on the cross from a heavenly view,” said Harte. “Evaristo was passionate that the sculpture was a three-dimensional representation of the evolution of Christ’s crucifixion and therefore given the same name as the most important religious work ever created by Dalí, Christ of St. John of the Cross, which was painted in 1951, 28 years before the molding of the sculpture. This painting now hangs in Kelvingrove Art Gallery and Museum in Glasgow, Scotland.”

Glenn and Devon Harte were recently knighted in Spain for contributing a bas-relief of Christ of St. John of the Cross to an affiliate of the Portuguese Royalty. In the attached photograph, Glenn and Devon Harte pose with Princess Owana of the Kingdom of Hawaii in Santiago de Compostela, Spain on 7 May, 2022.

With 11 May, 2022, marking Dalí’s 118th birthday and this piece having never before been seen, Harte International Galleries plans to share the “Lost Wax” with the public so art and history enthusiasts may experience this remarkable piece of art.

For more information about Harte International Galleries, visit their website.

From now until April 2023, the Casa Buonarroti Museum in Florence will host the restoration of Artemisia Gentileschi’s Allegory of Inclination.

Royal portraiture is a centuries old tradition, but it might be called the forerunner of the posed selfie – an artfully curated image which is...