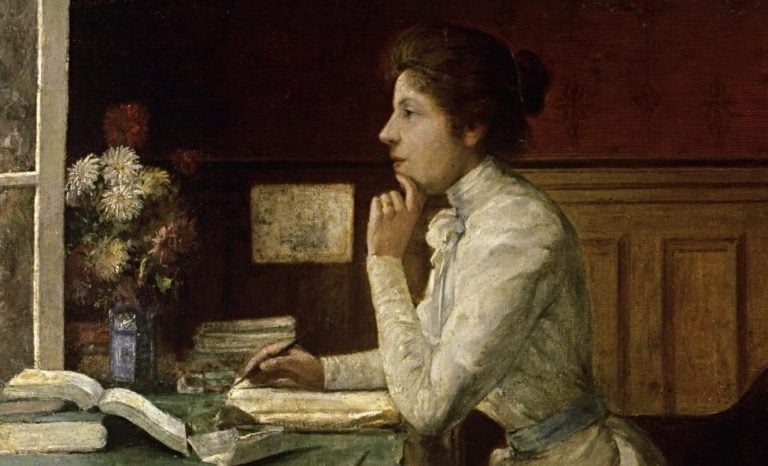 History of art is full of fascinating female artists: Artemisia Gentileschi, Mary Cassatt, Tarsila do Amaral, Tamara de Lempicka… Now, I would like to present another one, who produced beautiful self-portraits: the Brazilian painter Abigail de Andrade.

Most of the women who made art their profession had some problems since unfortunately, art had been, at many moments in history, an activity dominated by males. Sometimes, women would serve only as models or, if they were the ones to produce art, they were still considered amateurs. In Brazil of the 19th century, the Imperial Academy of Fine Arts didn’t accept female students. Thus, girls had to turn to private teachers, and still, they were taught to make “decorative paintings” which would serve as mere decorations of houses.

Everything changed in 1840 when the Academy accepted women’s works for its major art contest and exposition. However, none of the female participants had received the top prize – the gold medal. This changed when Abigail de Andrade, a young painter, had two of her winning works in the Salon of 1884. Her work is a testimony of the real condition of being a woman, and being an artist in Brazilian society.

De Andrade was born in 1864, in Vassouras, a small city in the state of Rio de Janeiro. She began her art studies at the Liceu de Artes e Ofícios. Liceu was the alternative school for women who wanted to study art. While most of the girls at the time were painting flowers, still lives, and decorative motifs, De Andrade’s interest was different: she portrayed genre scenes, daily life situations, and self-portraits, something unusual for women at the time. Without official academic training, de Andrade was not allowed to sketch a living model, so she used herself to practice.

In her first self-portrait (above), she emphasizes the artist’s confidence in her own craft. Notice how she presents herself attentive to her work, while beside her, there are a series of papers on the floor, possibly studies revealing a skill that requires constant training.

In A Woman Seated Before a Desk, de Andrade sits in front of the window. She’s writing a letter, completely lost in thought. But it is in A Corner of My Studio that the artist will reveal a series of complex meanings. The picture shows the artist talking to an old lady – the painter’s aunt – while working on a canvas.

The studio suggests that its owner is not an amateur painter. On the walls, there are paintings, sculptures, a copy of Raphael’s putti, flowers for studies of still life, and brushes. It is a completely artistic space, which also represents the artist’s need to know the old masters and to deepen her studies in art.

Note that de Andrade turns her back to the observer. This is not a random choice. What she wants to draw our attention to is the work she is creating, not her looks. This painting is beautiful because it shows how de Andrade is exercising her right of choice to be a professional artist in a country that doesn’t give this status to a woman.

This work was one of the winners in the Salon of 1884 and for good reason. De Andrade received very positive reviews about her work. But it was always remarked that she was a woman to remind her that she was still just an amateur. The painting, however, tells us another version as it demonstrates the professional attitude and seriousness with which de Andrade treated her activity.

Unfortunately, de Andrade died of tuberculosis in 1891. She lived in France with Angelo Agostini, an Italian painter who was her teacher, partner, and father of her children. The artworks of the Brazilian painter Abigail de Andrade are a manifesto on the artistic conditions of many 19th century women. And we should have no doubt that she’s among those fascinating women who should be remembered by the history of art.