Raqib Shaw, After A Midsummer Night’s Dream, 2017© Raqib Shaw and The Whitworth, The University of Manchester.

Raqib Shaw was born in Calcutta in 1974 to a family of luxury goods merchants who sold rugs, shawls, jewels and antiques, hence already from a young age, Shaw was immersed in the world of jewellery, carpets, and fabrics, which had an undoubted influence on his art. Raised in Kashmir, he often recalls traumatic scenes he was to witness: I survived the civil war. I've seen loss and helplessness. I could not stay back in Kashmir and fight for independence. But what I can do is capture the beauty and the pain of Kashmir through the painting. [caption id="attachment_16035" align="aligncenter" width="574"] 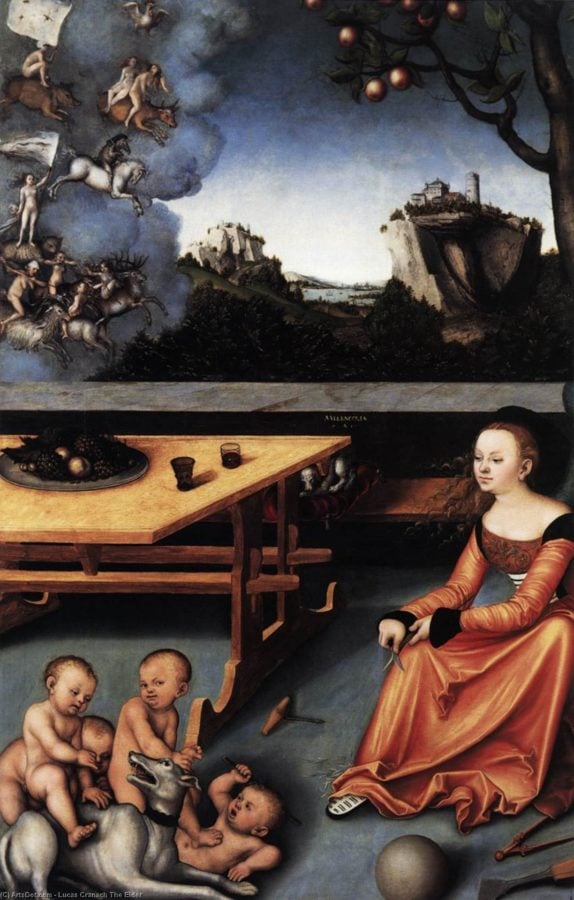 Lucas Cranach, An Allegory of Melancholy, ca. 1528, On long term loan to the National Galleries of Scotland.[/caption] Shaw’s version of Cranach replaces Saxon hills with a Kashmiri landscape, cavorting infants with a bubble showing a room in his house, and the figure of Melancholy is his self-portrait. Identical in size to Cranach, the painting is a very personal allegory of melancholy for his land destroyed by war and his own house in London destroyed by fire. [caption id="attachment_16027" align="aligncenter" width="640"] 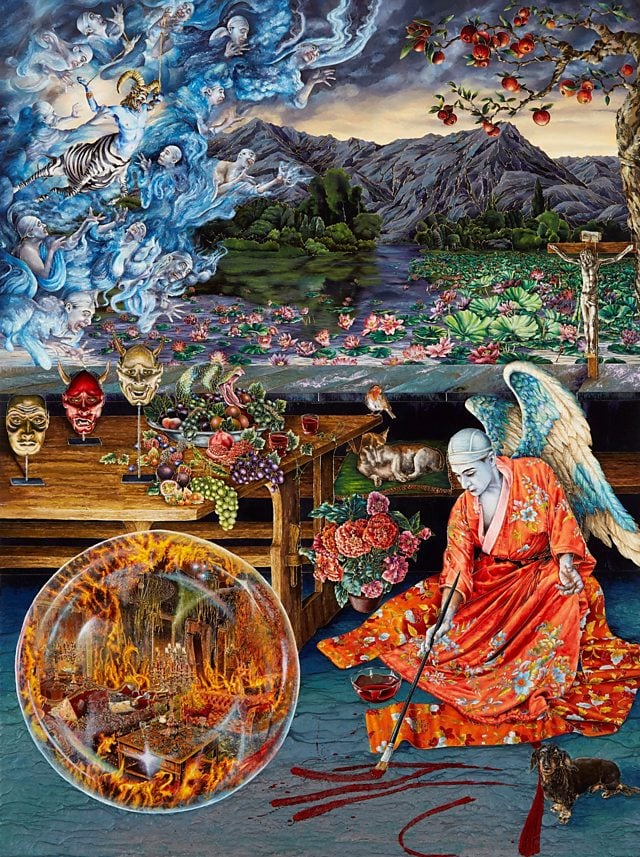 Raqib Shaw, Allegory of Melancholy (After Lucas Cranach the Elder), ca. 2017-2018, © Courtesy Raqib Shaw and White Cube[/caption] Apart from the impact that his childhood in India had on his art, the next strong inspiration was the European Great Masters he had a chance to admire for the first time in his life at the age of 18 when he visited the National Gallery in London. He became mesmerized by the artists like Hans Holbein the Younger, Sandro Botticelli, and Agnolo Bronzino, whose attention to detail and mastery of execution were to become the qualities he reproposed in his own art. He recalled the detail of a painting by Lucas Cranach that particularly drew his attention: When I first saw the Cranach at the National Gallery, which was Venus and Cupid, what struck me was that Venus is wearing the hat of the day. So it is a fashionable lady of that particular moment in time, and you see that marriage of antiquity with so-called current fashion - I thought that was a fabulous painting. [caption id="attachment_16023" align="aligncenter" width="745"] 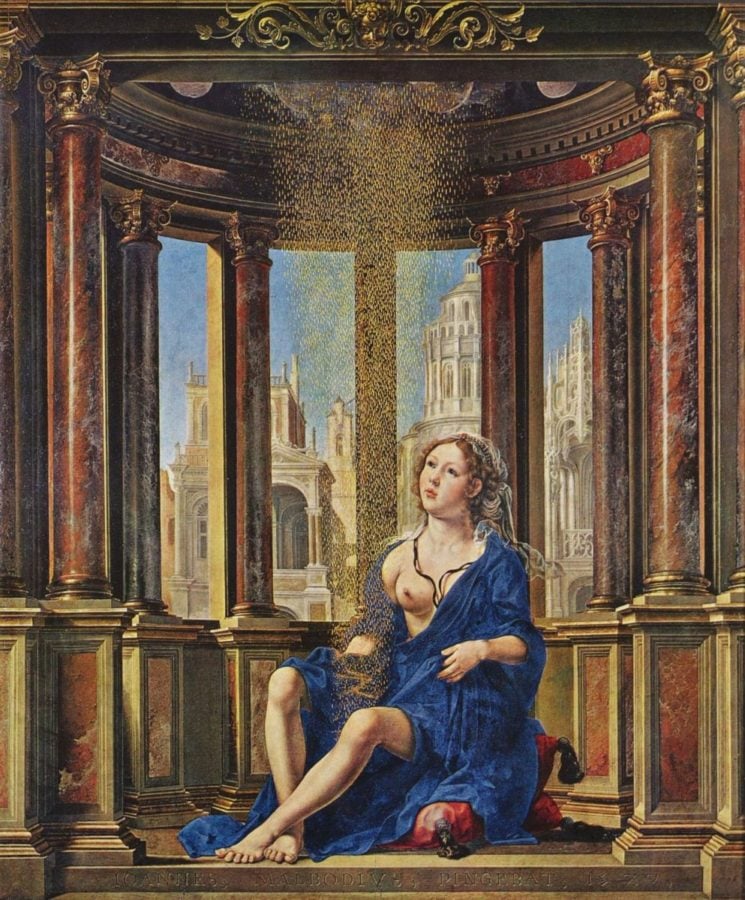 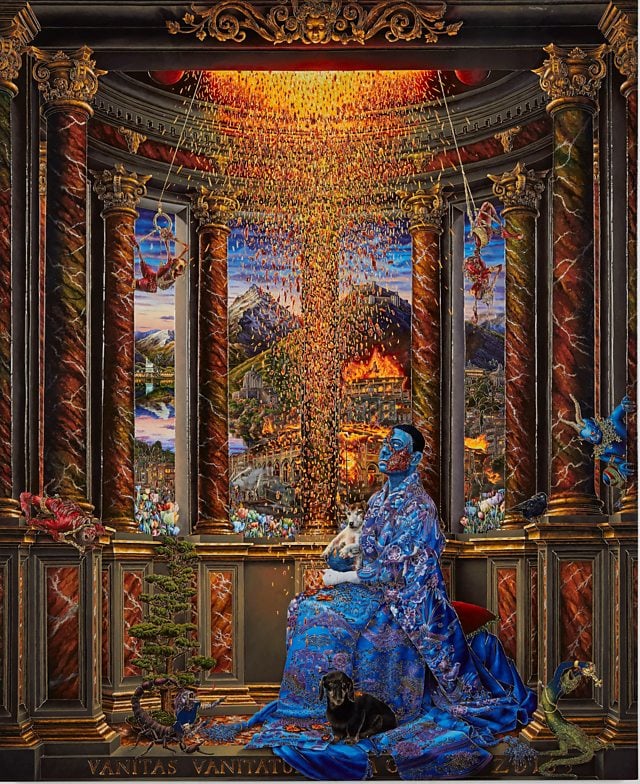 Raqib Shaw, Kashmir Danaë (After Jan Gossaert), ca. 2016-17, © Courtesy Raqib Shaw and White Cube[/caption] By the time Shaw had enrolled at Saint Martins College in London in 2001, he had already attracted some of the world’s leading art institutions. He has remained in London since university and now works and lives in a former sausage factory in south London. Sadly, hours after he had completed his painting about Kashmir Danae in 2017, his studio was ravaged by flames destroying many of his works. He commented on this event: It's a fabulous scenario of life imitating art. [caption id="attachment_16034" align="aligncenter" width="580"] 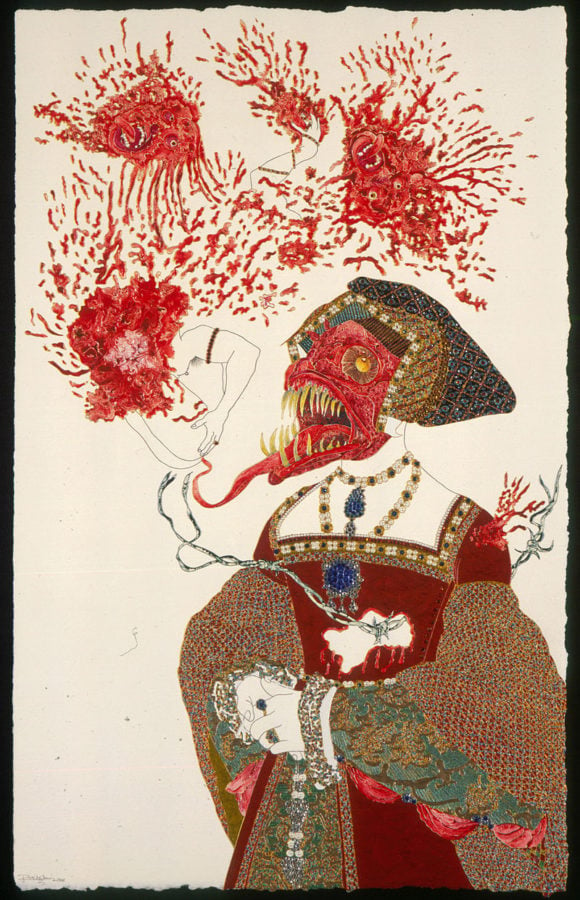 Raqib Shaw, Jane, 2006[/caption] Although his paintings are inspired by the Great Masters, the narratives Shaw builds are totally his own- he usually chooses himself as the protagonist, clutching one of his pet dogs, while the objects, as well as decorative elements he inserts, evoke tradition and art of Hinduism and Buddhism, and the India of his memories. [caption id="attachment_16037" align="aligncenter" width="534"] 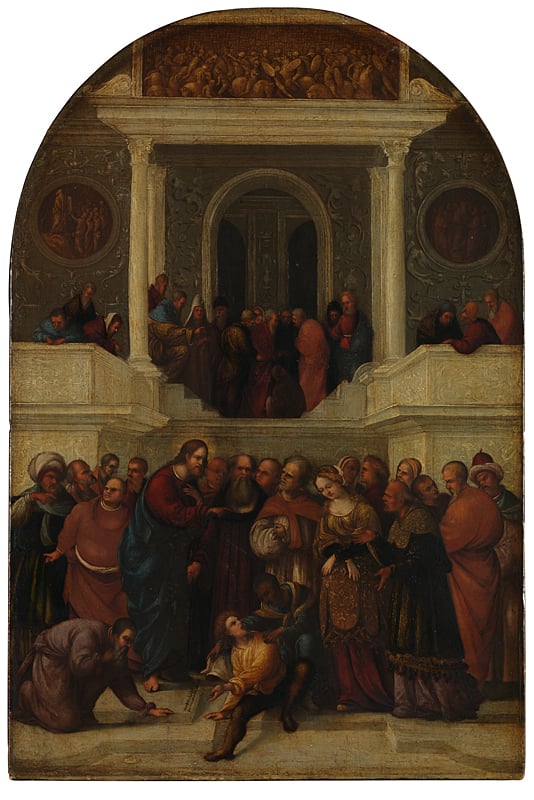 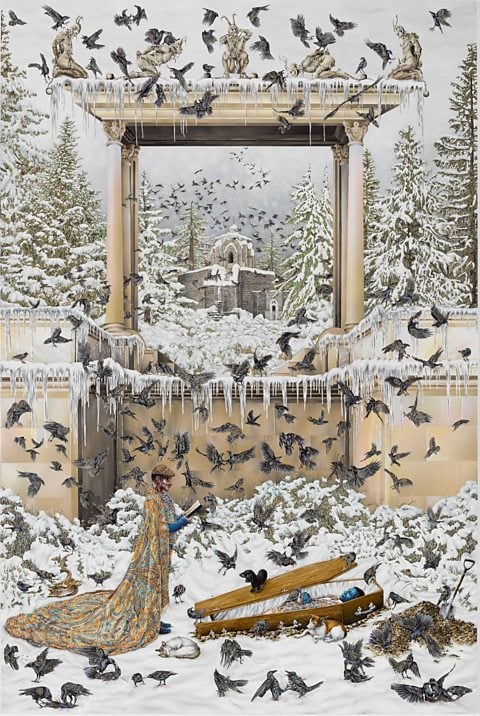 Raqib Shaw, Last Rites of the Artist’s Ego at Shankryacharya Temple (after Ludovico Mazzolino), ca. 2015-16, © Courtesy Raqib Shaw and White Cube[/caption] Also, his painting technique is entirely new and unique. He transfers preparatory drawings, tracings or photographic studies on wooden panels to cover later the design with acrylic liner, which leaves a slightly raised line. Then, he paints between the lines with a mixture of household gloss based paints and Hammerite, which is a tough enamel paint designed for outdoor metal surfaces. He spends months painting and needs help of multiple assistants since he paints one tiny drip at a time using needle-fine syringes and a porcupine quill. The finished works present magical resplendent worlds in their colour and detail complexity. Simon Groom, the Director of the Scottish National Gallery of Modern Art, where at the moment you can view Raqib Shaw's works, said: The size, complexity, technical accomplishment and audacity of his work are something to behold – some of the pictures have, not surprisingly, taken years to paint. They are absolute visions of delight and awe, and I defy anyone not to lose themselves in the works.