5 Gems of the National Gallery in Edinburgh 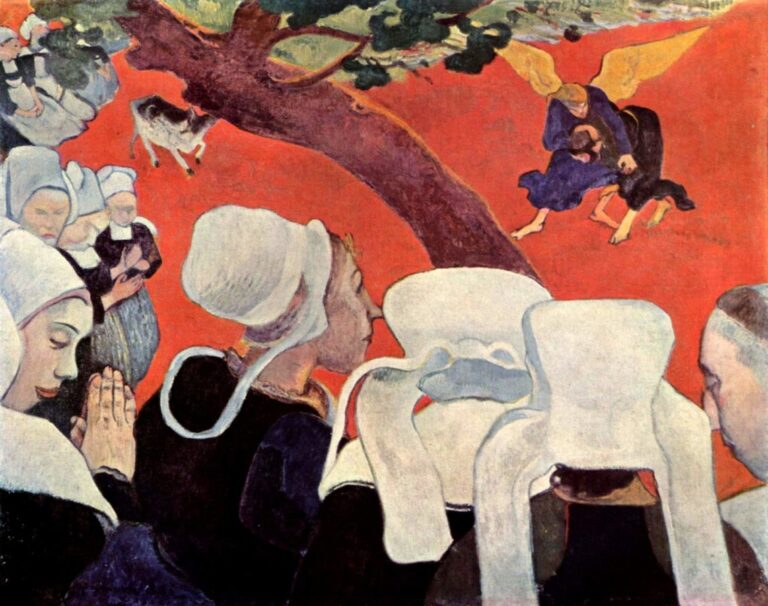 Happy St Andrew’s Day! St Andrew, one of Jesus’ disciples, is Scotland’s patron because the Scots believed to have descended from the Scythians who lived on the shores of the Black Sea in what is now Romania and Bulgaria and who were converted by Saint Andrew. I was wondering how to honour this day and I think the best way is to encourage you all to visit Scotland. Not only does it have beautiful landscapes and wonderful people, but also its museums and art galleries are free and accessible to everyone!

This painting from 1888  was made in Pont-Aven, Brittany and it is one of Gauguin’s most famous works because it evidences his personal journey towards synthetism. The Breton women, dressed in distinctive regional costume, have just listened to a sermon based on a passage from the Bible which  relates the story of Jacob, who, after fording the river Jabbok with his family, spent a whole night wrestling with a mysterious angel Genesis (32:22-32). In a letter to Van Gogh Paul clearly stated that “For me the landscape and the fight only exist in the imagination of the people praying after the sermon.” This imaginative atmosphere is summed up by the unrealistic use of bright colour which becomes very flat, and strong contours. The red background and the tree brunch are also references to Japanese woodblock print.

I wish I had been so talented at the age of 18 as him- Velázquez was eighteen or nineteen when he painted this scene, which made part of a whole series of tavern and domestic scenes called ‘bodegónes’ in Spanish still lifes with kitchen utensils, which can include a figure though). His fascination with contrasting materials and textures and the play of light and shadow on opaque and reflective surfaces is brilliantly rendered, especially visibly in the eggs cooking in hot oil and the varied pots and pans. How do you think- is the boy a little helper, or rather a thief taking advantage of woman’s blindness?

I just love this one, this gentleman looks so classy on ice, his pose so effortless! He is thought to be the Reverend Robert Walker, minister of the Canongate Kirk and a member of the Edinburgh Skating Society. The club – the oldest of its kind in Britain – usually met on the frozen lochs of Duddingston or Lochend on the outskirts of Edinburgh. Sir Henry Raeburn was a Scot who moved to London where he met the maestro Joshua Reynolds. He went on a Grand Tour to Italy, but returned to Edinburgh in 1787 where he began painting portraits of the important people of his day.

I wrote about this painting in the post about the most famous Vermeer forger and you can go and see it in Edinburgh.  It is likely that this scene from the Gospel was a specific commission since we don’t know any other of Vermeer’s works which have a biblical theme. It is also the largest and one of the earliest surviving paintings by Vermeer.

Oh, how much I love Rubens! Look at these robust bodies, full of vitality and dynamism! Colours are so strong and bright that one feels to be one of the guests of the feast. And what a feast it is when the main dish turns out to be John the Baptist’s head! Scrummy! This picture was probably painted for Gaspar de Roomer, a Flemish merchant based in Naples, and inspired a number of Italian artists. (If you go to see this painting life, try to spot the sweet dog which is not visible on the photo here.)