Painting of the Week: Raphael, Transfiguration 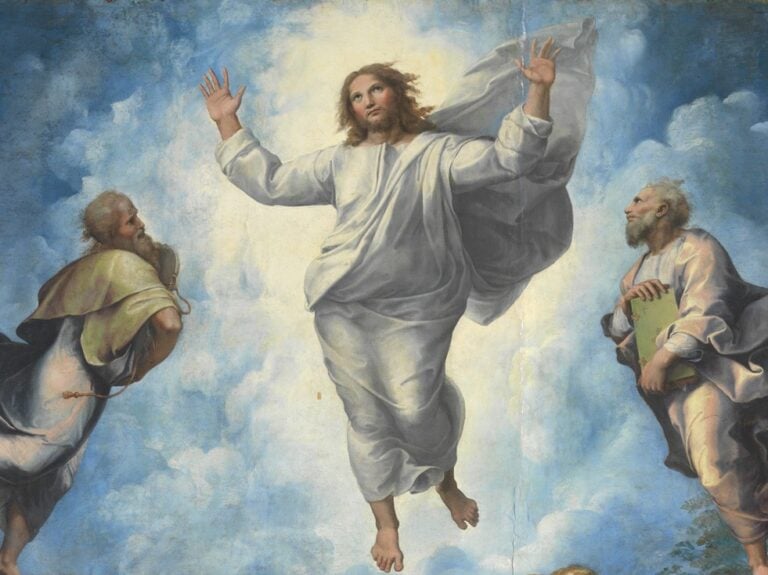 The Transfiguration was the last painting created by Raphael. Commissioned by Cardinal Giulio de Medici, the later Pope Clement VII (1523–1534) and conceived as an altarpiece for the Narbonne Cathedral in France, Raphael worked on it until his quite mysterious death in 1520.

The huge painting (410 x 279 cm) was not sent to France because after artist’s death the cardinal kept it for himself, subsequently donating it to the church of S. Pietro in Montorio where it was placed over the high altar. From the late 16th century until the early 20th century, it was said to be the most famous oil painting in the world. Now it is in the collection of the Vatican Museums.

Which is quite unusual, the composition of The Transfiguration is divided into two distinct parts which illustrate two episodes narrated in succession in the Gospel according to Matthew: the Miracle of the Possessed Boy on a lower level; and the Transfiguration of Christ on Mount Tabor, in the background. The transfigured Christ floats in an aura of light and clouds above the hill, accompanied by Moses and Elijah. Below, on the ground, are his disciples.

Transfiguration can be considered as an intro of both Mannerism, as evidenced by the stylised, poses of the figures at the bottom of the painting; and of Baroque painting, as evidenced by the dramatic tension we can sense between those figures, and the strong use of chiaroscuro throughout.

At the end, famous 16th century biographer Giorgio Vasari wrote in his Lives of the Most Excellent Painters, Sculptors, and Architects that the Transfiguration was Raphael’s “most beautiful and most divine” work. We can agree with that!