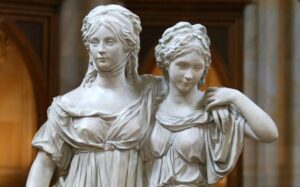 An unassuming and charming statue group, the Prinzessinnengruppe (Princess Group) 1795-1797, depicting Prussian Princesses Louise and Frederike, by Johann Gottfried Schadow is filled with a fascinating history. Marveled during its day, it was hidden away and forgotten for almost 90 years. Recent research and restoration conducted by Alte Nationalgalerie gives more insight and breathes new life into this refined piece of Neoclassical work.

The marble statue Prinzessinnengruppe is a key piece at the Alte Nationalgalerie in Berlin. It is located in the prominent location of the concourse, greeting visitors directly upon their entrance. Crown Princess Louise of Prussia (on the viewer's left) and her younger sister, Princess Friederike are draped in Classical style dress in the latest trends of 1797. Louise's head and neck scarf are also fashionable, with some debate as to whether or not this is covering a swelling in her neck. The sisters are in contemporary clothing - not in royal garb. They could easily be any German girls of the time. Up close the work is so delicate and ethereal. This is typical of Schadow’s Classical influences and his idealized but naturalistic style.

Schadow (1764–1850) was a German Prussian Neoclassical sculptor whose most famous work is the chariot on top of the Brandenburg Gate in Berlin. In the 1780s he became a sculptor in the German court.

The two sisters were both married to Prussian Princes in December 1793. Their father in law, King Friedrich Wilhelm II, was so taken with his new daughters-in-law he commissioned Schadow to do their portraits in sculpture. Schadow originally carved busts of the two Prussian princesses, then did a plaster version of the full-length statue (this is now in the Friedrichswerder Church in Berlin), and finally the marble version. Most of the marble version was carved by Schadow’s assistant, Claude Goussaut, who also worked in the court. Schadow completed the final details and was paid 5,000 Reichstaler for his work.

Louise is the elder sister who married Crown Prince Friedrich Wilhelm III. She stands tall with an outwardly directed gaze - set to become Queen of Prussia. Conversely, her sister Friederike looks more downward and demure, an indication of her younger age and status. The pose is very similar to Roman sculptural depictions of mythological siblings. The princesses were very close and well-liked by the public. It was also a special statue in that it was rare if unprecedented for two women, particularly young girls to be depicted together. Normally, this type of work was reserved for men of renown or merit. The work was well received by the public and critics, but Louise’s husband did not care for the way she was pictured. So it was hidden away and forgotten about for several decades.

Louise was extremely popular and admired in her time. She was happily married and involved in state affairs. A contemporary writer said of her:

"The more perfectly one becomes acquainted with the Princess the more one is captivated by the inner nobility, and the angelic goodness of her heart."

She passed away at only 34 of a mysterious illness, adding even more to her mythic status with the Prussian people.

Frederike was two years younger, with a life very different from her sister. Her first marriage to Prince Louis lasted only three years when he died of diphtheria. He had numerous affairs during their marriage. She was engaged numerous times and married twice more. Each marriage tumultuous and with several pregnancies and losses. She lived to the age of 63.

Both the plaster and marble versions require a great deal of cleaning and repair. In the past few years, work has gone into studying and restoring them. So iconic is the pair, that you can buy replicas ranging from a few centimeters tall to larger than lifesize. The two sisters remaining forever entwined and immortalized in a tender and poignant tribute.

Read more about the Alte Nationalgalerie in Berlin: