Pan Yuliang: The Queen of Self-Portraits 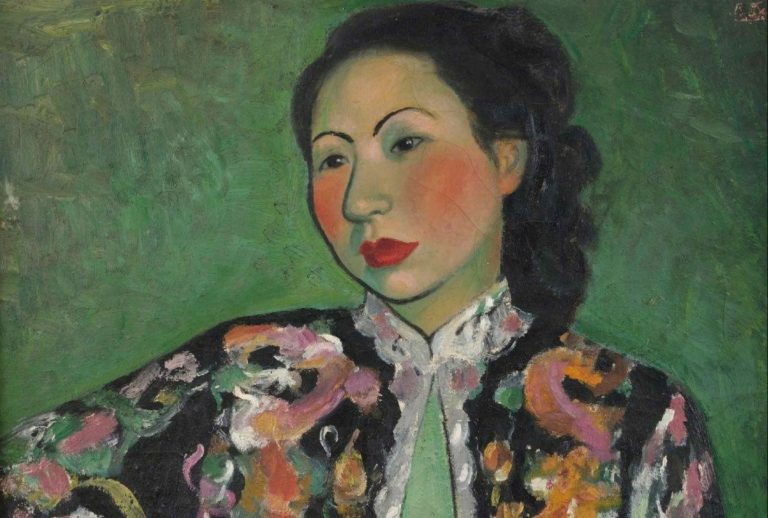 Qi Baishi, China’s Master of the Ordinary in an Extraordinary Way

Pan Yuliang’s works are a celebration of her Chinese heritage and feminine selfhood. Born in Yangzhou, Jiangsu Province as Chen Xiuqing Pan (1895–1977) was orphaned at the young age of 14 and was adopted by her maternal uncle who renamed her Zhang Yuliang. She was sold into prostitution when she met her future husband, Pan Zanhua, a wealthy customs official. Pan became his second wife and he supported her in pursuing art education. Later Pan adopted his name as Pan-Zhang Yuliang.

Yuliang moved back to Paris in 1937 after facing severe criticism for her paintings in China and produced a prolific number of oil paintings until 1942. The Woman Before the Window combined Western and oriental styles of painting. Bold colors like blue and red highlight the nudity of the sleeping woman. Her face is flushed and her body is exposed to the viewer. The presence of the open window in the background suggests the woman is both in a private space and visible to the outside world.

Drawing nudes was a taboo subject for women artists in China, thus Yuliang had to visit public bathhouses to find her subjects. Song of Spring (Three Ladies) is one of her early works that reflects her exposure to European artistic movements like Impressionism. The painting depicts three female nudes in an idyllic landscape. The women have oriental features, except for the one woman in the center who has golden hair. It seems Yuliang was seeking acceptance from European audiences while also addressing her Chinese roots.

Yuliang captures her admiration for the female body in Woman Watching a Cat. This is the woman’s private space. She is lying sideways with her back towards the viewer, looking at the cat. The artist’s signature can be seen in the upper left corner of the painting.

Nude Sitting in a Red Bathrobe depicts Yuliang’s comfort in using oil paint in color and black ink. The painting is her attempt to bridge the western painting of nude figures with the Chinese technique of outlining the figures. Her female nudes are not objectified however, the figures are portrayed as women of color, with dark hair and full figures that change with time.

Combing is another painting that captures a private moment of a female subject. The floral nightgown is meticulously painted with cherry blossoms, a symbol of feminine beauty, sexuality, and love in Chinese culture. Fine crisscrossed lines are used in the background with Yuliang’s signature “Yu Liang 61” and a red rectangle seal in relief “Yuliang Iron Wire”.

Painting the Uncertainty of Life

Rose captures the impermanence of life, some flowers are in full bloom whereas others are withering. The deck of playing cards, often used in fortune-telling, further adds to the concept of the uncertainty of life.

One of Yuliang’s unconventional works, Massacre depicts the aftermath of a war scene. Often innocent civilians are the victims of war. Dismembered bodies of men, women, and children lay on the street. The surviving victims are asking for help, while their cries mingle with the smoke from fires in the background.

Two Girls Dancing with Fans portrays the rhythm and movements of Chinese dance forms. The painting represents a strong Fauvist influence in the use of bright colors like reds and yellows. In this painting, the artist was experimenting with her visual language where she combined Fauvism, Pointillism, and Chinese calligraphy paintings.

Flower Stand captures a common scene on the streets of Paris. Yuliang combines two subjects that are central to her paintings: women and flowers. The flowers are painted in bright and bold reds and yellows. The fashionable customer in white offers a striking contrast to the vivid colors of the flowers.

Like her female nudes, Yuliang’s self-portraits are recurring subjects. In the 1939 Portrait of the Artist, Pan is sitting solemnly for the viewer. She wears a black cheongsam, the traditional dress of Chinese women. Her posture is relaxed and she is holding a light-colored hand-fan, which contrasts with the darkness of her dress. The artist is looking directly at the viewer with a sense of confidence that also hints at the melancholy of living away from her homeland.

Her 1940 Self-Portrait is reminiscent of Yuliang’s former portrait. Again she wears a black cheongsam but this time with an intricately embroidered dragon. She sits next to a vividly colored bouquet of flowers. It seems the red color of the flowers is reflected on her blushed cheeks. The portrait combines both the western tradition of a portrait with the Chinese tradition of calligraphic paintings. Her use of bold colors also suggests the influence of French Fauvism.

The Self-Portrait of 1945 repeats elements seen in her former self-portraits, such as a window in the background and the vase of flowers on the table. This time the flowers are in a muted yellow and the artist is shown standing, reclining on the table. She has replaced her traditional cheongsam with more western attire. However, what remains unchanged is her direct gaze towards the viewer and the solemn melancholic expression.

Although Pan Yuliang exhibited her works in different Parisian salons and received many awards, she was a fiercely independent artist. She refused to be represented by any gallery and spent her final years in poverty and solitude. As a woman rescued from a brothel, Pan honored her life as a free and dignified artist. Yuliang never returned home, she died in 1977 and was buried in the Montparnasse Cemetery in Paris.

The story of Pan Yuliang’s life has been adapted into films in China and France: the 1994 film by Huang Shuqin titled Hua hun (the soul of a painter) or A Soul Haunted by Painting and the French movie La Peintre. In 2008, Jennifer Cody Epstein wrote a biographical novel on Yuliang entitled, The Painter From Shanghai.