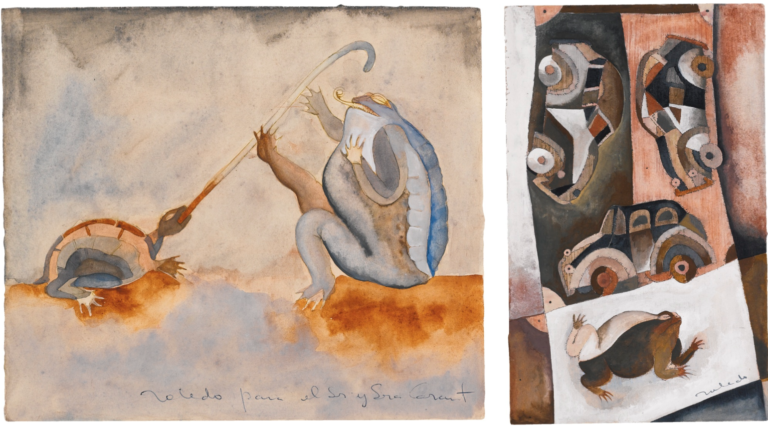 This is an unusual watercolor diptych by the late Mexican artist Francisco Toledo, who died this year. The work encompasses two totally opposite scenes; the sensual and intimate painting on the left hand side called Sapo con tortuga (The Frog with a Turtle), and the crowded yet alienating painting on the right, named Sapo con coches (The Frog with Cars). Both are unrealistic, magical and symbolic. They bring us to the omnipresent animal in Toledo’s oeuvre - a frog. The colours are very natural and organic while the vision is metaphorical and inspired by ancient, Zapotec legends.

The Frog with a Turtle

We the viewers, catch the frog and the turtle in flagranti. The closed eyes, the extended tongue and the open and stretched hands of the frog allude to joy, pleasure and satisfaction. It is a play between the animals, with the cane as a prop to unite them. It is a game of being close yet distant and above all connected and intimate.

This scene is painted in light colors and earthy tones of blue, red, orange and grey. By doing this, the artist brings softer emotions and a warmer atmosphere to show the animalistic and symbolic interplay.

The Frog with Cars

The second fragment of the work shows an absolutely different range of feelings. The color palette also changes into deeper, darker and colder tones of grey, brown, red and blue. The composition is crowded and the proportions unnatural. The frog is pretty much the same size as the three cars next to her.

The frog is alone, overwhelmed. Its eyes are also closed and the facial expression does not say much. The animal is immobile, frozen and collected. We do not know where she is going or whether or not the cars will run her over at some point.

Francisco Toledo paints with a soft and caring approach and manages to show a striking contrast between the two parts of this work. In this way, he gives the viewer the subtle range of emotions and very essential, human conditions. Sometimes realism is magical and Toledo found a way to express it skillfully and originally in this painting.

Painting of the Week: Tarsila do Amaral, Abaporú