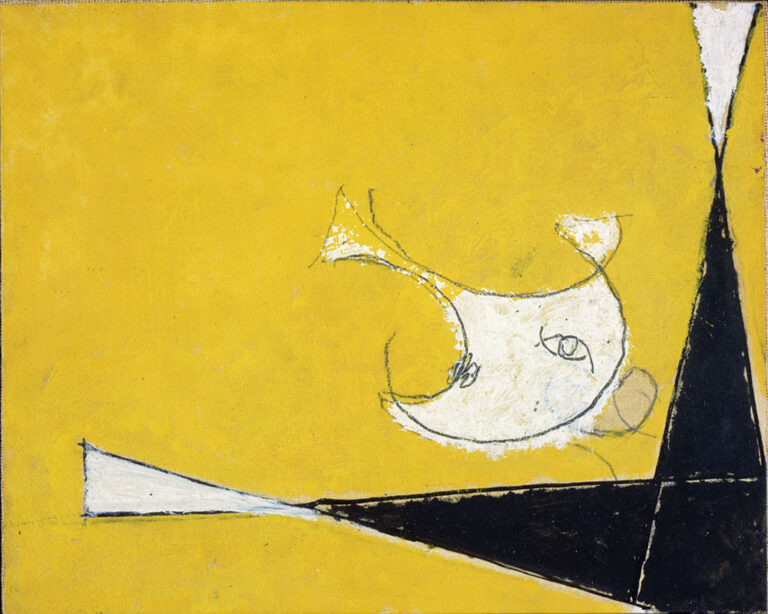 Let Sheer Folly Sweep Me Away is the name of a new retrospective in Peggy Guggenheim Collection in Venice dedicated to a Modernist Italian artist Osvaldo Licini (1894–1958). Open until January 14, 2019, it offers a spiritual and mystical journey in the company of characters inspired by literature, religion, and history. He who seeks certainty rarely finds it, said Licini and in his case, we can never be certain of the exact meaning of his work.

Licini was not satisfied with what was happening in Italian art so he decided to leave Bologna for Paris. He quickly felt at home in the lively artistic milieu of Montparnasse and the Café La Rotonde, where he befriended such personalities like Jean Cocteau, Moïse Kisling, and Pablo Picasso. He briefly met Amedeo Modigliani whose painting greatly influenced Licini’s way of representing the human figure, in particular the female nude. Licini wrote:

The organic lines of certain figures blossomed from the colorful impasto, plunging back into the flesh to create the impression of powerful relief, obtained effortlessly and without the use of shadows, with the simple play of line which alone gave a sense of all four dimensions.

The repeated visits and shows at the Salons and in renowned cafes between 1917 and 1926 made him become one of the most open-minded and art-trends-oriented Italian artists, a factor that contributed to his isolation within art circles at home. He never adhered to any movements or groups and chose to seclude himself in the village of his birth, Monte Vidon Corrado, where he breathed and painted the landscapes of the region of Marches.

When in the early 1930s the mainstream Realism supported the ideals of the Fascist regime, Licini turned to nonfigurative painting using however a pictorial language that was atypical for abstraction. Attentive to geometry but also to chromatic intensity, he usually avoided flat and compact backgrounds in favor of vibrant surfaces whose pictorial sensitivity infused his geometry with lyricism and turned images into sentiments.

Licini’s oeuvre is dedicated to mysterious characters of the Flying Dutchmen, Amalasunthas, and Rebel Angels, which suspended between abstraction and representation, hang among letters and characters with secret symbolic meaning.

For example the Amalasunthas, first presented at the Venice Biennale in 1950, depict our beautiful moon, guaranteed silver for eternity, personified in few words, friend to every weary heart. The name may have been inspired by the religious theme of the Assumption of the Virgin Mary (Pope Pius XII proclaimed the dogma of the Assumption at the end of 1950), but in Italian it is a wordplay which means a “badly ascended” which hence implies an inversion, a joke on the theme. The name may also pertain to the Ostrogoth queen Amalasuntha, who in the sixth century became regent for her son Alaric and therefore queen, a reversal of the roles usually imposed by gender, which fascinated Licini.

In a letter to a friend Licini explained how he turned to abstraction: Painting is the art of colors and forms, freely conceived, and it is also an act of will and of creation, and contrary to architecture, it is an irrational art, predominated by imagination and fantasy, which is to say, poetry. So, I took two hundred good canvases that I had painted from life and I brought them up to the attic. And four years ago, I began inventing my own paintings.