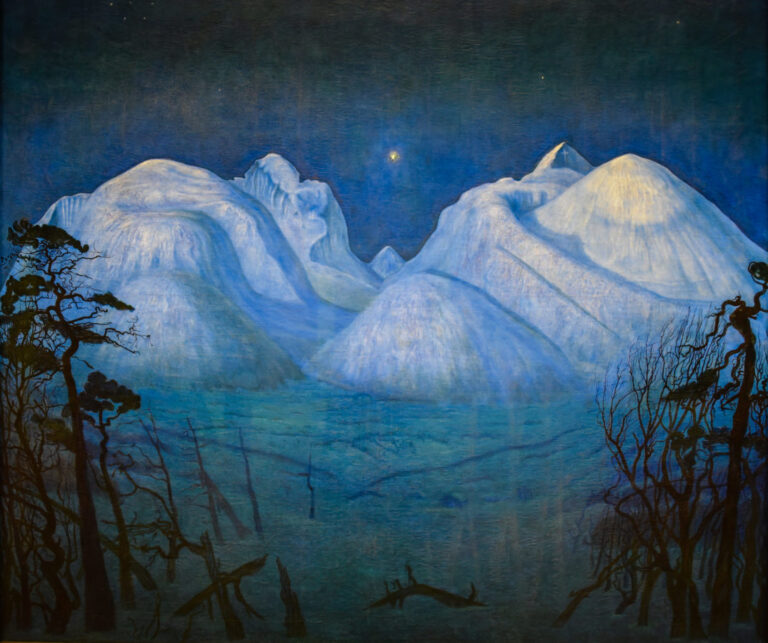 Harald Sohlberg was a Norwegian painter whose works can be described as “Neo-romantic”. He is particularly known for his depictions of the mountains of Rondane and the town of Røros. Perhaps his most widely recognized paintings, in several variations, is Winter’s Night in Rondane, presently featured at the Nasjonalmuseet for kunst, arkitektur og design in Oslo. Unfortunately, Sohlberg’s work remains little known internationally, and many of his significant paintings are in Norwegian public collections.

Sohlberg came from a large, middle class family with eight children. He did not finish school and instead became apprenticed to a decorative painter at age sixteen. He was very committed to the Romantic idea of the artist as solitary genius and tended to isolate himself for large periods of time, and devote himself entirely to his paintings. Like Munch, he was obsessively preoccupied with denying that the influence of other contemporary artists had been important to him. He dissociated himself from the discussion about where he belonged in the history of art, relegating the origins of his artistic awakening outside of art to his own psyche.

In an obituary, Pola Gauguin wrote that Harald Sohlberg was alone and forgotten: “A name which was famous in its day.” Now that Sohlberg was dead, Gauguin thought, “the coldness which he helped surround it with, will thaw”.

The function of line in his paintings was to express feelings. It could be lonely, down to earth, or melancholy. It could be willful and persevering as required. It should be developed according to the nature of the subject and the artist’s dialogue with nature. What interested him was his own experience and interpretation, regardless of how naturalistic his pictures appeared to be. Ideally everything in the picture was controlled by his will.

As an older man, Sohlberg longed for confirmation that the public saw the values he wished to impart: “it is probably true that for simple and naive reasons my works have aroused sympathy. But I maintain that they have by no means been properly understood for the pictorial and spiritual values on which I have been working consistently throughout the years.” The quotation contains three words which are keys to an understanding of Sohlberg: “Pictorial,” “spiritual,” and “consistently.” The pictorial is means for expressing the spiritual, and one was obliged to stick to the spiritual values one held true.