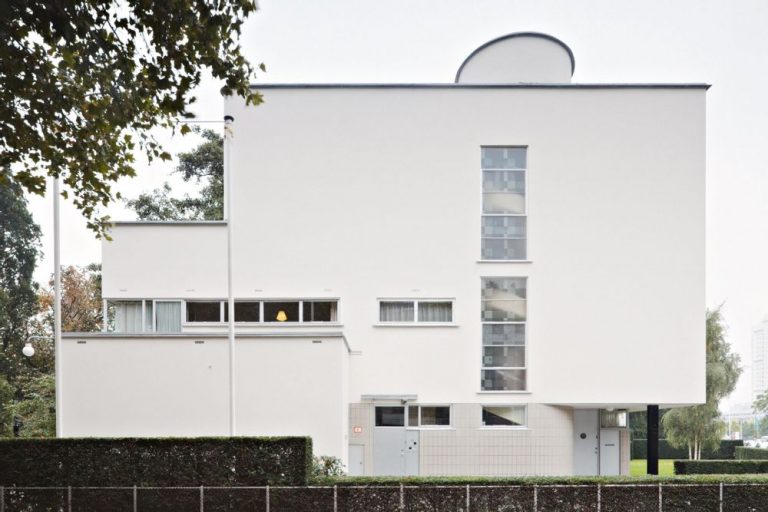 Visit the Sonneveld House Museum with us! It is one of the best-preserved examples of the Nieuwe Bouwen style, the Dutch branch of the International School of Modernism. Designed in the 1930s by architecture office Brinkman and Van der Vlugt, the Van Nelle Factory, and Feyenoord Stadium, it may look very ordinary today, however in the 1930s it was extremely modern. Sonneveld House shows how a prominent Rotterdam family embraced modernism and how that choice influenced their everyday surroundings.

The architects of the Sonneveld House designed a total concept with perfectly coordinated architecture, interior, and furnishings. The house has a skeletal structure which allows for gigantic windows, opening the interior to the surrounding garden. The structure also dispensed with load bearing walls and replaced them with sliding panels and curtains, thus achieving extreme flexibility of space.

The family comprised of Albertus Sonneveld, one of the directors of the Van Nelle Factory in Rotterdam, his wife Gésine Sonneveld-Bos and their daughters Puck and Gé. They lived in Sonneveld House from 1933 to 1955. Earlier they lived in a stately 19th century townhouse in the center of Rotterdam. When they moved, they left almost everything behind in the old house. The only items the family brought with them were artworks, books, clothing, and personal belongings. Everything else was new: furniture, furnishing fabrics, lamps, clocks, desk items, vases, tableware, and glasses. Nearly all items of furniture and lamps in the house were made by the firm Gispen, some of them especially for the Sonnevelds.

The Studio and Daughters’ Rooms

The studio was designed for the two daughters. They used it for reading, listening to music, and entertaining their friends. The studio contains a multifunctional sofa designed by Leendert van der Vlugt (1894-1936), including a bookshelf, cupboard, and sound system (a speaker, gramophone player, and control panel with knobs for volume and selecting radio stations). Furthermore, the radio connected to other rooms, allowing the family to listen to the music selected in the studio from all over the house.

Magdalena, the eldest daughter, nicknamed Puck, was 19 when the family moved to Sonneveld House. She got the larger of the two children’s bedrooms with a magnificent terrace accessible only from her room. The girls’ rooms had the same furnishings but in different colors: Puck chose blue. The daughters, Puck and Gé also shared a bathroom, located between their two bedrooms.

Like her sister Puck, Gé chose the color of her own bedroom too: yellow. Gé (short for Gesine), the younger daughter, was 13 when the family moved to Sonneveld House. Her friends remember how Gé’s mother sometimes collected her from school in her car. She was the only woman in Rotterdam with her own car.

The interior’s colors are warm and bright: vermillion red, cornflower blue, and canary yellow, combined with light and dark grey, and brown. The furnishing fabrics came from Metz & Co., including a range of colors designed by artist Bart van der Leck (1876-1958). In the sitting room and library, van der Leck’s yellow office chair and orange-red armchairs create accents against a more neutral palette of brown, bronze, and beige. In the bedrooms and dining room, the colors are reversed and bright colors are used for the large expanses: red dining room cabinets, blue curtains, and yellow for the flooring.

Mrs. Sonneveld appreciated the appliances that could make her life easier. She was a practical, decisive, and independent woman who did not like to waste time or money. This is clear from the many innovative gadgets in the house: the electric coffee grinder on the kitchen counter, the rubbish chute to the right of the door, the intercom system that enabled her to hear who was at the service entrance below. Also an electric lift helped transport delivered goods up to the kitchen or down to the cellar.

The wall surrounding the open fireplace in the library contained several ultramodern technical appliances as well. The lower door concealed a lift transporting the wood from the cellar. There was also a clock connected to the electrical circuit, which was highly exceptional at the time.

Mr. and Mrs. Sonneveld’s bathroom was the height of modernist luxury in the 1930s. When many houses still had no shower, this bathroom had two washbasins, a shower cabin, a bath (and a heated towel rack!) which were all exceptional. Mr. Sonneveld discovered the hydro-massage shower in luxury hotels in America. He had the large shower head and the nine smaller nozzles sent over from there.

The kitchen in Sonneveld House was fitted with all the modern conveniences. Only the cooker itself was a little “old-fashioned”. It is notable that the family did not opt for an electric stove, which many books of the period advised. Mrs. Sonneveld took a practical approach, preferring the quicker and cheaper gas.

The Sonnevelds’ maids earned 27.50 guilders per month plus food and accommodation. Mrs. Sonneveld personally took care of ordering supplies and arranging the menus. The maids took turns cooking meals and ate when the family finished eating. There was a bell on the dining table that set off a buzzer in the kitchen (a wire ran through the table leg to an electrical socket under the windowsill). The family also summoned the maids through the house telephone or through a system of buzzers connected to lamps, the color indicating where the maids were needed – the bedroom, dining room/living room, or the library.

The Sonneveld House Museum gives us a rare glimpse into everyday life in a luxurious modernist villa. A house full of light, all the modern appliances one may want, and a flexible living space, perfectly adjusted to the needs of its inhabitants.