The Eyes Have It: The Moai of Easter Island 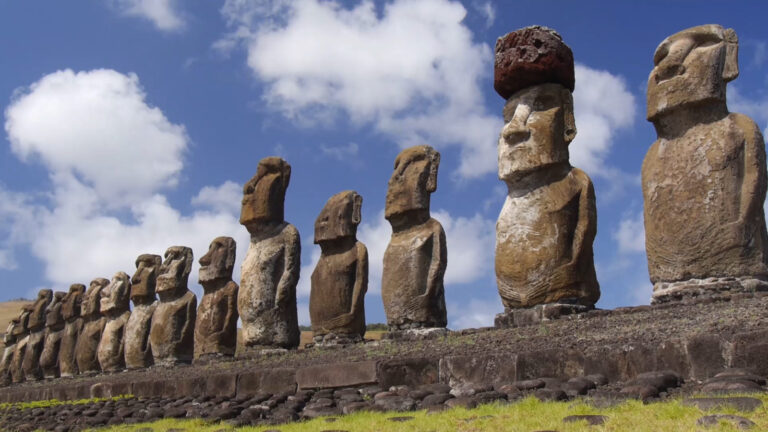 The monolithic moai statues on Easter Island have long been shrouded in mystery. Almost a thousand years since their creation, they still fascinate with unanswered questions the likes of other enigmatic structures such as the pyramids of Egypt and Stonehenge. These statues are the only remaining forms of art left by the original settlers of the island.

Easter Island is located in the Pacific Ocean 2200 miles west of Chile. Originally called Rapa Nui and settled around 800 CE by the native Polynesians. Dutch explorers who landed on the island on Easter Sunday in 1722 were responsible for the new name. An exhausted ecosystem caused by deforestation and a rat infestation and South American slave trade left few inhabitants even by the time the Europeans arrived.

Moai means “so that he can exist” and each figure is an embodiment of an important figure or ancestor. Ranging in height from 6-33ft, there are about 1000 scattered around the island. They were carved out of the volcanic ash stone or basalt in the quarries, then moved to the edges of the island. Multiple statues did not make it to their destination, either breaking or unable to be moved, they rest where they fell. They were placed to face inward with their backs towards the ocean so that they could watch over the land and people.

Recent work by New York’s Binghamton University suggests the moai’s placement was very deliberate, marking the location and flow of fresh drinking water, very scarce in the land. The red hats (called pukao, which can weight up to 13 tons),  that some of the maoi are suggested to be water-carrying vessels.

Radiocarbon dating shows the statues were carved from 1100-1500 CE. While the exact methods of carving and transporting the statues are not known, volcanic ash is relatively soft and can be carved with stone chisels known as toki and pumice and they were moved with either rock, ropes or logs. Because of the great weight of the statues, they were carved in a laying-down position and erected once they needed to be transported. Undecipherable petroglyphs decorate the backs of the figures.

Each moai is a massive figure with elongated, exaggerated face and features. They all look remarkably different because they were meant to exhibit characteristics of the person they depicted. Some people thought they were just heads, but their bodies were merely buried under ground. Over the years the statues fell, and it was only in modern times that they were erected again.

It is important to emphasize how sacred and powerful the moai were to the Rapa Nui people. The moai contained and embodied the deceased’s spirit (mana). The most important pieces were the eyes made of white shells and coral. Only one example survives. The eyes were placed at the very end of installation and seen as the key piece to bring the figure to life.

You might be also interested in stories about Babylonian Ishtar Gate and palaeolithic goddesses gifs, they are incredible!