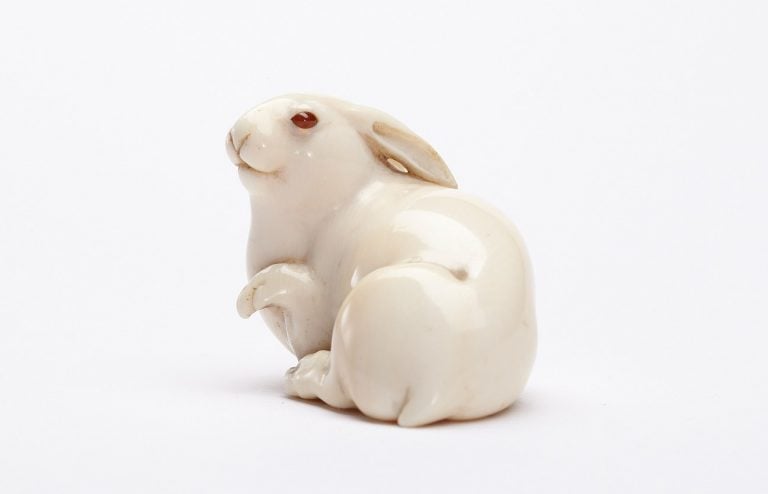 Originating in 17th-century Japan during the Edo Period, Netsuke (pronounced nets-keh) are toggles that attach pouches to the traditional robes, kimonos. Men’s kimonos had no pockets (the women’s version had large sleeves to carry and contain items), so out of necessity, small pouches were needed. Netsuke served as anchors in order to secure these pouches to their cloth belts on a cord.

Netsuke were initially practical, made from simple pieces of wood or a shell. Over time, they morphed into intricate and wonderfully carved and elaborate miniature sculptures. So small they can easily fit in your hand, most stand about 3-5 cm tall. You name it, there was a netsuke for it. The variety is staggering. They were carved into the shapes of people, animals, plants, and abstract and imaginative forms depicting anything from fairy tales to erotica and daily life. The materials were equally as varied. They used lots of wood, shells, hippopotamus teeth, ivory, horns, and clay. The colors are muted and are most often very earthy and natural tones such as white, cream, and brown.

Netsuke can be signed by the artist but frequently aren’t and primary sources are rare. We do know they were worn by the warrior class and were therefore a symbol of status. As their use and popularity grew, so did their artistry and craftsmanship. They became more and more detailed and intricate. The carvers were not only painters and sculptors but also mask and puppet makers. Netsuke are frequently talismans or good luck charms, to endow the wearer with good fortune and success in business. Cats such as these are abundant and signify luck.

Netsuke are so much fun to look at. Whimsical, endearing, and playful, this octopus as a one-man-band is a typical example of the fun side of these figurines. The artist and origins are unknown, as are so many, which leaves them open to forgery and fakes that flood the market. Once Japan opened up to trade with the rest of the world in 1854, their dress became more westernized and traditional garments, such as the kimono and the use of netsuke, were no longer necessary. Yet western visitors showed an interest in netsuke and consequently, thousands were churned out for souvenirs.

Museums around the world contain netsuke collections. Here are some fun examples from the Fitzwilliam Museum in Cambridge, UK.

The British Museum houses hundreds and it was so difficult to choose which ones to share. This little guy is a great example of the odd and folkloric styles that were so prevalent.

This monkey carrying an enormous mushroom, at a gallery in Austria, is a striking example of the humor often injected into the netsuke. It must have been so fun to wear them and the possibilities and styles are endless. They could be changed to reflect moods, seasons, holidays, and personal style. Similar to the charms we use today that dangle from our cellphones or bags, there were netsuke for every occasion and taste.

Elements of the macabre were big themes as well. This set from the Science Museum in London appears to be one skeleton giving another a shoulder massage.

In 2010, English ceramicist Edmund de Waal published The Hare with Amber Eyes, a memoir of his family’s famous collection of netsuke, which became an international sensation and brought netsuke into the limelight in the west. His family owned almost 300 netsuke which they purchased in the 1870s and passed down through several generations. Being Jewish, they were the target of Nazi raids in Vienna. They thought they had lost their netsuke collection to the Nazis, only to discover they had been hidden by the maid. De Waal sold part of the collection to benefit the Refugee Council and donated the rest of them to the Jewish Museum in Vienna.

Whereas the original netsuke carvers are often unknown, or there is little known about them, the craft was passed down through generations and is still a thriving art. Ryushi Komada is a third generation netsuke carver. Born in 1934, he learned from his father and began specializing in netsuke at the age of 15. He uses over 700 tools in his work to carve these delicate pieces, often taking two months to finish one. Each detail and stroke is so careful and deliberate. Komada and his daughter work to share this craft around the world.

Women carvers are also keeping the craft alive. Asuka Kajiura left a broadcasting career to learn the art from Tadamine Nakagawa. She shares her work through conferences, TED Talks and her Instagram.

Even pop culture is taking notice. A 2019 episode of Bob’s Burgers titled “The Helen Hunt” featured the search for a missing double snail netsuke.

Making the transition from the elite Edo class to complexly carved collectors’ items to modern cartoon sitcoms, netsuke are charming and educating pieces. They continue to inspire, intrigue, and delight, while also evolving along with the times.