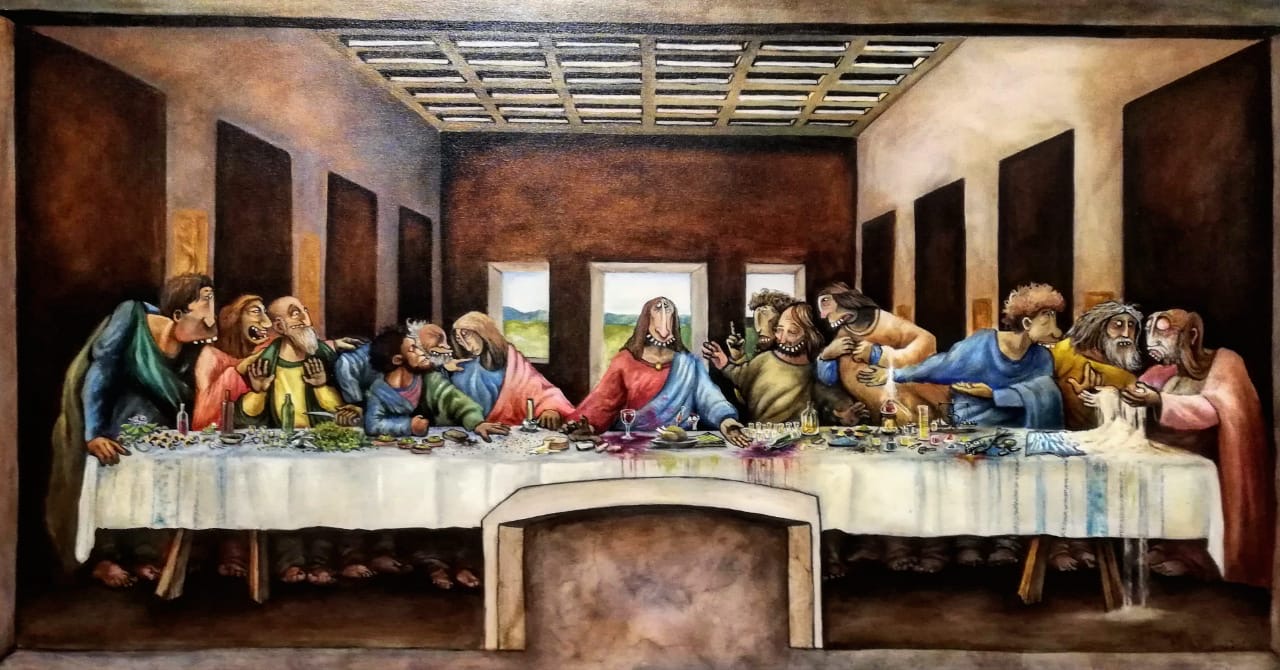 This November, a very different exhibition will happen at Tinta Naranja Urban Gallery in Mexico City. Eleven artworks by Michael Lombard will take up the walls. The collection is called Parodic Heresia. That is, classic art masterpieces distorted in parody versions. Huge teeth, enlarged body parts, silly facial expressions are the basic characteristics of these controversial parodies. But why did the artist make them this way? What is he trying to say? One thing is certain, one cannot view these artworks indifferently. Whether they create humorous and fun reactions or feelings of anger and disgust, they speak. So, in order to understand the collection, one has first to get to know Michael Lombard.

The History of the Collection

Michael Lombard comes from a family that goes back to three generations of artists. His great grandfather was George Minne and his grandmother was Alma Balet. As a result he grew up in a very artistic environment. Therefore, it is not surprising that he chose this career path, but it didn’t come easily. As a young artist, Lombard strove to gain recognition from the official art world. After being rejected several times, he created the first work of what would later become a series, Mona Lisa, in 1995. The painting was his “revenge” on the art world that only appreciated the classics and didn’t care about young artists.

The painting stayed in a corner of his studio for almost ten years. Later, in 2004, a friend of his discovered it and exhibited it in a café. The painting was a huge success. So, Lombard continued on a new path, where he changed the traditional reality of classic masterpieces. Ever since, and especially over the last year, he has been working on the collection.

What is the meaning of Parodic Heresia? First of all, Lombard desires to shock the viewer. Everybody knows these classic artworks, therefore it creates a strange feeling when they appear in such a different manner. Besides, as the artist states, it brings real pleasure changing the traditional reality of these paintings.

Moreover, they are a bridge between the past and today. They are contemporary adaptations that may even appeal to younger generations, urging them to discover and rediscover the classics. They are also a way to push ourselves. We need to evolve, to see things differently. These works might be shocking to some, but they push reality to the extreme. They are a symbol of renewing our old beliefs by paying homage to them.

Michael Lombard’s works raise a lot of criticism. Some see them from a humorous point of view, even thinking of them as potential memes. However, there are others that feel offended, for example by the enlarged breasts. As the artist explains, the point is to dethrone, to make something divine, such as the Liberty, more human. His way of doing this is through distortion and parody. The artworks don’t intend to offend anyone, rather to make them react. There is nothing worse for an artist than indifference. When someone reacts, that creates a question. That is evolution, awakening.

How do you feel about Michael Lombard’s artworks in this exhibition? Do you like them? Do they have something to tell you? Please let us know in the comment section below.

Michael Lombard‘s exhibition at Tinta Naranja will last from November 2020 to January 2021.

In the meantime, here are some suggestions about similar art:

Errika has a master’s degree in Modern and Contemporary History and dreams of becoming a curator. She writes articles about modern and contemporary art, fashion, and cinema. In her free time, she sculpts and paints miniatures and reads books.