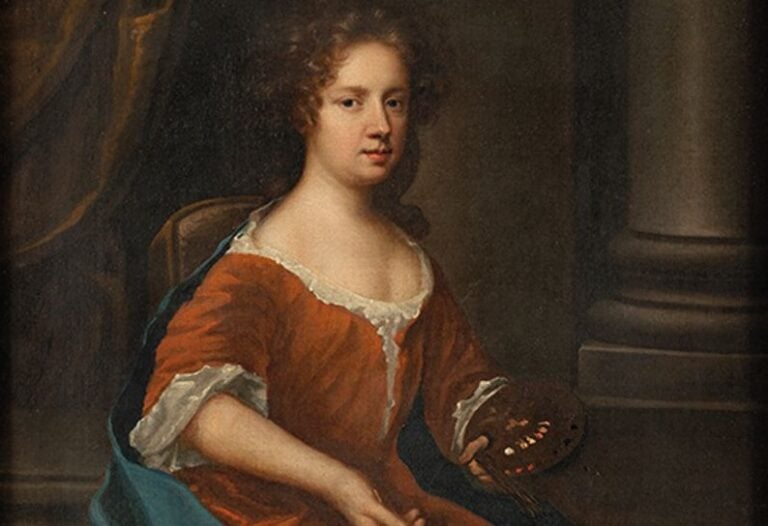 Mary Beale was a Baroque painter from the 17th century. Her talent led her to become the first professional British female artist. Luckily, she enjoyed the support of her family and friends in pursuing an artistic career. In a time of strict gender roles, Mary managed to become the breadwinner of her family, while also being a loving mother and wife. Thanks to her husband Charles’ notebooks there are detailed accounts of her work. In her best years, she received dozens of commissions from distinguished members of the English society, making her incredibly successful.

Mary Beale (1633-1699) was born in the puritan community of Barrow, Suffolk, England. She was the first child of John and Dorothy Cradock. Unfortunately, her mother died in childbirth when she was only 10 years old. Meanwhile, her father worked as a rector. However, he was also an amateur painter. Most probably, his influence as well as those from his social circle led Beale on an artistic path. Her youth and career were enclosed by the Civil War (1642-1651) and the scientific revolution. Although she never received any formal instruction, she enjoyed the rare privilege of visiting Peter Lely‘s (1618-1680) studio and copying his works. He was the court painter of Charles II.

The influence of his style in Beale’s own is evident in the use of elaborate drapes, compositions, and poses. So much so that once his style lost popularity after his death, her commissions decreased too. However, that would not happen until the 1680s. Moreover, they remained friends for many years. In fact, he made a portrait of her son. Her works focus on the face of the sitter, their expression, and their personality, sometimes without putting much detail in the clothes. First, she painted her family and friends. As time went by, members of the aristocracy took interest in her talent.

An Unconventional and Loving Marriage

On 8 March 1652, Mary Cradock married Charles Beale, a cloth merchant, and amateur painter. The Beale marriage was quite unusual. Not only was it a truly loving union, but a surprisingly egalitarian one. Actually, in her best years as a professional portraitist, the traditional roles in the marriage reversed. While she was the primary breadwinner of the family, he became her assistant. In reality, this sole fact may be the source of embarrassment to many men, even in our days. Yet, there is no indication that such sentiment was within him. On the contrary, his detailed records of Beale’s work prove the immense pride and respect he felt towards his “Dearest Heart”, as he called her.

[…] my Sonn Charles to Mr fflatmans in order to his begining to learn to Limne of him. The same time I sent my Sonn Barth:’s picture upon a yard Cloth done extreamly well by my Dearest Heart, for Charles to make his first Essay in Color in water upon […].

A Love for Knowledge

Indeed, many of us could take notes in Charles Beale’s records. His exhaustive notebooks of the family’s income and expenses are truly fantastic. He put everything on paper that relate to his wife’s work. For example, there are organized lists of the sitters with the dates of each portrait. Furthermore, he wrote down the acquisition of materials, their providers, and costs. Additionally, he detailed the techniques she used. Moreover, he described the results of his experiments with pigments and other materials, as well as their debts and charity donations. Sadly, most of his notebooks are gone. Yet, those that survive provide us with unique insights into the finances of the family and proof of Mary Beale’s success as an artist.

Mary Beale shared with her husband an interest in writing and in recording methods and techniques. In 1663, she wrote Observations, the first text from a female artist regarding painting techniques. Moreover, they worked together in various experiments. She would try various kinds of supports or techniques and he would record them.

This unique marriage might be explained through Beale’s views on friendship. In a letter addressed to her friend Elizabeth Tillotson in 1666, the artist expressed her ideas on the subject. For her, friendship was the “nearest union”, and it came hand in hand with marriage. When she spoke about Eve, she mentioned:

For when God had at first created him [Adam], it is not fit said He, that Man should be alone, so then he gave him Eve, to be a meet help, and what can imply but that God gave her for a friend as well as for a wife. A wife and a friend but not a slave; for we find her not in the beginning made subject to Adam, but always of equal dignity & honor with him, till by her own great modality, sinning herself and then seducing her husband, she lost her share in that rule which before they had in common, and as a just reward of her transgression had both her desires and person subjected to him.

Women Who Changed the World: Their Lives, Challenges, and Accomplishments through History [4 volumes], edited by Candice Goucher, 2022.

Interestingly, she still attributes Eve the fault for the original sin, seducing Adam, and the expulsion from paradise. Furthermore, she follows the idea that Eve’s actions impact women. And yet, she continues,

A curse which she not only procured to herself, but entailed upon all her female posterity, except a small number who by friendships interposition have restored this marriage bond to its first institution.

Women Who Changed the World: Their Lives, Challenges, and Accomplishments through History [4 volumes], edited by Candice Goucher, 2022.

A Woman, an Artist, and a Mother

Beale did a few self-portraits throughout her career, but this one is quite special. It tells the audience everything about her. First off, she is wearing a luxurious dress which speaks about her successful career. Beale’s career reached its peak in the mid-1670s. The notebooks from her husband indicate 83 commissions in 1677. Furthermore, as it happens with many female artists, she is asserting her profession as a painter. Hanging next to her there is a palette, while she is holding a canvas. Indeed, her money comes from her art and it was enough to support her family of four.

However, there is another detail in the canvas. She added a couple of unfinished portraits of her sons. Tragically, Beale’s first son died shortly after birth in 1654. But a year later, Bartholomew Beale was born. And in 1660, her third son Charles came into the world. Once the boys grew up, they helped their mother in the studio and started learning painting. Only the youngest continued, specializing in miniature painting until his eyes weakened and he opted for larger pieces. Therefore, she proudly presents herself as a successful female artist, but also a mother (and wife).

The Legacy of Mary Beale

As it was stated, in the 1680s her commissions decreased. As a result, she started to welcome female students into her studio. A couple of the prominent ones were Keaty Trioche and Sarah Hoadly, née Curtis (c. 1676-1743). Moreover, she enjoyed recognition during her lifetime, something many other female artists did not have. Her name was included in Sir William Sanderson’s Graphice in 1658. The mention is brief and does not at all pretend to argue in favor of women’s artistic ambitions. Still, the fact that she was included speaks a lot about her talent. Even decades after her death, Charles Beale’s notebooks interested scholars. George Vertue transcribed and published a few of them. Sadly, her tomb was destroyed in WWII. It was located in St James’ Church in Piccadilly, London. Today, there is only a plaque.

Fortunately, the interest in Beale’s life and work has been growing in recent decades. Just last month, an exhibition about her ended in the Moyse’s Hall Museum titled Beale: Observations. Plus, academics like Helen Draper have studied her life extensively.

Certainly, Beale is an example of how a woman could thrive both in the domestic and professional arena, as long as they had a circle that supports them on both fronts.

“Mary Beale”, National Museum of Women in the Arts. Accessed on 15 January 2022.