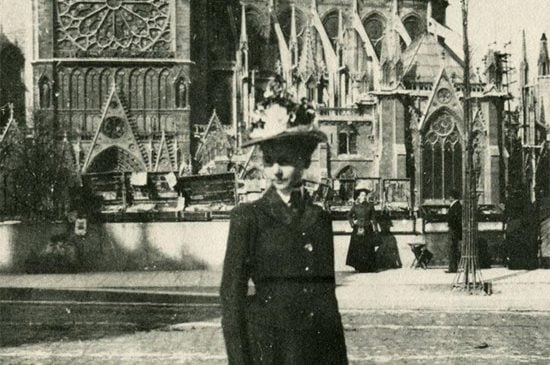 The Practical Side of Modernism – Aino Aalto

America’s first successful female architect, Julia Morgan ran her own architectural firm for almost half a century. Although best known as the designer of Hearst Castle, she also created hundreds of other buildings. This is her story.

San Francisco native Julia Morgan (1872-1957) chose architecture from her many talents and interests. Because the 19th-century American West did not yet have any architectural schools, Morgan studied engineering at the University of California, Berkeley. This training would serve her well throughout her career.

Julia Morgan moved to Paris after college to study at the famous École des Beaux-Arts. When she arrived in 1896, the École had only just begun to consider female applicants. Morgan, therefore, faced a tough battle. Admission to the École was highly competitive under the best of circumstances. However, she eventually became the first woman to ever attend the École’s architecture program. She graduated in 1902 with high marks.

After completing her European studies, Morgan moved back to California and then became the first licensed female architect in that state. After briefly working for another architect, Morgan established her own firm in 1904. By the time she retired in 1951, she had designed over 700 buildings – homes, academic buildings, gymnasiums, office buildings, YWCAs, community centers, and more.

Although trained in classically-inspired Beaux-Arts architecture, Julia Morgan worked in various styles according to each client’s specific needs and wants. She often used the Mediterranean and Mission Revivals, both of which fit well with California’s climate and history. Her buildings frequently employed local touches, such as California redwood and red-tiled roofs. However, Morgan also sometimes used Gothic Revival, English Tutor Revival, Italianate, and other styles.

Thanks to her engineering degree, Morgan specialized in the use of reinforced concrete, which was particularly appropriate in earthquake-prone California. She designed buildings from the inside out, because she prioritized interior spaces above facades. Although Morgan carried the principles of her Beaux-Arts architectural training throughout her career, she also had an Arts and Crafts sensibility.

She prized honesty in materials, as well as the harmony between a building and its surrounding environment. Despite this, she did not adhere to any artistic dogmas. She was a perfectionist who demanded the best from her many employees but treated them with remarkable loyalty and support. Morgan appreciated quality craftsmanship, so she hired the best woodcarvers, metalworkers, mural painters, etc. to work on her buildings. In general, her designs don’t abound in decoration – with a few critical exceptions. They always feel simple and dignified, but never sparse.

Julia Morgan was a creative problem solver who clearly enjoyed a challenge; however, it seems that innovation wasn’t important to her. She didn’t attempt to create a new architectural style, and she certainly wasn’t looking for personal fame and fortune. In fact, she disliked attention, did not give interviews, and refused to write about her work.

Because she referenced history rather than embracing modernism, her architecture fell out of favor by the end of her lifetime. Julia Morgan was quite forgotten during the second half of the 20th century but has been rediscovered more recently. In 2014, the American Institute of Architects posthumously awarded her its highest honor, the Gold Medal. She was the first woman to ever receive this honor. More recently, the restoration of her great Neptune Pool at Hearst Castle received widespread media attention.

She made a long-lasting contribution to the profession by demonstrating that a woman could not only break into a field dominated by men but also create a significant body of work that endures among the highest accomplishments of 20th-century design.

Julia Morgan is best known as the designer of Hearst Castle. She spent decades working on William Randolph Hearst’s estate in San Simeon, CA. Morgan was masterful in meeting all the engineering and design challenges associated with Hearst’s ever-changing desires. She also managed craftsmen, oversaw artwork installation, hired estate staff, and helped to establish Hearst Castle’s private zoo. Hearst was a difficult patron, but their correspondence suggests that he and Morgan got along well, with mutual respect.

There are 165 rooms in Hearst’s “ranch”, which includes a Main Building, three guest “cottages”, indoor and outdoor pools, a zoo, and other structures. The Main Building has the style of medieval Spanish buildings, with two church-like towers. It is made of reinforced concrete faced with stone and decorated with teak, iron, and painted tiles. The interior abounds with lush wood carvings, stonework, decorative painting, tapestries, and other medieval-inspired decoration. Hearst Castle also displays William Randolph Hearst’s art collection. Additionally, the ranch is famous for its two pools. The 345,000-gallon, outdoor Neptune Pool boasts an antique Greco-Roman temple front on one side. Meanwhile, the indoor Roman pool sparkles with vibrant blue-and-gold mosaics. Hearst Castle is now a state park, open to the public and offering tours.

Julia Morgan and the Hearsts

In addition to Hearst Castle, Julia Morgan built numerous other commercial and private structures for the Hearst family. She first met Phoebe Appleton Hearst (1842-1919), William Randolph Hearst’s mother, early in her career. She completed several successful projects for Phoebe, such as Alisomar, a rustic-but-elegant conference camp for the YWCA. Morgan eventually became the architect of choice for three generations of the Hearst family.

Wyntoon, a retreat in the mountains of northern California, was one of Morgan’s most memorable Hearst projects. The entire complex evokes a whimsical Bavarian fantasy through half-timbered cottages with wooden tracery, fairy tale frescoes, and names like Cinderella House and Fairy House. Unfortunately, Wyntoon is still owned by the Hearst Corporation and is not open to the public.

However, Julia Morgan was much more than just an architect to the Hearsts. In fact, grand, flamboyant buildings like Hearst Castle and Wyntoon do not accurately represent the rest of her work. Morgan started to develop her reputation when her Mills College bell tower survived the 1906 San Francisco earthquake. Soon afterwards, she was put in charge of restoring the earthquake-damaged Fairmont Hotel in San Francisco.

Throughout her career, Morgan designed many buildings for women’s organizations, such as YWCAs, social clubs, and colleges. She designed 28 YWCAs, containing both recreation facilities and living quarters for single women in the American west and Hawaii. Her Chinatown YWCA in San Francisco is particularly celebrated for its tasteful, Chinese-inspired details.

Morgan was particularly skilled in designing pools; by her count, she did at least 22 of them. Her indoor pool at the women’s club-turned-hotel the Berkeley City Club is probably her most photographed design after Hearst Castle. With its soaring arches overhead and cheerful splashes of color throughout, this light and the airy pool is quite an inviting setting for going for a swim. And, don’t forget this remarkable and pioneering female architect as you do so.