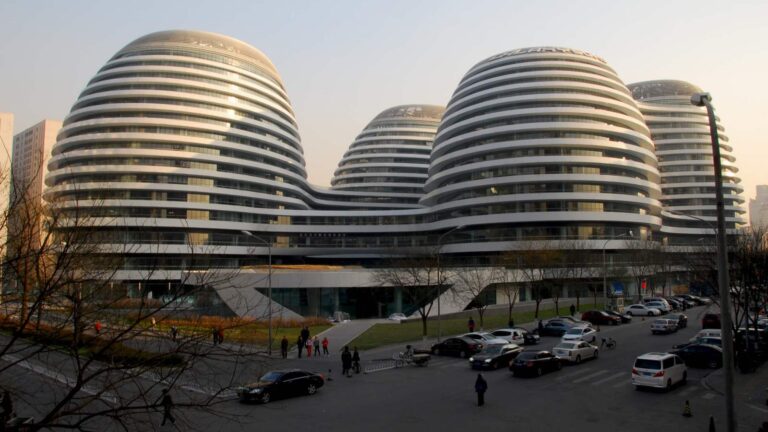 Readers of DailyArt Magazine know that society has made it difficult for women to become professional artists for much of western history. Well, if it has been hard for painters and sculptors, it has been even more difficult for female architects. However, that didn’t stop these eight talented and enterprising women from creating memorable buildings that are still admired today.

Elizabeth Wilbraham may have been the Europe’s first female architect, or she may not have been. She may even have taught Sir Christopher Wren, one of the most famous architects of all time, or she may not have. Some scholars have attributed up to 400 buildings – mainly houses – to her design.

In 17th-century England, it was almost impossible for a woman to become a professional architect. For this reason, Wilbraham would have been careful to cover her tracks, leaving behind no written records of her involvement. Unlike her colleagues, she would not have been able to supervise on the construction site – a very male domain. Therefore, she would have delegated the day-to-day oversight to men who later got the credit for her designs.

American scholar John Millar is Wilbraham’s biggest champion, although other scholars have not necessarily agreed with all his hypotheses about her career. One Wilbraham attribution that received widespread attention, however, is the great house at Weston Park in Staffordshire, England, shown above. Weston Park’s current owners sponsored a 2007 competition to figure out who designed the house, and Wilbraham came out as a top contender.

California-born Julia Morgan was the first woman from any country to study architecture at Paris’s celebrated École des Beaux-Arts. She used that education to become America’s first successful, independent female architect. She ran her own prolific firm, where she designed more than 700 buildings, mostly in the American West. Morgan is best known for Hearst Castle, newspaper magnate William Randolph Hearst’s mansion in San Marino, California.

If you want to learn more about Julia Morgan and her career, you’re in luck because we already have an entire article dedicated to her.

Despite a lack of formal training, Gray turned to architecture in the 1920s after befriending architecture critic Jean Badovici. Her first project was Villa E-1027 on the French Riviera. A sleek, compact home, with floor-to-ceiling windows looking out onto the water, the villa is warm and homey despite its minimalism. Her architecture, like her design, is sleek and functional, yet inviting. It also prioritized adaptability to personal needs – a revolutionary concept at the time. For example, she designed a special table that allowed her sister to eat breakfast in bed without spilling anything on herself. Additionally, Gray designed two homes for herself, both fully realized, as well as dozens of others that never left her sketchbook.

In the final decade of Gray’s life, British design company Aram took an interest in her work. She worked directly with Aram founder Zeev Aram to produce furniture based on some of her designs. Aram still holds the worldwide license to Gray’s furniture designs and continues to sell Eileen Gray-designed beds, lamps, screens, and more. More recently, E-1027 enjoyed a restoration after decades of neglect and is now open to the public.

Born in Italy and well connected to the Modernist scene there, Lina Bo Bardi and her art dealer husband moved to Brazil in the aftermath of World War II. It was in her adopted homeland that she designed her most famous project, the Museu de Arte de São Paulo (MASP). She designed both the building and the exhibition arrangement.

Breaking with conventional museum design, Bo Bardi created a single, wide-open interior space with glass walls. Artworks, even paintings, were displayed on concrete and glass stands, rather then hung on the walls. This stripped-down design was a particularly bold choice for a museum with a large collection of historical artworks. However, it allows for glass walls that create a light-filled interior without internal dividers to create artificial distinctions between art from different times and places. Just as paintings appear suspended in glass frames within the museum, the building itself appears suspended above the street outside. Bo Bardi’s fondness for glass-filled, elevated buildings also appears in her other projects such as her own home, Glass House, in a suburb of São Paulo.

Black female architect Norma Merrick Sklarek faced, and overcame, double discrimination. As the first African-American woman to become a licensed architect (in multiple states), she is sometimes known as the “Rosa Parks of Architecture”. In fact, she achieved too many firsts to name them all in this article.

After working for the City of New York in a job she found unsatisfying, Sklarek designed on both the east and west coasts. Her time with Gruen Associates in Los Angeles (1960-1980) proved particularly notable. She rose to the rank of director – the first female architect the firm promoted to that position. Later on, Sklarek, Margot Siegal, and Katherine Diamond made history when they started one of the first-ever partnerships owned exclusively by female architects. This subsequently made Skalrek the first black female architect to start and run her own architecture firm.

Sklarek’s significant projects include the U.S. Embassy in Tokyo, Terminal One at Los Angeles Airport, and the Mall of America in Minneapolis. Unfortunately, she was rarely credited on these projects as her male colleagues usually got all the attention. However, female architects remember her as a great trailblazer in their field.

Until her sudden death in 2016, Zaha Hadid was an undisputed superstar of contemporary architecture. The British-Iraqi architect was the first woman to received the Pritzker Prize, architecture’s highest honor. Hadid’s buildings look like they come from another world. Sleek and futuristic, though never harsh, her light-filled structures often have sinuous curves or shocking tilts we don’t expect to see in our built environment. They look like what we might expect to see in a science-fiction movie set on another planet in the next millennium, except they are real and they are here on earth today. In his essay in honor of her Pritzker, architect and critic Joseph Giovannini described Hadid’s contributions to architecture as “a new anti-gravitational visual physics.”

Hadid designed buildings all over the world, from Guangzhou to Marseille, Glasgow to Azerbaijan. She worked on everything from fire houses to opera houses, apartment buildings to Olympic aquatic centers, museums to ski jumps. She also designed furniture, jewelry, shoes, and even some pretty high-tech looking yachts. Her firm, Zaha Hadid Architects, continues on her vision today and her legacy has opened doors for female architects everywhere.

Maya Lin first achieved architectural renown when she won the competition to design the Vietnam Veterans Memorial in Washington D.C. She was still an undergraduate at Yale University at the time. In a statement on her website, Lin says that she “imagined cutting into the earth and polishing its open sides, like a geode” and that’s exactly what she did. You can view her original proposal here.

Lin’s subsequent career has included several more memorials or “memory works” as she calls them. These include the Civil Rights Memorial in Montgomery, Alabama, the Women’s Table at Yale, and the multi-media What Is Missing? memorial dedicated to climate change. She has also designed numerous public and private buildings such as the Museum for African Art and the Museum of the Chinese in America, both in New York City. Much of her design, which also includes artworks, addresses the environment in one way or another.

The German-born Annabelle Selldorf is head of a large architecture firm in New York City. DailyArt Magazine readers may be familiar with her name because she is the architect in charge of the Frick Collection’s ongoing renovation of its Fifth Avenue home. In fact, Selldorf is highly sought-after for projects just like that one; creative, yet respectful re-imaginings of historic structures, such as the Neue Gallery in Manhattan. Selldorf is a favorite architect of arts institutions, from museums like the Clark Art Institute and Museum of Contemporary Art San Diego to art dealers like David Zwirner and Gladstone Gallery. However, she has also designed everything from residential buildings to recycling centers to a rural school in Zimbabwe.