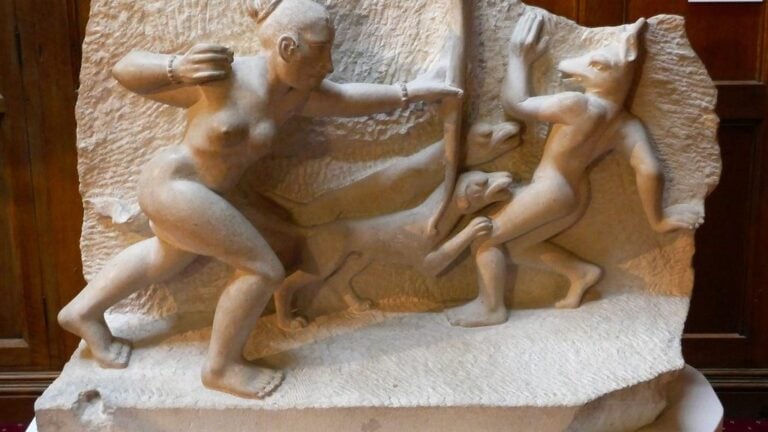 His studies included direct stone-carving and wood-carving. This emphasis on traditional methods of carving was in reaction to the assembly-line sculpting that was taking place in (for example) Rodin’s studio in Paris.

Paddison’s work includes busts, full-length sculptures, high–relief carvings and ranges from the clearly figurative to numerous near-abstract works, with some pieces fitting together almost like jigsaws.  Discernible influences are from medieval and Egyptian sculpture, cubism, and primitivism.

From London, Paddison returned to Wolverhampton College of Art to teach stone carving. One of his pupils was Glynn Williams who went on to have a distinguished career teaching and sculpting himself. Williams’ 2007 statue of Lloyd George now stands in Parliament Square, London.

Paddison himself did not enjoy the social and artistic acknowledgement his pupils received. In his 2001 Guardian obituary for Paddison, Vaughan Grylls commented: “his taciturn if charming personality, together with his then unfashionable work did not serve him well in the image-conscious 60s”. Be that as it may, Paddison was critically appreciated enough to exhibit widely alongside other giants of his day, including John Skeaping, Henry Moore, Barbara Hepworth, Frank Dobson and Glyn Williams.

In his career Paddison sculpted just three portraits from life: two were of his partner Susan and the other was his German friend Maja Boehlke, who lived in the UK during the 50s and 60s.

Also during this period in the 1960s Paddison experimented with fibreglass, as in his piece The Worker, commissioned by the Amalgamated Workers Union and now owned by Wolverhampton Art Gallery. This experimental piece was not an altogether successful divergence. The problem seemed to be the internal armature which proved to be unsuitable for supporting the fibreglass surface. As a result cracks appeared over most of the original joins and sections of fibreglass broke away and become lost over the years. Sadly the resulting fragility of the sculpture means it can no longer be safely displayed to the public.

Paddison also worked in bronze and Welsh slate, which he liked to engrave. Significant works were carved in Portland stone (a sedimentary rock) which meant that the occasional fossil would become apparent. Some might see this as a flaw, but not Paddison, who readily embraced the concept that art, like nature, is imperfect.

Carving in stone has its own inherent difficulties. Each blow of the chisel takes away something that can never be replaced. Working in stone you are in the realm of ever diminishing returns. For many sculptors, a way around this problem has been in preparation: first a model or maquette is made in clay, which reverses the carving process and adds rather than detracts. This preliminary model then acts as a guide for when the carving proper begins. This was Paddison’s method and is a process that is particularly important when attempting portraiture, where the artist is striving for reproduction of a likeness.

If his professional life was less successful than others the same might be said of his personal life. In his mid-50s, he moved to Llanidloes in Wales with his partner Susan. His studio was said to be a superb chapel conversion. However personal happiness was not to be within his grasp as little more than a decade later, Susan committed suicide, leaving Paddison’s life shattered. Despite such misfortunes, he continued to teach until 1994 and exhibited at galleries across the UK. His work can be found in many public and private collections.

One of his students, Roger Bradly spoke in glowing terms of Paddison: "'Those of us privileged to have been his students know that, like his remarkable work, his simple, direct and unpretentious teaching will not be forgotten”

Paddison died in 2001, and sadly many of his works remain obscure. There is no detailed catalogue of his works, and names seems contradictory, obscure, or are just ‘untitled’. I for one would like more answers about the work of this significant twentieth century English sculptor.

Mid Wales Arts Centre, in Caersws near Newtown is home to a permanent collection of Paddison’s work.

Since his retirement to Wales Ian has been studying art history and creative writing. He gives guided garden tours at Powis Castle in Welshpool and also assists at the Museum of Modern Art (MOMA) in Machynlleth.