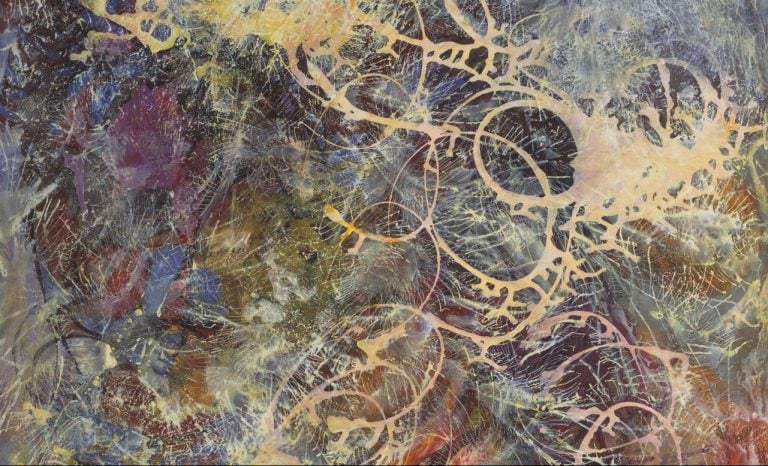 Although almost entirely erased from the canon of Abstract Expressionist art, Janet Sobel (born Jennie Olechovsky) is now slowly gaining recognition as one of the original creators of the “drip painting” technique that many critics have previously associated with Jackson Pollock.

Who Was Janet Sobel?

Born May 31, 1893, in Katerynoslav, Russian Empire (now Dnipro, Ukraine), Janet Sobel and her siblings moved to New York in 1908 after her father was killed in a violent Russian riot. At the age of 17, she met and married Max Sobel and began her life as a traditional housewife and mother in New York. What is most surprising perhaps, is that Sobel did not begin painting until the age of 45 (in the year 1937). When she became known as a suburban artist housewife she inspired early second-wave feminist conversations about the domestic roles of women.

With the rise of Abstract Expressionism in New York during this period, Sobel focused her attention primarily on abstract and non-figurative art. Her work began to gain recognition after her son recognized her artistic talent. He aided her in sharing her work with many of the émigré Surrealists, such as André Breton and Max Ernst.

Due to her role as a housewife, Sobel never had the money for private art lessons and thus was entirely self-taught as an artist. While this may hinder other artists, Sobel was able to invent her own artistic and painting processes. These separated her as unique from her fellow contemporary Abstract Expressionists.

She cited music as one of her inspirations, stating how it stimulated her feelings which she poured directly onto the canvas. In many of her early artworks, she employed an automatic technique when creating her art. This caused many to liken her to groups such as the Surrealists. She worked quickly with her sole focus on one idea that popped into her head, giving her the necessary inspiration.

According to her son, she would prepare a ground, which would invariably suggest or trigger some ‘idea’ for her, whose sudden conception was matched by an equally rapid execution. In her efforts to pin down her conception she would pour the paint, tip the canvas, and blow the wet lacquer.

As such, Sobel’s artistic technique became later known as “drip painting” when it was adopted by the notorious Jackson Pollock. Sobel’s artwork from 1945 entitled Milky Way is a prime example of the artist’s “drip technique”, as shown above. The artwork displays Sobel’s rapid execution of movements, as various colors of paint are splattered and dripped around the surface of the canvas. Thus creating a simultaneously chaotic and beautiful composition. Additionally, the luminescence of the shades employed presents the brightness of the Milky Way galaxy.

By comparison, Jackson Pollock created Blue Poles in 1952. We can see incredible similarities in both composition and technique to Sobel’s Milky Way. The way in which Pollock has taken a massive, unprimed, unstretched canvas and dripped enamel paint throughout its entirety is almost identical in technique to Sobel’s early non-figurative works. While Sobel’s Milky Way has a luminescent quality to it that becomes almost feminine in its glow, Pollock’s stark contrast of black and white drips amongst a background of primary colors presents an entirely different mood.

As previously mentioned, during Sobel’s career she was not at all recognized as an artist in her own right. First and foremost, she was considered simply to be a domestic housewife who took up painting as a hobby. This belief was upheld during her lifetime and perpetuated by leading art critics, such as the leading Abstract Expressionist critic Clement Greenberg. He described her work as purely “primitive” and that of a “domestic housewife,” while praising Jackson Pollock for these same techniques.

Although Greenberg did not consider Sobel to be a force in the art world at the time, the leading patron of the arts Peggy Guggenheim noticed Sobel’s work and decided to include it in her The Art of This Century gallery in 1945. Jackson Pollock, himself, visited this gallery and ultimately admitted that Sobel’s work “had made an impression on him”. Unfortunately for Sobel, she was often overshadowed by her male counterparts as the Abstract Expressionist movement was male-dominated. Consequently, the time has forgotten her as the true creator of the “drip painting” technique that Jackson Pollock has become so well-known for.