Into the Abyss: The Forgotten Pietro Canonica 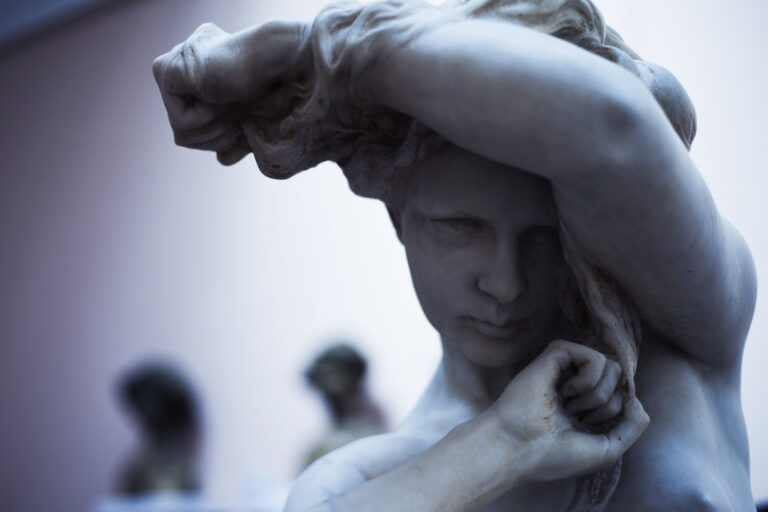 A prominent, famous and revered artist in his lifetime, Pietro Canonica has been relegated to the sidelines of Italian art history. Skilled and beautiful as it works were, his commissions from aristocracy and fascist governments caused him to be disregarded in the years following World War II. So unstudied is his life, that piecing together this short article took a surprising amount of digging and sifting through a variety of sources.

Born in Turin in 1869, he was truly a prodigy, beginning his apprenticeship at 10 years old. He studied art and eventually became a professor. While Art Nouveau and Art Deco were main movements during his years of production, he excelled at depictions of Naturalism and Realism unusual for the time. His early works were predominantly funerary – grave markers for noble and aristocratic families. Touching tributes exuding emotion, life and tenderness. Portraits and busts were also in huge demand for his clientele.

One of the only quotes available from Canonica gives a bit of insight into his work, “the aim of the artist is to study truth in its purest form, concentrating the greatest possible emotion on it.” His focus on Naturalism stems from his influence from Donatello and his desire to go back to the style of very early Italian masters. Despite a great deal of emotion in his work, there is an overall simplicity to the compositions.

In 1937 he was given permission to use, live in and renovate the Villa Borghese in Rome. Now a prestigious site, at the time, it was badly burned and had not been used for a number of years. In return for his restoration of the building, he was allowed to use it as his studio. He passed away in 1959 and since 1961 it has functioned as a museum to his work. His second wife gave his work to the city. Today the Museo Pietro Canonica welcomes visitors on a regular basis. The three works I will focus on are currently on exhibit at this museum.

The Abyss (L’Abisso) from 1909 is the work that initially grabbed my attention and made me want to learn more about him. Dimensions were not easy to find, but the photo gives a bit of a sense of the scale. It depicts Paolo and Francesca, the ill-fated lovers from Dante’s Inferno, trapped in their eternal wave of punishment. This is a prime example of the emotion in his work – the fierceness in their eyes, the desperation in which they cling to each other, her fingers digging into his back. The highly detailed fabric folds give a sense of Classicism, but overall, the Naturalism and Realism that was so important to him is very evident. It is incredibly moving and haunting.

Another of his allegorical pieces is Modesty (Pudore, 1920). A nude woman reclining in a very open and vulnerable pose in her attempt to shield herself. He handles female subjects very well – the curvature and expression not overdone. While still idealized, it is not in the usual way the female form was depicted during this time period.

Much like Michaelangelo who freed his sculpture from stone, The Ascension (L’Ascensione) gives this similar sense of a woman rising from the edges of a slab. It is fascinating to see how much of this block is uncarved, unused. This design was indicative of his style for funerary art. Plenty of his works contain this sadness and melancholy stemming from his early training in grave markers. But the great emotionality gives life and a spark to this sombre sentiment.

Later in his career, Pietro Canonica worked on monuments for controversial figures such as Tsar Alexander II of Russia, Ataturk, dictators of Egypt and of course Mussolini’s government. He contributed to several designs, but would often not have a say or input on the final finished product. Because of the lack of research into his life and work, it is not known how involved he was, what his political affiliations were or any of his motivations. About three books were written up through the 1960s, none afterwards, and apart from the Museo Canonica, no museum has done an exhibition.