To pout or not to pout… that is the question.  From smoulders to smiles, duck faces to dog ears, in the age of front-facing phone cameras there isn't a man or women alive who hasn't at least been tempted to shamelessly pose for a selfie in the middle of a busy street. However, Millennials are not the originators of the vanity pic. Portrait artists have been pulling their sexiest faces and committing it to paper for thousands of years.

Here are the top tips for taking the perfect selfie according to the portrait masters themselves. 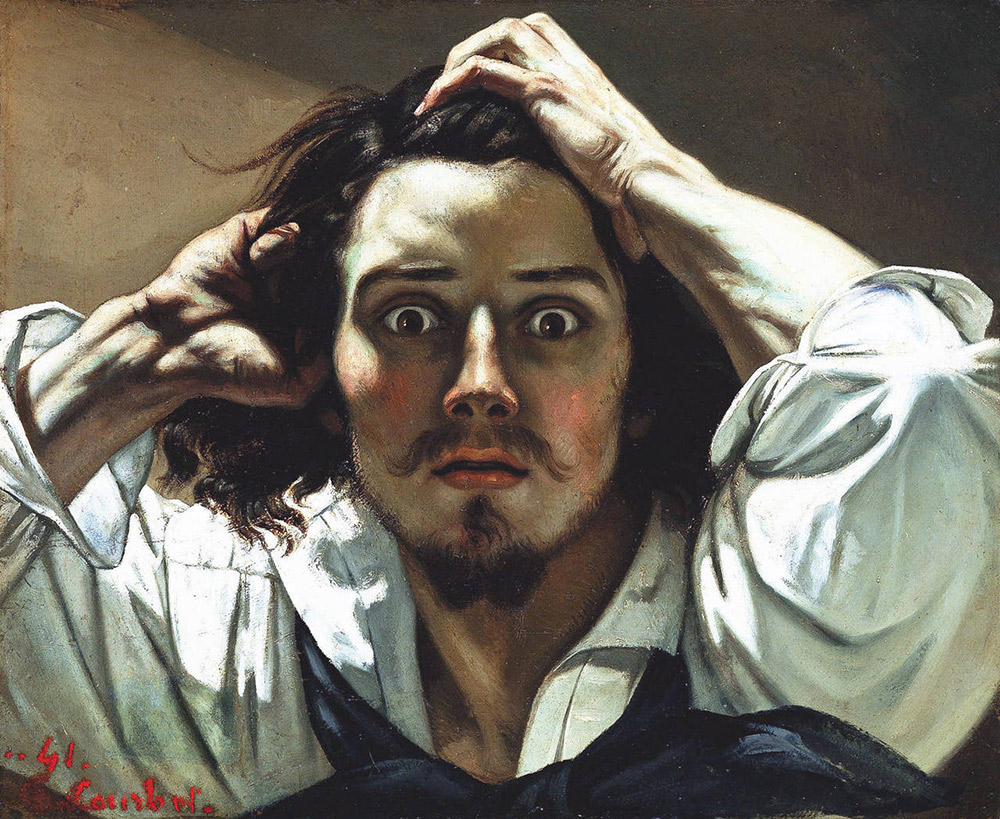 Gustave Courbet, Self-Portrait as the Desperate Man, 1845, Private Collection[/caption] Courbet certainly doesn't pull any punches in his raw portrayal of self-awareness and self-depreciation in his portrait entitled Le Désespéré (or Portrait of a Desperate Man). Painted towards the middle of the 19th century, the image depicts a younger Courbet, clutching at his black locks and gazing despairingly into the eyes of the viewer. The frame is claustrophobic and the art style pseudo-romantic.  Whether or not this painting is a direct representation of Courbet’s state of mind at the moment he put brush to canvas is unclear. Through various correspondence between himself and various acquaintances, some might say that he was amidst a temporary personal crisis. However, whether this inspired the intense melancholy behind the eyes of Le Désespéré is not entirely clear. Fictitious or not, the vulnerability in his pose is undoubtedly the driving force of this painting and demonstrates the versatility of human expression when trying to convey emotion to an audience. 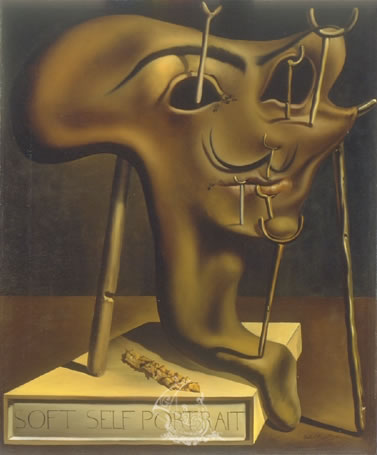 Salvador Dalí, Soft Self-Portrait with Grilled Bacon, 1941, Dalí Theatre-Museum Figueres, Spain[/caption] Soft Self-Portrait with Grilled Bacon embodies everything we love about our Instagram and Snapchat filters. Dali’s presentation of himself is far removed from reality; the whole image is fuelled with symbolism through his warped features and surreal expression. The face itself holds Dali’s defining features as the staple of his identity - the moustache and withdrawn jawline - but outside of that, he has utilised his ability to warp reality into something out of surreal fantasy. The blob-like mass gradually melting away from its once human form is held up with crutches. There are no eyes in its sockets and ants crawl over its skin. This could be picked apart and interpreted in a multitude of different way but the reality is there isn’t necessarily any definite answer as to what Dali intended this to ‘mean’. Put simply, what we have is a statement about the fragile nature of identity - how we allow ourselves to be perceived in comparison to who we actually are. Food for thought for the next time you apply a beautifying lens filter.

William Townsend: Find Your Best Side and Stick with It! 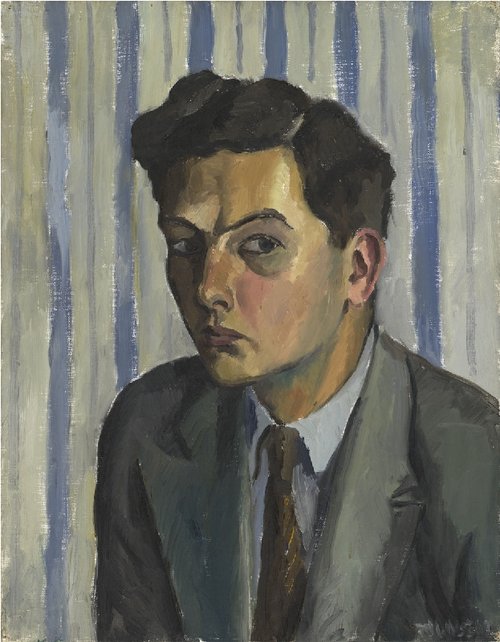 William Townsend, Self-Portrait, c. 1929. williamtownsend.art[/caption] More than 40 years separates Townsend's two portrayals of himself yet, despite the greying hair and somewhat drastic shift in style, the man himself holds his composure in the same photogenic manner. Most notably, he observes his viewer, seemingly to his left, with raised eyebrows and a look of reserved suspicion on his face. [caption id="attachment_19380" align="aligncenter" width="707"] 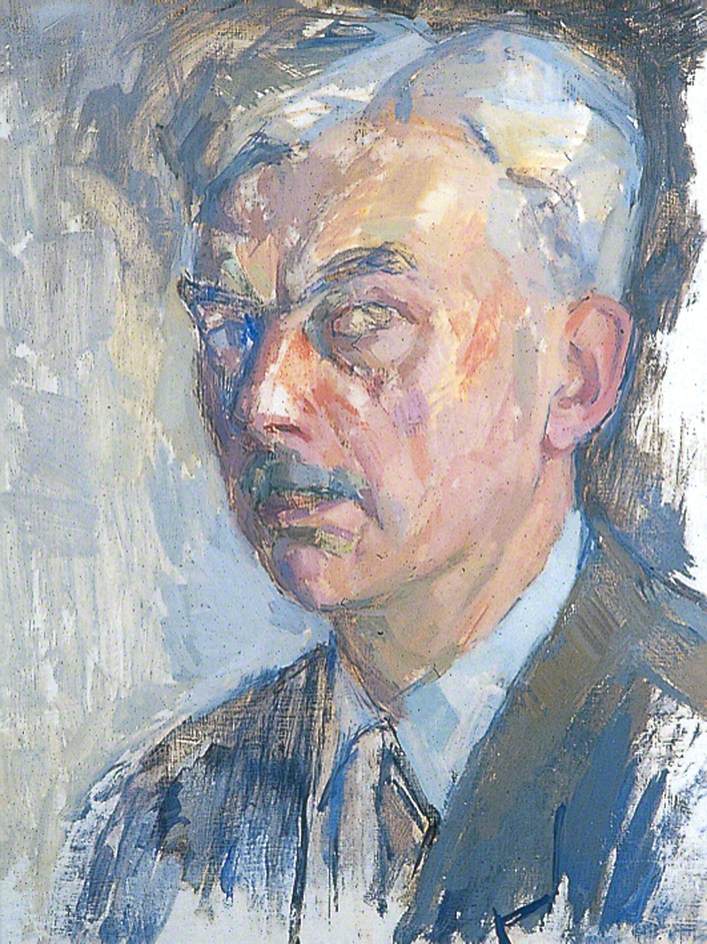 William Townsend, Self-Portrait, c. 1970, Canterbury City Council Museums and Galleries[/caption] Townsend perfected this look from a relatively young age. However, despite the multitude of similarities between these two images, there is also one significant difference - his presentation of self. The first of his self portraits presents an accurate, unobscured likeness of a young man. His colour palette is warm and gives off an air of youth and vitality. The subject looks up at us creating some vulnerability in his presence. Fast forward 40 years... the colour pallete turns cold, his style is raw and his brush strokes harsh. The subject now looks down at us from a far more mature perspective. The development in Townsend's composition demonstrates what experience can do to a man. It makes him wise, inquisitive and in some cases bitterly jaded. These two portraits stand testimony to this, but they also demonstrate another fundamental aspect of personal development... knowing your good side and using it to your advantage.

Art creates emotions and, generally, you either like a certain piece of art or you don’t. But despite that, what is valid for everything else is...

The Night Sky: 10 Nocturnal Paintings You Will Love

Few things in life are more moving than the night sky on a cloudless evening. Artists have been fascinated by it for so long! The night has inspired...