Enjoy The Heat Wave With The Great British Seaside 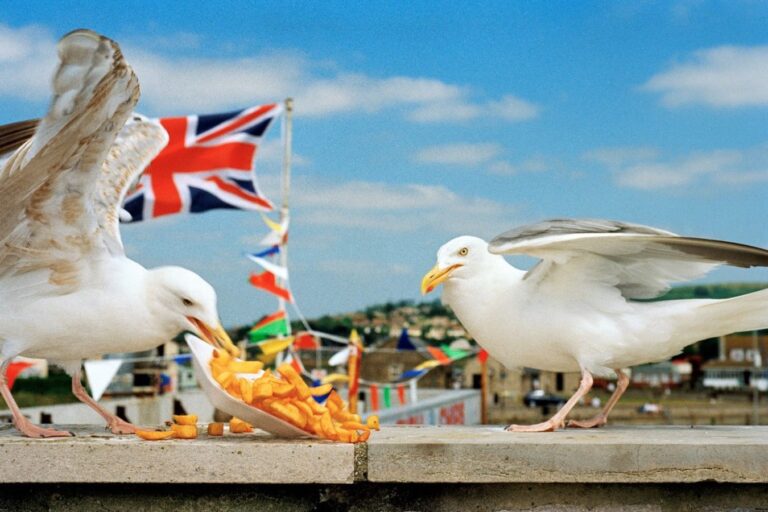 As the United Kingdom experiences one of its hottest summers in the recent years The Great British Seaside: Photography from the 1960s to the present exhibition at the National Maritime Museum offers a brief escape from the sun and heat, while keeping us in the summer mood. The exhibition showcases seaside photography by four photographers: Tony Ray-Jones, David Hurn, Martin Parr and Simon Roberts.

It is a celebration of the British beaches and its specific and often eccentric atmosphere. Each of the photographers has their own distinct style and approach to the subject, but together they give us a comprehensive view of what does it mean to go to the seaside in the United Kingdom. Just as the title is a bit tongue-in-cheek, the exhibition’s atmosphere is one of fun with a bit of good-natured mockery at all the little quirks and eccentricities involved in spending a day on a British beach.

Welcome to the seaside

To get us in the mood, before we enter the exhibition we get a chance to take our own seaside selfie, the area ready for us with deck chairs, all the beach equipment needed, lighting and a beach background, inviting us to be active participants, not only passive audience. The exhibition is located across five spacious rooms, settled around the ‘seaside cinema’ in the form of several beach huts, a structure typical to the British seaside. The rooms are sparingly lit, to focus our attention on the photographs and draw us in, benches as if moved directly from the pier or a promenade invite to spend more time in the space and create a relaxed mood as we stroll through the exhibition. Relax and fun are the order of the day, with people going back and forth through the rooms, commenting, showing each other the photographs that caught their eye and having a laugh. The focus here is to present the typically British seaside and how it differs in many aspects from other seasides of the world, while still retaining some of the universal features we associate with spending time on the beach. It is said that death is the great leveller, but those pictures show that the beach is another and a more cheerful one, there is no other space that is equally democratic, the idea of having fun on the beach cutting across social and financial status. [caption id="attachment_15035" align="aligncenter" width="959"] 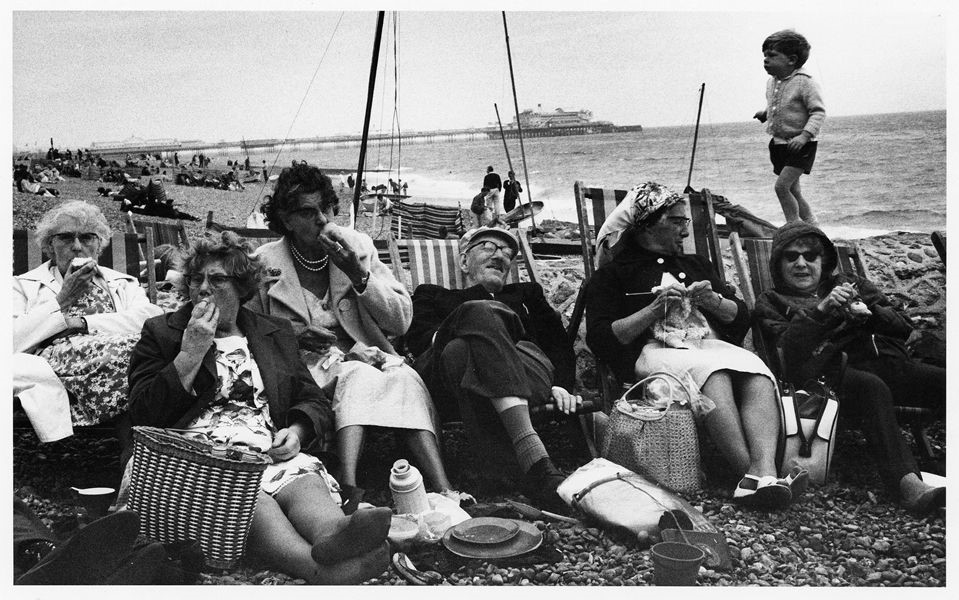 Things are about to get weird

The exhibition starts with the work of Tony Ray-Jones. He spent two years travelling along the British seaside in his camper van taking photographs to, in his own words, ‘show the sadness and the humour in a gentle madness that prevails in a people’. Ray-Jones manages to catch people in the funny and eccentric moments. In his pictures it is easy to see the generational differences, with older generation fully dressed and treating the day at the beach as a serious business and the younger ones being a lot more relaxed and at ease. The mood of those works is one of tender mockery and nostalgia, preserving things that must pass.

We’re all in it together

Next room contains the works of David Hurn, all also black and white, but showing his distinctly different style. He also hunts for the quirky situations and catching people unawares, but he puts them in the context of the broader background, forcing us to juxtapose the foreground with the background. His frames are wider letting in more air and making us aware that no one is alone on the beach, even if they feel like it. The wider frames also bring in a calmer mood, we are not alone, but we all let our hair down on the beach, so no one is judging. [caption id="attachment_15036" align="aligncenter" width="1000"] 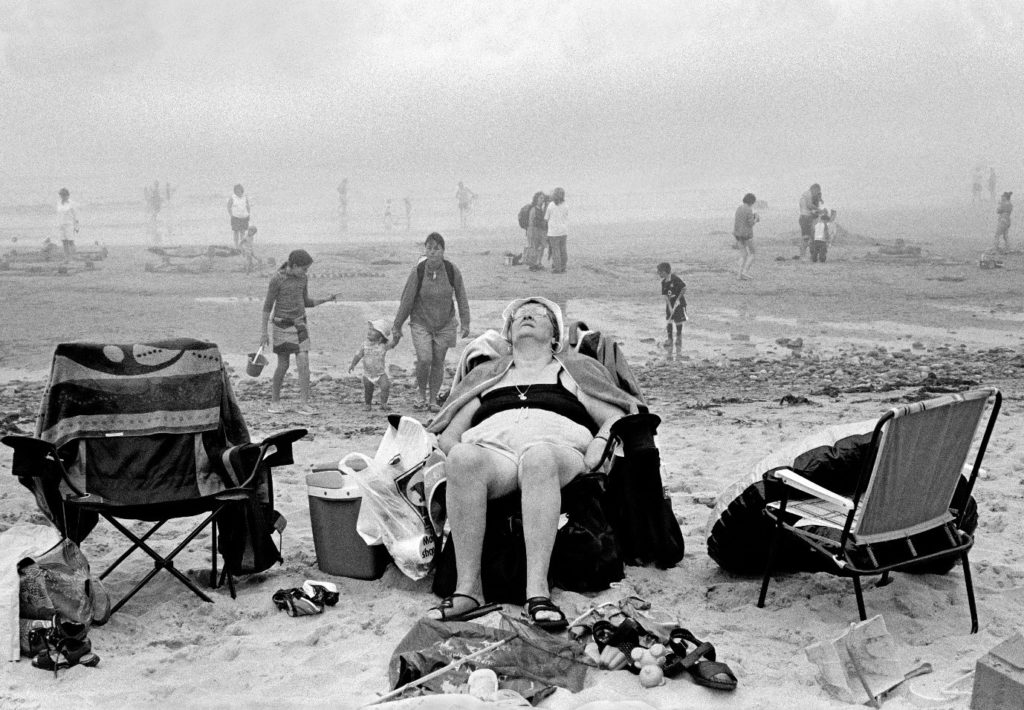 Hell is other people

The next two rooms are full of colour, as we move on to the works of the most famous of the photographers in the exhibition – Martin Parr. In 1986 he published The Last Resort, a documentary series showing working class enjoying their time in New Brighton seaside resort. The book caused a lot of uproar at the time of publishing, seen by many as a cruel joke at the expense of the working class. The mood here changes significantly, from innocent fun in Tony Ray-Jones’ photos, through calm, relaxed and democratic works of David Hurn we now get to the point where the seaside is overcrowded, loud, dirty, sticky and rough. It is the resort of your nightmares, one where there is no escape from your fellow beach-goers, where having fun and relaxing is indeed hard work. Parr’s photos are spot on, often harsh, but eye-catching through their vivid, saturated colour and very entertaining. Parr’s work is the largest part of the exhibition. It includes his newer photographs, with the 2017 Southend-on-Sea project commissioned by The National Maritime Museum in Greenwich, giving us a chance to compare his earlier and later work. The photographs from The Last Resort feel a lot more thought through and focused, they cut sharply, while in the newer work the focus seems to move to the more general task of documenting the seaside life, with no underlying idea. This was the only disappointing point in the otherwise exquisite exhibition, the selection of Parr’s work should be more discerning. [caption id="attachment_15037" align="aligncenter" width="1000"] 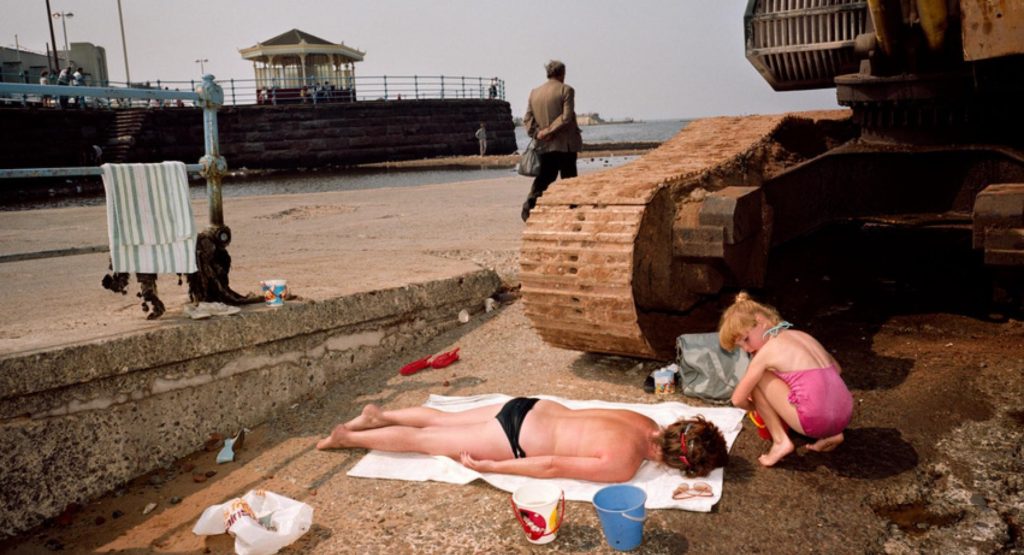 Breathe in, breathe out

In the last room, we are hit by a complete change of atmosphere, the works of Simon Roberts show us a different aspect of the seaside. One of his projects was to document the 58 remaining pleasure piers in the UK, but his perspective is different to the ones shown by Tony Ray-Jones, David Hurn and Martin Parr. He does not focus on people, instead as he himself said ‘I see the British seaside as a series of landscapes through which we can trace part of our national history.’ The frames are extremely broad, with long horizontal lines, people in them are tiny compared to the beach and sea around them. The mood is one of meditation, we almost feel the urge to take a deep breath in, especially after extremely busy and crowded photographs by Parr. Roberts reminds us why we go to the beach: space, contact with nature, a chance to experience something larger than us. People in his photographs are not individual, he perceives them as a group interacting with the landscape around them.

The exhibition’s aim is to present the British seaside in all its glory and eccentricity, and this is achieved. We not only get to see the pictures, thanks to the installation we get to experience the beach huts, the pier benches and the seaside cinema. The works shown take us through a range of scenarios and moods, some of them familiar to everyone, some typical only to the British. We are encouraged to freely roam the rooms, talk, laugh, sit down and relax, the overall mood is one of cheerful abandon. It is a chance to go to the beach while staying in London and if anyone craves a bit of contact with nature after leaving the exhibition, the Greenwich Park, one of London’s beach substitutes, is just around the corner to enjoy and tan. [caption id="attachment_15038" align="aligncenter" width="1000"] 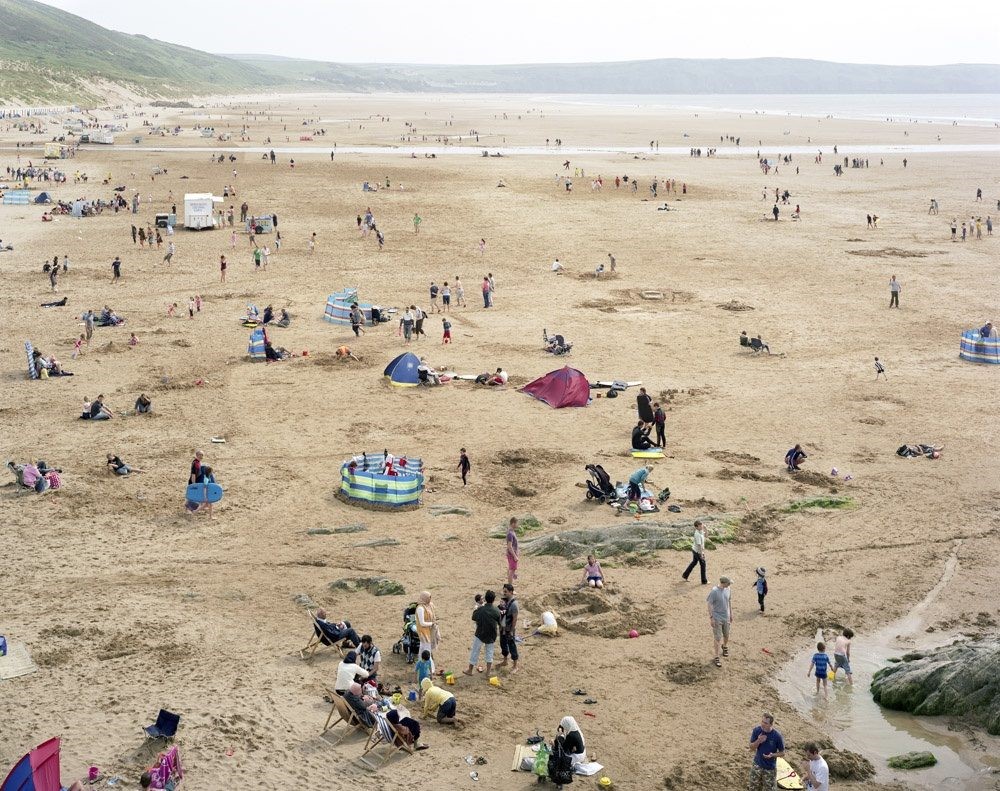 If you're in the mood for more beach-related reading, while you sit in your (hopefully air-conditioned) room, check those out: