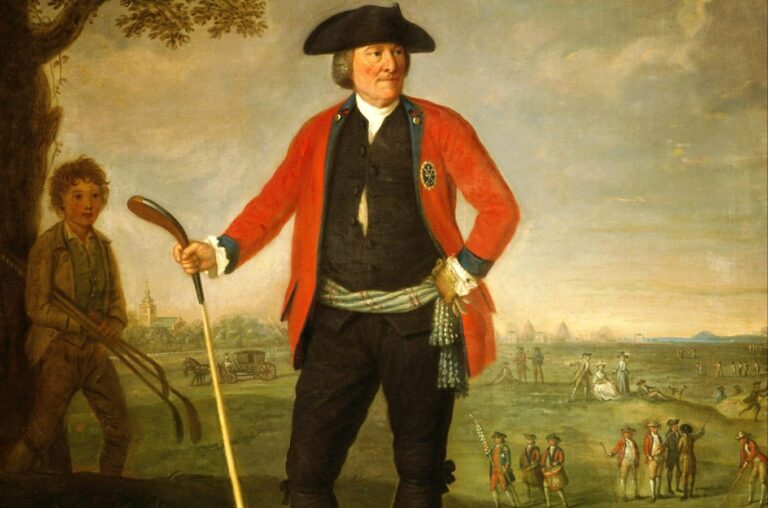 I used to live in St. Andrews, a small town in Scotland which is a legendary cradle of golf in the UK. Once, when I was strolling on a golf course, I wondered whether there were any golf paintings showing picturesque green Scottish hills and tiny white balls flying through the sky...

Surprise, surprise! The first golf work I found was not Scottish at all! I thought that golf was born in the UK. However, nowadays it is generally accepted that modern golf developed in the Netherlands in the Middle Ages. I had no idea that Rembrandt made etchings of golfers!

Yet another Dutchman's depiction of golf. This time a winter edition on ice! Why didn't we really associate golf with the Netherlands? It's probably because the game did not find international popularity until the late 19th century when it spread into the British Empire and the United States.

The painter David Allan and his subject, the surgeon William Inglis were keen members of the Honourable Company of Edinburgh Golfers, the oldest golf club in the world. Inglis and his caddy (the boy carrying golf clubs) stand on Leith Links, about two miles from the city center, where the club was then located. Behind Inglis, we can see the annual trophy parade. Here, a golf club with silver balls attached to it is presented to the city and carried across the Links.

This painting shows the climax of a match played on the Old Course at the Royal and Ancient Golf Club in St. Andrews (my town!). Sir David Baird and Sir Ralph Anstruther play against Major Hugh Lyon Playfair and John Campbell of Glen Saddel. This complex scene, which includes over fifty individual portraits, was painted with the help of photographs of some of the golfers.

Sir John Lavery RA was born in Belfast, Ireland, but he studied painting in Glasgow. Therefore he is associated with the Glasgow School. He is best known for portraits and wartime depictions. However, he often painted people being active and playing sports, as you can see in our Spot the ball post.

I have never played golf, but it's a great sport which makes you spend so much time outdoors. It's always good for you, especially when the sun is shining and the grass is green (which on the golf course is always the case!). Enjoy the game!