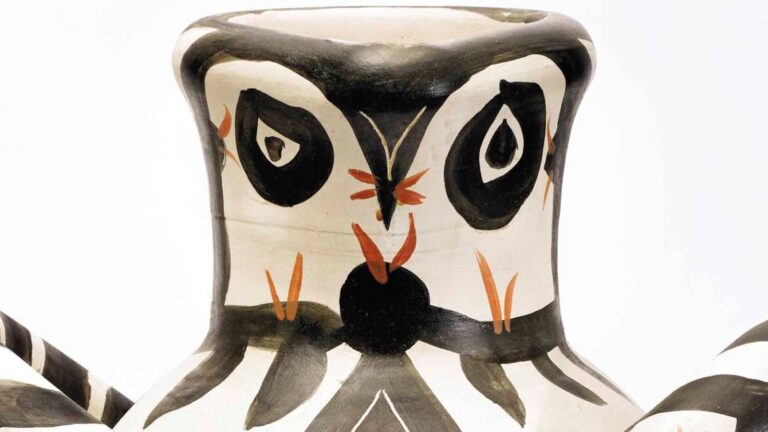 The Stedelijk Museum is a modern and contemporary art and design museum in Amsterdam, Netherlands. It includes works in many media from the late-19th century through the present and from all over the world. Here are a few highlights from the Stedelijk Museum collection. 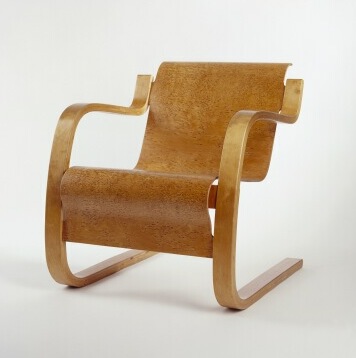 Alvar Aalto, (model 31/42), 1931-2, this example 1935-40, chair. Stedelijk Museum, Amsterdam. Photo ©Pictoright Amsterdam/Stedelijk Museum Amsterdam[/caption] Alvar Aalto (1898-1976) was a Finnish modernist architect and designer. Like quite a few other significant 20th-century architects, Aalto believed in the complete package. He didn't just design buildings; he also designed everything that would go inside those buildings. His work combined functionality and inspiration found in organic forms. The Stedelijk Museum collection also has loads of other decorative arts by Aalto. 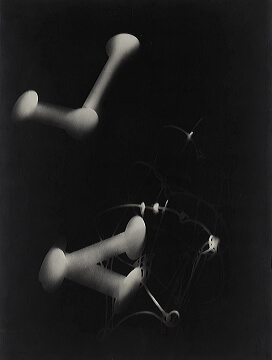 Laszlo Moholy-Hagy, ohne titel (untitled), c. 1925/1928-35, photograph/photogram. Stedelijk Museum, Amsterdam. Photo ©Pictoright, 2005[/caption] This work is a photograph of a photogram, which is not the same as a photograph of a photograph. A photogram is a photograph produced without a camera. The artist lays objects on photographic paper and then exposes it to light. Similar idea to a photograph, but different process and results. What objects would have to be placed on the paper to create this image, I wonder. Photograms aren't reproducible like photographs, because there's no negative. This particular piece is a photograph that the artist took of his photogram to reproduce it. László Moholy-Nagy (1895-1946) was a Hungarian-born artist who was an influential Modernist and once taught at the famous Bauhaus. 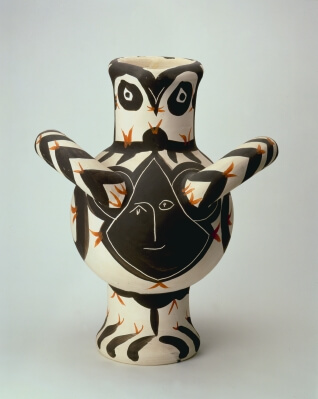 Pablo Picasso, Grote Vogel, Zwart Gezicht, 1951, earthenware. Stedelijk Museum, Amsterdam. ©Pictoright Amsterdam/Stedelijk Museum Amsterdam[/caption] In addition to painting, for which he is most famous, Picasso was also a great ceramicist. He began making ceramics in the 1940s after visiting a ceramics show in the south of France. Animals, like this owl, were a frequent theme in his bright and playful pottery work. In addition to this ceramic vessel, the Stedelijk Museum collection includes many two-dimensional works by Picasso, including paintings, prints, collages, and books. The most notable is probably his 1943 painting Têtes. 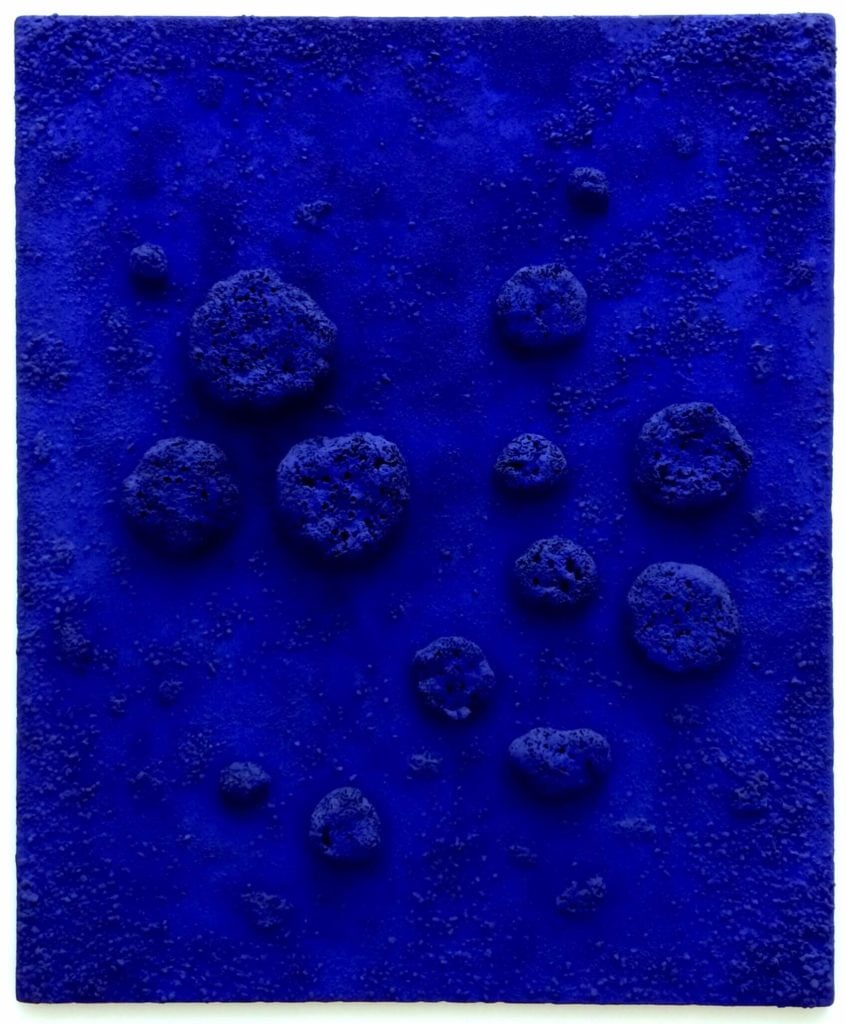 Yves Klein, L'Accord Bleu (Re. 10), 1960, mixed media painting. Stedelijk Museum, Amsterdam. ©Photo via Foundation Stedelijk Museum Amsterdam Collection/Jaredzimmerman (WMF) (CC BY-SA 3.0)[/caption] Yves Klein (1928-1962) loved this deep shade of blue so much that he registered it as "International Kleinel, Zwart Gezicht, 1951,Blue". A controversial French artist, Klein believed that abstract painting - the height of fashion in his lifetime - was largely a sham. To that end, he focused much of his work on monochrome color, which he believed could not be misinterpreted like abstract art could be. In this painting, Klein used sponges and pebbles to soak up pigment of International Klein Blue without need for a binding agent that would slightly dilute the color. In addition to his many works involving International Klein Blue, Klein also made prints, photographs, and performance pieces, all of which are represented in the Stedelijk Museum collection. 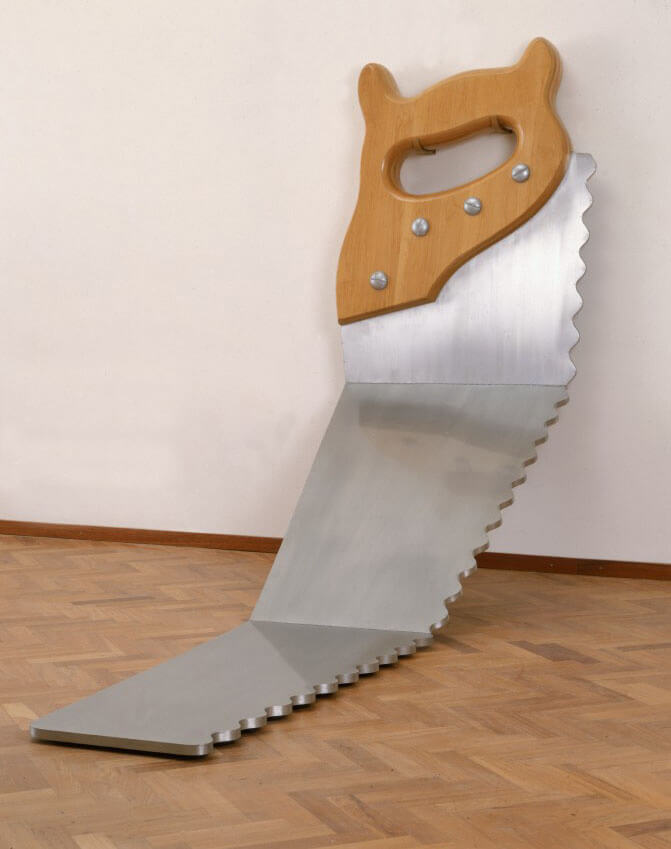 Claes Oldenburg, Saw (Hard Version II), 1971, aluminum, wood, paint. Stedelijk Museum, Amsterdam. Photo Claes Oldenburg and Coosje van Bruggen, 2005 via Stedelijk Museum website[/caption] Claes Oldenburg (b. 1929) is a Swedish-born American artist associated with the Pop Art movement. He likes to do some pretty unusual things. Here, for example, he made a massive saw bent in three pieces. It must be quite shocking to come across it in the galleries. The saw doesn't work, but there's no question about what it is. In late 1961 and early 1962, Oldenburg conducted an exhibition called "The Store", where he displayed many such nonfunctional sculptures that look like everyday objects. These objects were often made of soft materials very far from what the real thing is made of. He priced them and sold them from his store. Oldenburg was the first Pop artist to expand the movement to three-dimensional works. The Stedelijk Museum collection also includes Oldenburg prints and books.