Behind the Canvas: Claire Tabouret 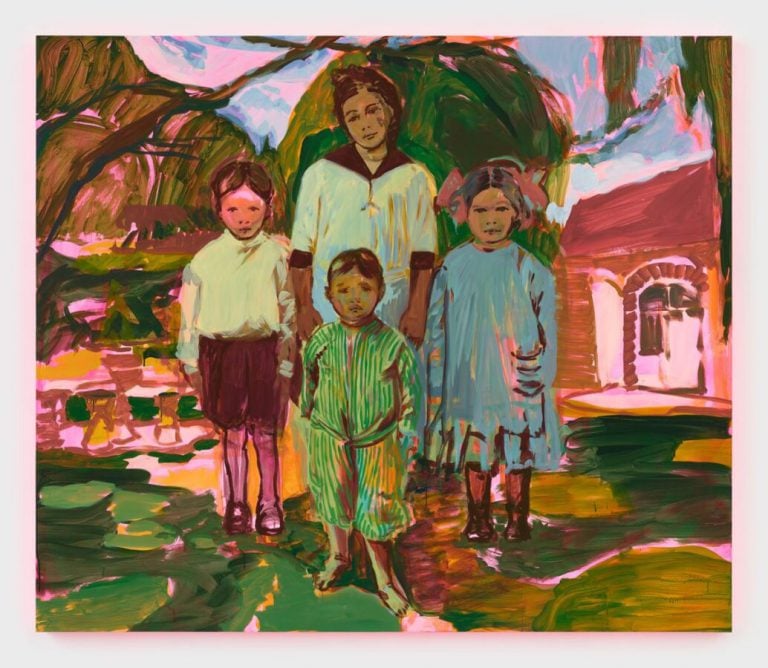 Claire Tabouret, The Siblings, 2020. Acrylic on canvas, 72 x 84 x 2 in. Photo: Marten Elder. Courtesy of the artist and Perrotin Gallery.

In the second edition of Behind the Canvas, we catch up with Claire Tabouret on the inspirations, stylistic influences and evolutions of her latest series of work: Siblings. The series debuted at Perrotin’s Seoul space.

Claire Tabouret is a French artist who is inspired by humans and their complex relationships. She is most widely recognized for her vivid, figurative paintings but her practice further includes drawing and sculpture. In her distinctive works, she has previously captured groups, couples and individuals. Recently, she changed her focus to the unique bond between siblings for an intimate show at Perrotin.

Since starting the series of portraits in 2019, it is hard to believe how much the world has changed: closeness became distance, loved ones greatly missed and intimacy a rarity. As Siblings, which inherently explores themes of community and family, comes to a close, we were fortunate to hear Tabouret’s thoughts on the series and its changing context.

“I haven’t seen the subject of my paintings in a while . . . due to social distancing. So the act of painting them became more nostalgic.”

When put into today’s context, the series only seems strengthened in sentiment, as the value of connection becomes more prevalent. However, the show explores individuality as much as what is shared. In her work, Tabouret has often questioned what it is that reveals singularity, even in group settings. With shared upbringings, surroundings, and of course DNA, sibling relationships provide an interesting vehicle to explore such tonality.

Tabouret has experimented with portraiture throughout her career, depicting people as means to explore her own interiority. Although Siblings continues within the form, the series sees the artist shift focus away from herself and towards other people. In a first for Tabouret, she takes photographs of real siblings as a starting point for the works. Placing tangible subjects in a mystical world, she frees her sitters from the photograph by translating them to fluid, gestural paintings. Tabouret also uses found images, such as a childhood photograph of her brother. The experience of painting him was sentimental for her, as she realized that she had always been trying to depict him in her work.

“[There is] a familiar resemblance in all the children in my group portraits. They all have an individuality as well as they share common features. I realized that they all looked a bit like my brother. So it was intimidating and very special to finally make a portrait of him.”

As well as found photographs from home, Tabouret also came across materials in unexpected places. When in a thrift shop, a particular photograph caught her attention. Four siblings stand in formation, an enigmatic and somewhat somber sight; intrigued by these Victorian children, she soon welcomed them to her mystical world.

“I was struck by this picture when I first saw it. I think what moved me was to feel the strong connection between the siblings, they are standing close to each other, protecting each other. The younger one is front and center and he looks like he is the captain of the crew.”

Tabuoret’s depiction channels elements of Edvard Munch‘s group portraiture, inspired by his ability to project his inner-feelings onto his subjects. Whilst re-contextualizing the children, their narrative remains a mystery that enshrouds the work; this titular piece exemplifies Tabouret’s interest in dialogue, as the viewer encounters the painting whilst trying to fill in the gaps.

Amongst her photographs of today’s siblings, as well as a childhood image of her own brother, the Victorians add a new layer to Tabouret’s many environments. In Tabouret’s world, lifetimes and centuries overarch as freely as her brush strokes, bonded by mutual intrigue and interrogation. Although each work begins from the vantage point of the last, the characters are not bonded by an inter-connecting narrative.

“[The works] . . . definitely stand alone. But the fact that they are reunited in this show adds a meaning to them . . . You can see them on their own, but you can also see them in this repetitive theme from one painting to another, all picturing siblings, and start questioning this special bond.”

The Layers of Self

Whilst some fixed objects aid in the characterization of her subjects, such as clothes or props, a lot of her depictions are transient. Relishing in what is ever-changing, light and color are key methods of capturing varying identities. Tabouret credits Monet’s Water Lilies as inspiration for her technique, as she was fascinated by his ability to depict movement.

“[Water Lilies] was my first encounter with painting and left a strong imprint in me . . . I think painting is a wonderful medium to represent a moving surface, a surface like water and a surface like a human face.”

When creating a portrait, Tabouret first coats the canvas in a bright, fluorescent paint which underpins the work. Although she paints over the initial coat with various other layers, she allows touches of the vivid color to peek through, often in the eyes of her subject. As different layers of color work with and against each other, we catch changing glimpses of Tabouret’s evolving people.

The beauty of Tabouret’s work lies in what is momentary, whether that be the passing light glowing through her subjects, their childhood innocence, or even the changing state of the world we view them from. Strong in color yet subtle in command, her series pulls us into a world where children across centuries are bonded by a common thread: Siblings.

Read the previous articles from the “Behind the Canvas” series: