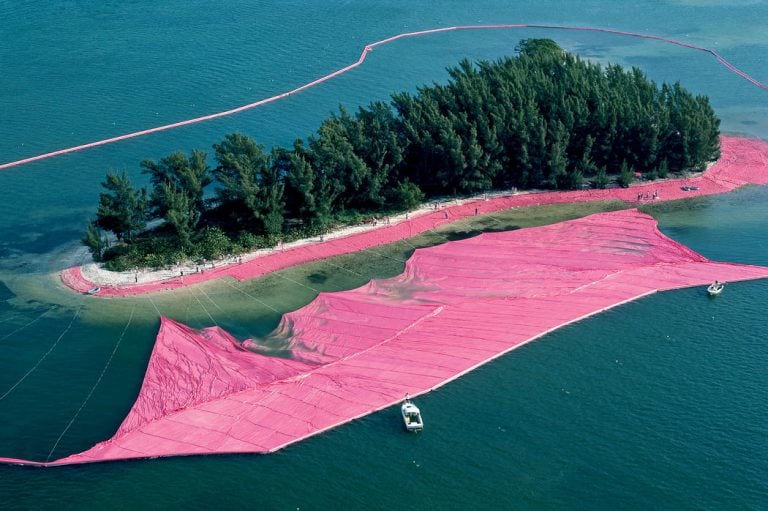 Christo, I hope you will be wrapping up heavens. Below we’re sharing a survey of Christo’s works to remember how many groundbreaking pieces he made. It’s our goodbye to Christo.

Born Christo Vladimirov Javacheff to a Bulgarian industrialist family, Christo began his art education at the National Academy of Art, Sofia, Bulgaria. However, as the situation in the Eastern bloc worsened, in 1956 Christo decided to escape to a better world. Through Prague, Vienna, and Geneva, Christo arrived in Paris where he earned petty money by painting portraits. His official debut (1961) took place in Paris: Christo with his life partner Jeanne-Claude blocked rue Visconti with a wall of oil barrels as a symbolic Iron Curtain.

Christo met the love of his life in October 1958 in Paris when he came to a house to paint a portrait of Précilda Denat de Guillebon who introduced him to her family. Although at first he was attracted more to Jeanne-Claude’s half-sister Joyce, soon Jeanne-Claude’s intelligence and wit attracted the young artist. They later found out that they were born on the same day! It meant destiny. Soon they started dating even though Jeanne-Claude was engaged to another man at the time. She even married him while carrying Christo’s child but, not surprisingly, her marriage didn’t last long. She separated with her husband and joined Christo to begin their life-long journey of making the world their canvas.

Jeanne-Claude recalled that one of the first gifts she had received from Christo was a tightly wrapped book which Christo didn’t permit her to unwrap. “That’s the real gift”, he said. Wrapping has become their trademark. Their first wrapping work on a large scale, Wrapped Coast, One Million Square Feet, was completed in 1969. With the help of professional climbers over two kilometres of Sydney’s coast was covered in 93,000 square meters of anti-erosion cloth, contained by one never-ending cord.

Other wrappings followed: Fontana di Piazza del Mercato and the Fortilizio dei Mulini in Spoleto, in 1970 Milan’s monument to Vittorio Emanuele in Piazza Duomo and Leonardo da Vinci in front of the Scala, later in 1995, the historic event of wrapping Berlin’s Reichstag. With time, working together became their life vocation. Jeanne-Claude and Christo even traveled separately so that in the case of an accident, one of the two would continue their mission.

Alongside their wrapping projects, Christo and Jeanne-Claude created projects embedded in a specific environment. Christo distinguished the duration of his projects into the ‘software’ and ‘hardware’ periods. ‘Software’ was the time spent planning, making preparatory drawings, and often conducting public hearings to obtain the permission of the local people to construct something in their area. The ‘hardware’ period was the phase of actually building of the piece.

The first big land art project was installed on August 10, 1972, in Rifle, Colorado, between Grand Junction and Glenwood Springs in the Grand Hogback Mountain Range. The 200,200 square feet (18,600 square meters) of woven nylon fabric orange curtain was attached to its moorings at Rifle Gap, 7 miles (11.3 km) north of Rifle, on Highway 325. Twenty-eight hours later, strong wind forced the artists to deconstruct the work.

Christo and Jeanne-Claude never asked for any financial help or sponsorship. In order to realize their projects, they established a foundation which sold the preparatory drawings, photographs, gadgets to get funds.

There wouldn’t be enough room on this page to cover all of the land art projects that Christo and Jeanne-Claude made over the years. I’d like to feature one of my favorites, which took place simultaneously in two countries separated by a history of pain and suffering: Japan and the US. The distribution and colors of umbrellas depended on land conditions: in Japan, where land is precious, umbrellas stood close to each other and were blue as the skies. In California, the umbrellas were put along uncultivated grazing land in all directions and their yellow color reflected the dry land. Imagine how one day in October 1991, at sunrise, 1,880 workers began opening of 3,100 umbrellas in Ibaraki and California.

The last project which will be accessible to view is the recreation of a work from 1962. For 16 days from Saturday, September 18th to Sunday, October 3rd, 2021 all visitors to Paris will have a chance to see L’Arc de Triomphe, Wrapped. 25,000 square meters of recyclable polypropylene fabric in silvery blue, and 7,000 meters of red rope will be used to defamiliarize the popular monument. You cannot miss it.