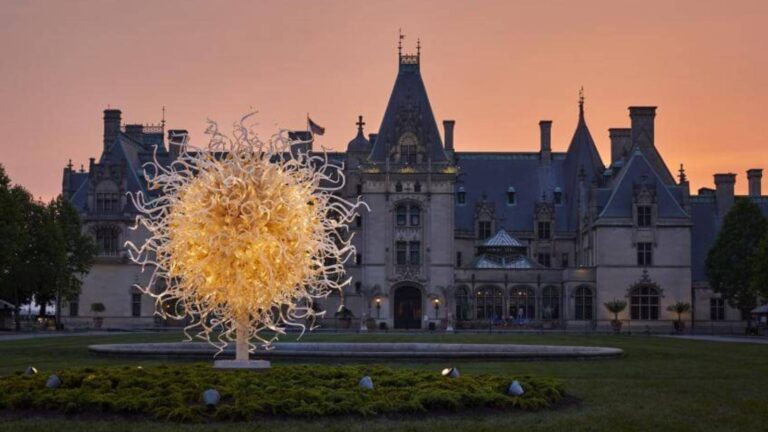 While on vacation this past week, I got to see a real treat – an exhibition of Chihuly glass at the Biltmore Estate in Asheville, North Carolina.

Dale Chihuly (b. 1941) is an American glass artist best known for his brightly-coloured and inventively-shaped public installations that have been featured in museums, gardens, and other public places throughout the world. Biltmore is a huge French Renaissance-style mansion designed by Richard Morris Hunt for George Vanderbilt. The glass can be found in Biltmore’s beautiful gardens, which were designed by Frederick Law Olmstead. There are sixteen Chihuly glass installations on display at Biltmore, including one is inside the house itself, one in the conservatory, and two in Biltmore’s Antler Hill resort area. In the images below, you can see Chihuly himself with some of his works at Biltmore.

Chihuly glass is full of bright colours and wild shapes. It often reminds me of candy, exotic flowers, and even lava or sea creatures. Two of my favourite works in the exhibition, Float Boat and Niijima Floats, are made up of brightly-coloured orbs of glass that look like gumballs to me. These gumball-orbs float in one of three ponds in the Italian Garden. Some are in a boat, while others sit amidst the lily pads with fish swimming around them. Several other compositions include shapes called “fiori” that look like tentacles, or pieces of taffy, or jets of lava. A set of these in all different colours can be found under Biltmore’s pergola. Other favourites included Paintbrush Tower and Electric Yellow and Deep Coral Tower, both of which are like red Christmas trees, and Laguna Torcello II, which looks beautiful inside the mansion in the Winter Garden. Up close, there’s lots of texture in Chihuly glass. Some pieces sparkle a little, while others have striated bands of shading or marbled textures of different colours. The glass always looks thick and sturdy – never fragile.

The Chihuly glass fits so well into the garden environment at Biltmore that the two seem to have been made for each other. In fact, I briefly didn’t even realize I was looking at a piece since it seemed to be a part of the landscape. The exhibition map describes the set-up as “an intriguing juxtaposition of the masterworks of two consummate artists – premier American artist Dale Chihuly and revered Biltmore landscape architect Frederick Law Olmsted”. I completely agree since the landscape and the artwork together phenomenally.

They look great together in the daytime, but they look even better at night. On some evenings, Biltmore is running Chihuly Nights, where visitors can enjoy the Chihuly glass lit up after dark. I was fortunate to see all the works during the day and then again at night. It was interesting that some of my favourites in the daytime didn’t necessarily look as good at night and vice versa. Anything red or white, however, looked spectacular. Red Reeds, which is two clusters of long, thin, red shapes, looked like two massive bonfires on the hill. Sole d’Oro, which is an energetic white ball of thin tendrils on the lawn in front of Biltmore looked spectacular. The atmosphere at Chihuly Nights was very festive. There was music, drinks, and lots of people walking around. A Chihuly Nights ticket lets you into the first floor of the mansion, but I was lucky enough to have a ticket to the special evening tour of the upper floors as well. As part of this tour, I got to stand out on the balcony overlooking the front of the house, and I could see some of the Chihuly glass from that vantage point. It was really magical.

Chihuly at Biltmore was a wonderful experience. But it’s, unfortunately, coming to an end on October 7. The press release says that the show is Biltmore’s “first art exhibition ever in its historic gardens”, which I hope means that there will be more to come. Previously, Biltmore has hosted indoor exhibitions, like costumes from the movie Titanic earlier this year. As for Dale Chihuly, he does stuff like this all the time and everywhere. For example, he is having one at the Kew Royal Botanical Gardens in England next year. He also has his own permanent museum, Chihuly Garden and Glass in Seattle. If you will be in North Carolina this week, see if any tickets are still available. If not, learn more about visiting the beautiful Biltmore estate, or see where else you can see Chihuly glass in temporary or permanent exhibitions.

If you would like art involving glass, here are some other articles you may enjoy: