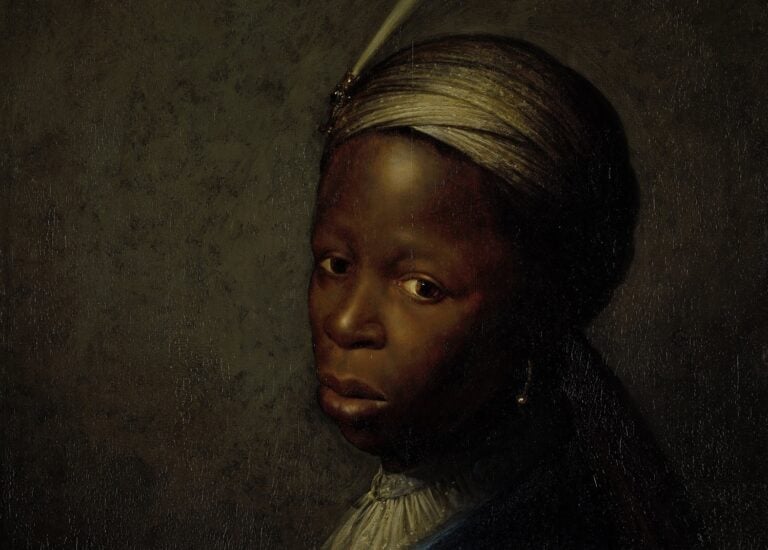 Around the World with the National Portrait Gallery: Africa

Afro-Amsterdam was not like what you think it was! During the 17th century, the African community lived amicably with the local community in the neighborhood where Rembrandt’s home was located. It is also the present-day location of the Rembrandt House Museum, the host of the exhibition, HERE: Black in Rembrandt’s time. This exhibition is one of the ripples in the ongoing stream of decolonization much like Fred Wilson’s Mining the Museum series of the early 1990s. The review discloses a few theories to understand the process of decolonizing of the Rembrandt House Museum.

The Rembrandt House Museum acknowledges overlooked historical paintings in HERE: Black in Rembrandt’s Time. Guest-curated by Stephanie Archangel and Elmer Kolfin, the exhibition unites artworks from all over Europe. Presenting a timeline of 1620 to 1660, in reference to the location of Jodenbreestaart, Amsterdam, the exhibition displays an erstwhile egalitarian treasure of paintings that are absent of the stereotyping of black people. Moreover, the show verifies three facts. One: artists drew from life. Two: there was an influx of black inhabitants to the Jodenbreestaart. Three: black people were not identified solely as slaves.

Artists had utilized various mediums like ink, chalk, clay, etching, and oil to render landscapes, market-scapes, and figurines. Although a standing African man by Rembrandt was just another free pedestrian in Amsterdam, there is not much information available about the black figures in the paintings. The second gallery of portraits of black people presents a depiction of black people in biblical mythological stories like Adoration of the Magi and Baptism of the Eunuch. Besides, the portraits and tronies like that of Don Miguel by Jasper Beckx, or King Caspar by Hendrick Heerschop, respectively, among others, steal our attention. Also, the archival material from Amsterdam Municipal Archive narrates in detail the horrendous fate of the black community by the end of the 17th century.

In addition to Rembrandt and his contemporaries’ paintings, the show also exhibits 10 contemporary black artists. Iris Kensmil, Iriée Zamblé, and Charl Landvreugd, among others, charge it with cultural contemporaneity. Worthy of mention are Iris Kensmil’s portraits of influential black political leaders. Curators, thus, have not only mined history but also linked it with the present. The context of Fred Wilson’s exhibition Mining the Museum is a link to this mining, an act of denial to the undestroyed prejudices, and a support to the Black Lives Matter movement.

Fred Wilson and Mining the Museum, 1992

“Mining the Museum made legible the racism implicit in the Maryland Historical Society’s view of the population. In this way, the installation answered a leading concern for those situated in and around the city of Baltimore, whose starkly divisive race relations were made starker in recent decades by growing numbers of severely disenfranchised blacks, Native Americans, and Asian Americans.”

Darby English, How to see a Work of Art in Total Darkness, 2007, MIT Press.

Fred Wilson re-established his career as a radical critique artist after having worked in a museum as a curator and guard. Mining the Museum is a series that investigates the unexposed archive and collection of the Maryland Historical Society. Wilson had reframed the art objects, juxtaposing symbols of slavery like shackles with exotic and popular antiques like silverware and casts. He had decolonized the institute by re-linking the collection conceptually.

“There is a lot of silver in this museum. I created one vitrine of repoussé silver with the label, Metalwork 1793–1880. But also made of metal, hidden deep in the storage rooms at the historical society, were slave shackles. So I placed them together because normally you have one museum for beautiful things and one museum for horrific things. Actually, they had a lot to do with one another; the production of one was made possible by the subjection enforced by the other.”

Fred Wilson, Constructing the Spectacle of Culture in Museums, in: Christian Kravagna (ed.), The Museum as Arena, 2001. Transversal.

Why does revealing ‘black’ paintings pose as an act of decolonizing? The processes of colonization of cultural objects began under despotic impositions. In his work Museums in the Colonial Horizon of Modernity (1992), Walter Mignolo variably explains this historic phenomenon, fragmenting the concept through colonization of power, knowledge, and being. In addition, the rampant slavery, according to Mignolo, was an autocratic act of colonizing the ‘being’, thereby endowing the colonized power and knowledge.

The Rembrandt House Museum contributes to the decolonization of knowledge, with respect to the theory of Mignolo. The museum, by unearthing the collection, has made an attempt to become transparent, through the diligent effort of curators. Amsterdam was not harmed by self-colonial imperialism. Due to the method of classification and assessment, the objects, which were collected from colonies remained colonized in European museums. The exhibition epitomizes the rectification of inhibited and generic typology. Thus, the curators and the museum have attempted in scraping off the colonial-patina.

Possessing a collection that portrays a community of the ‘Other’,1 the display provides unheard anecdotes about the free-black-populace. Hence, Rembrandt House Museum compulsively participates in the global unlearning through aesthetic appeal. The museum also exposes the grandeur of ethnological interventions of the past. And, how a cultural and racial intermingling served a better place to live in!

C. Kravagna: The preserves of colonialism: The world in the Museum, 2008. Transversal.

W. Mignolo: Museums In The Colonial Horizon Of Modernity, 1992.