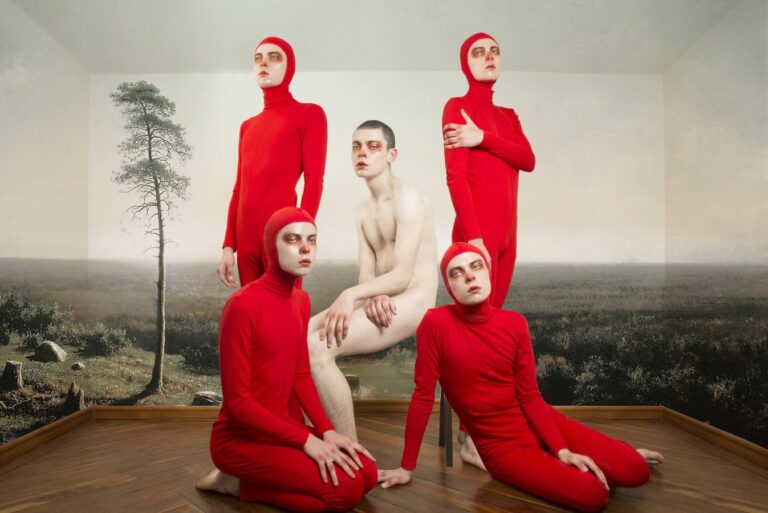 According to Goethe, melancholy is a sense of sadness whose causes are unknown. Its symptoms are the only thing you are aware of, that’s why you end up intensely feeling the loss of something, but you don’t know exactly what it is. All you can do is wallow in that tender torment until you get used to it. This theme is dealt with extreme elegance by the photographer Andrés Marti, who blends the concept of aesthetic with that of emotionality, and unprecedented beauty.

Andrés Marti was born in 1989, he grew up and studied in Bogotá, and is a Co-founder and Director of the Comes Cake Image Laboratory. He made his debut with the photographic series named Reverdecer, dedicated to people detained in different prisons in Colombia, as initiation of his fight to improve inclusion, freedom, and second chances. In his next series Otredad (Otherness), Andrés will unveil a new kind of prison: that of the mind.

The keyword to understand this project is melancholy. Many poets and philosophers have talked about this feeling often associating it with the idea of beauty. In fact, in his work beauty and pain are closely connected and this relationship manifests itself through those purely aesthetic characteristics that make Andrés Marti a unique contemporary artist.

His models are friends, acquaintances, and he also expresses himself through self-portraits, in an attempt to understand his own and others’ feelings, placing his subjects in a timeless universe that actually represents our earthly path. According to the artist, the identity of each individual turns out to be simple as a whole, but sometimes it appears fragmented, in an intricate tangle of facets.

“Pruning a plant is done in order to give it the opportunity to be reborn, a rebirth only visible by waiting. Then shoots of a new being are born that is now more resistant to the passage of time.”

In Otredad the subjects are represented as culture mediums, in which germination corresponds to the need to get out of our skin, since pain settled into us like a seed, which allowed us to grow and be overwhelmed with the beauty of our renewed soul. These bodies inhabiting the aforementioned universe represent the triumph of the spirit over the matter and they let themselves be overwhelmed, passively, by the bows, the paper, the flowers, and all the elements that surround them, expressing a mix between divine ecstasy and resignation.

Through these representations we are invited not to be ashamed of ourselves and accept our frailties, because they are beautiful. On the other hand, his visual language is perfectly suited to the needs of contemporary society, which increasingly rejects the concept of toxic masculinity and embraces a new type of male beauty, more and more refined and directed towards gender fluidity. Therefore, the first impression causes you to no longer feel like identifying those humans as “boys” or “girls”. They are just beings, flourishing beings.

To better explain the meaning of this photographic series, Andrès Marti answered some questions.

So first, the more obvious question: what does the word “otredad” mean in the context of your works?

This project was born in 2014. In that year I had a love breakup in its worst moment; during that time I took self-portraits, I liked to tell stories through my body, but that separation took me out of myself. I was not happy with myself, I was tired of seeing myself, but I really wanted to create to communicate what I felt, so I decided to do this photographic project where I could tell everything I felt through other bodies: bodies that generate feelings in me, and use them as vehicles to do catharsis of my feelings, choosing people who caught my attention and involving them, making them part of my sadness, of my intimacy. So the use I gave to the word “Otherness”, was and is how I see myself through others.

Is there any kind of metaphor hidden in the association with the animal and vegetable world? What is blossoming inside of mankind?

At first my work was really intuitive. Over time all these elements began to take on meaning and serving a purpose. What I find attractive about the use of fauna and flora in my work is the relationship with abundance and beauty itself, being able to generate a contrast with the sadness of those characters, and to touch the concept of melancholy. They are subjects immersed in their pain who do not realize the beauty that is inside of them or around them, they are so immersed in their thoughts that they do not realize how much the pain they went through transformed them and made them blossom, but they refuse to let go of the pain because it was the way they discovered themselves and felt alive.

Do you think the events of life that change us, free us or subjugate us? Is it an awareness of our condition of growth, or more like an unconscious process of the soul that devastates us, like the roots of a tree infiltrating the foundations?

If overwhelmed to the point of not understanding them, not appreciating them; the events of life are all worth living, the power lies in the interpretation of those events, they are the ones that can change us, free us or subjugate us. It’s interesting because while I was researching melancholy, I found an interesting term which is “Positive melancholy”. That’s the name of a method used in the Renaissance period to create, which consisted of traveling into the deepest pain, then creating and coming out victorious without falling into depression. Every experience generates roots, the power lies in our ability to guide the growth of those roots like the branches of a bonsai. Undoubtedly in Otredad the strongest and deepest roots are sadness, we let them grow and we cling to them until we become one, until we can’t understand ourselves outside of that feeling.

Besides being beautiful, your models are pretty young. Youth is the flowering period par excellence. What do you think of the new generations?

I believe that the use of such young models is due to the situation I am in today. As a young grief, it could change considering the time my work will take to mature and include more shades of my life. I will be able to connect with different generations and moments of beauty. The artistic project changes along with the emotional needs of the artist.

About the visuals of your art: pastel colors, red noses and cheeks predominate. It is something that is often seen, especially when it comes to beauty, but you are able to give these attributes a personal touch. Do you think you’re being influenced by contemporary aesthetics? Do you have any references?

I don’t know how to describe it but I know that the aesthetic that belongs to me is part of an aesthetic trend or movement that will have a name in the future. My project is influenced by projects like Palomo Spain, Abdulla Elmaz, Alessandro Sicioldr, Eero Lampinen, and these are projects that nowadays flit a lot between ethereal, art and fashion.

If it was up to you, how would you call this potential artistic movement?

I hope that in the future it can be a movement. I feel that humans are very connected with their feelings right now, and they are feeling more proud of them, whenever we see people recounting and normalizing mental illnesses like anxiety and depression, and this is evident in art.