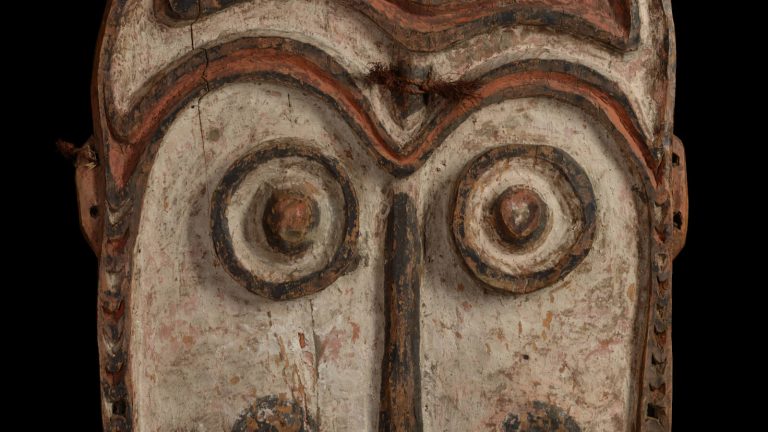 Ancestor Mask is a masterpiece of Papua New Guinean art. It symbolizes a vanishing tribal lifestyle rarely seen outside of Oceania.

Papua New Guinea is a land of tribal traditions and Indigenous integrity. In many areas, it is a land untouched by the modern developed world. Cultures exist without electricity, plumping, paper money, and the majority of comforts that most urban dwellers would consider essentials. However, despite the lack of consumerism and amenities, an artistic richness thrives in Papua New Guinea. Small villages create beautiful works of art that have religious significance, political importance, and aesthetic value. One such village is the Chambri Lake Village where they created the Ancestor Mask which is a masterpiece of Oceanic art.

Ancestor Mask is a large low-relief sculpture carved from hardwood found in the local Sepik Region surrounding the Sepik River. It measures 47.4 inches/120.5 cm high, 22.4 inches/57 cm wide, and 3.1 inches/8 centimeters thick. Despite its ancient tribal appearance, it is not very old. It was created in the early 20th century, so it is barely 100 years old. However, despite 100 years of age, the natural-based pigments still remain freshly vibrant.

The sculpture was originally on the exterior façade of the Ceremonial House in Chambri Lake Village. It was displayed under the pitched gables of the thatched roof facing the village center. As it peered over the village’s population, it was a constant reminder of the power and importance of the village’s ancestors. It reminded the people that dead ancestors were still present in the living community.

Anthropologists and art historians agree that originally Ancestor Mask acted as an intercessor or mediator between the visible and invisible worlds. It represents the face of a clan ancestor, and probably a male ancestor because the Chambri People have a patrilineal society. It was also associated with the sun as many ancestors were believed to join the sun and other elemental forces. Hence, Ancestor Mask could also be a Sun Mask in its protective and talismanic nature.

Visually, the sculpture is very striking. It has a limited but powerful color scheme of black, white, and red. The minimal color range increases the contrast among the lines, shapes, and forms of the mask.

At the top of the mask is a forehead filled with concentric rings of different colors. It is the cavity where the ancestor’s thoughts and feelings generate. The tribes of Papua New Guinea in the early 20th century were documented by Western explorers to have often eaten their dead relatives. The brains were a particularly prized meal because of its fatty tissue, but more importantly because it was the filling of the head. The head, or specifically the face, is still recognized by most human societies as the most individual and identity-linked feature of people. Hence, the predominance of masks in Papua New Guinea. Therefore, the special attention shown to the forehead speaks of the Chambri People’s reverence for thoughts and feelings.

Below the forehead are wide glaring eyes. They are circular with an intense round stare. When eyes are this expressive, they normally indicate extreme emotion. With Ancestor Mask, the emotion is aggression. There is hostile belligerent energy. The circles of the eyeballs frame the pupils, and almost take an abstract appearance. The eyes are not just a biological body part but a symbol of warning.

Emphasizing the eyes’ antagonism are the flaring nostrils of the nose. The mask is breathing heavily and with a quickened pace. This is the breathing of movement and readiness, not the breathing of peace and tranquility.

Why do sports teams and battle soldiers often perform a team chant or scream at the beginning of their confrontations? It is because the collective sounds heighten the adrenaline and testosterone. It accelerates the eagerness to fight. It prepares for combat. Ancestor Mask is sounding a war scream. Its mouth is large and open, displaying sharp rows of serrated teeth. Its tongue projects forward in defiance. Ancestor Mask is a spirit ready to fight for its people. It is a protective charm for the village against the evil intentions of rival clans.