Folk Art, Surrealist, Visionary, Americana, call it what you will. Minnie Evans’ (1892-1987) dream-like artworks speak of another world; a world which the artist believed God had given her insight to see. The North Carolina native’s oeuvre ranges in size and medium; but take a look at any of Minnie Evan’s artworks in the whole collection, and you will quickly notice that there is another-worldly aspect to them…from the colors and symbols to the overall themes of religion and a higher being. 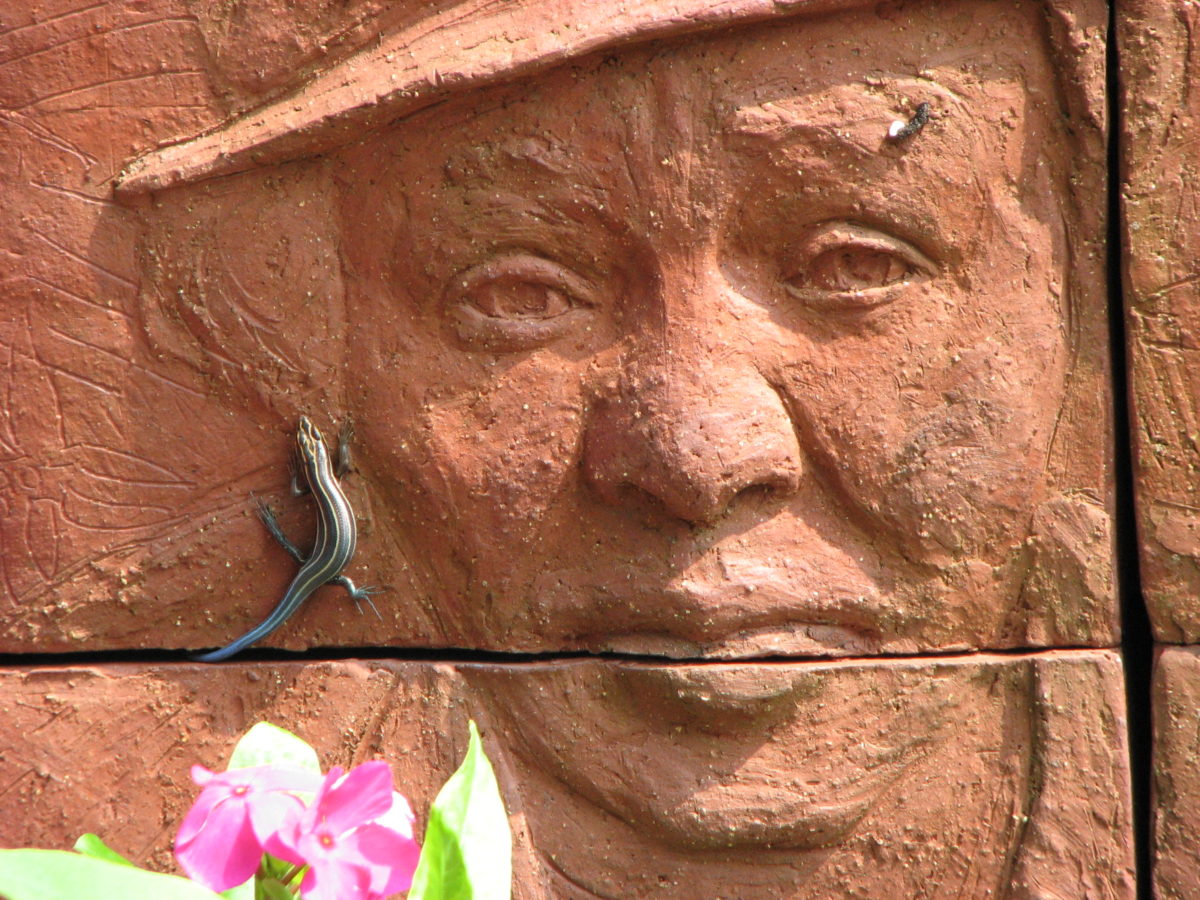 Born outside of Wilmington, NC towards the end of the 19th century, the visionary artist left school after the 6th grade to help provide for her family. Evans’ art, although from humble beginnings, has been shown across the US, and especially in Wilmington where she has been the center of numerous exhibits and events across the state.

Evans worked as a domestic and gatekeeper for Airlie Estate and later Airlie Gardens in Wilmington, often selling her paintings on the grass next to the park’s gates. Influenced by the lush greenery in the gardens, she stated that “Green is God’s theme color”; upon further inspection, there is evidence of influence from African and western cultures from which her ancestors stemmed from. 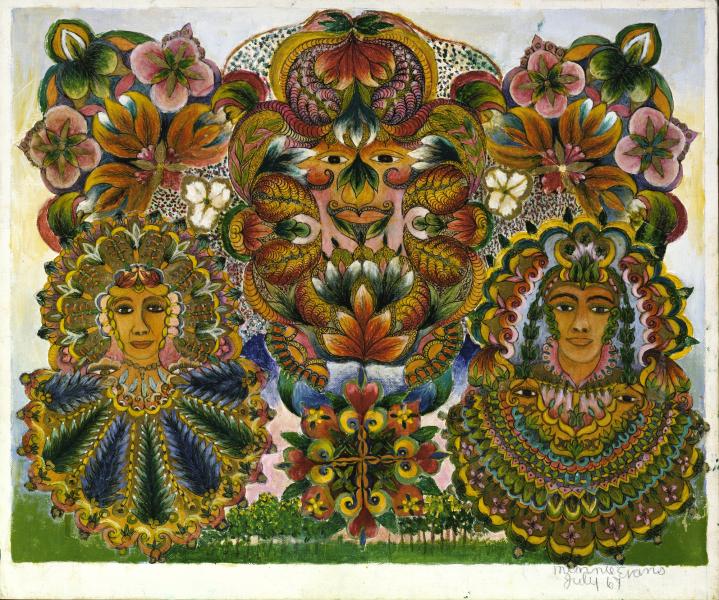 Part of the reason for the excitement which still surrounds her dream-like artworks is the artist’s creative process, hardly even understood by Evans herself.

…It was shown to me what to do…I have to look at them like everybody else. They are just as strange to me as they are to anyone else… 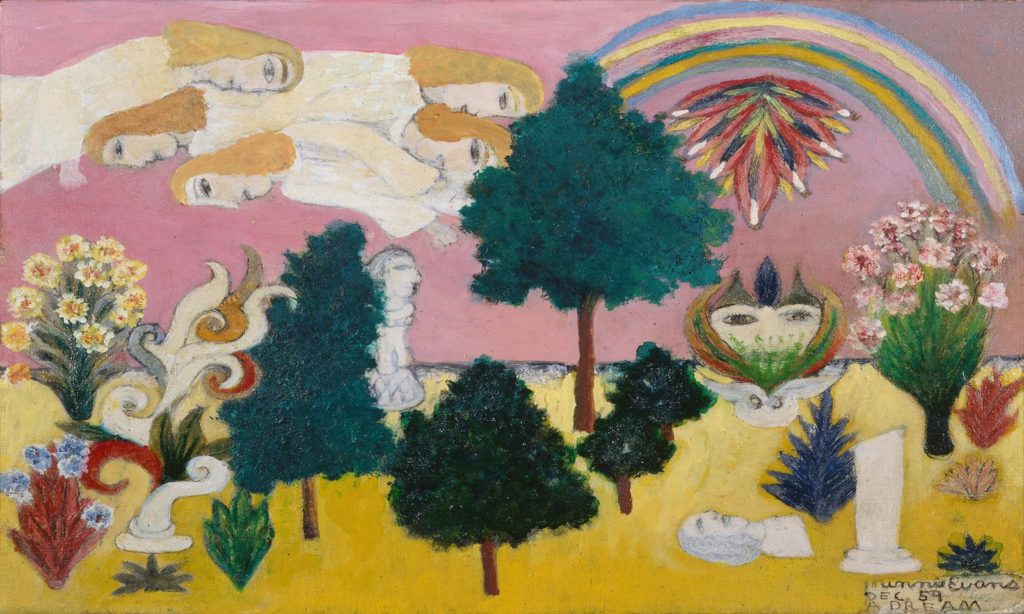 The artist stated that she was the recipient of visions since a young age; it was not until she reached adulthood where she records that a voice spoke to her saying “Why don’t you draw or die?” The symbols and Biblical images were as foreign to Evans as they are to the viewer.

I have no imagination…they just happen.

Evans was the subject of a 1983 documentary aptly titled “The Angel That Stands by Me.” In the documentary, Evans recounts that she was not formally trained in regards to art because no one knew what to teach her:

Now if I had been painting life, studying how to make peoples’ faces, maybe I’d have had a teacher…God has sent me a teacher…an angel that stands by me. 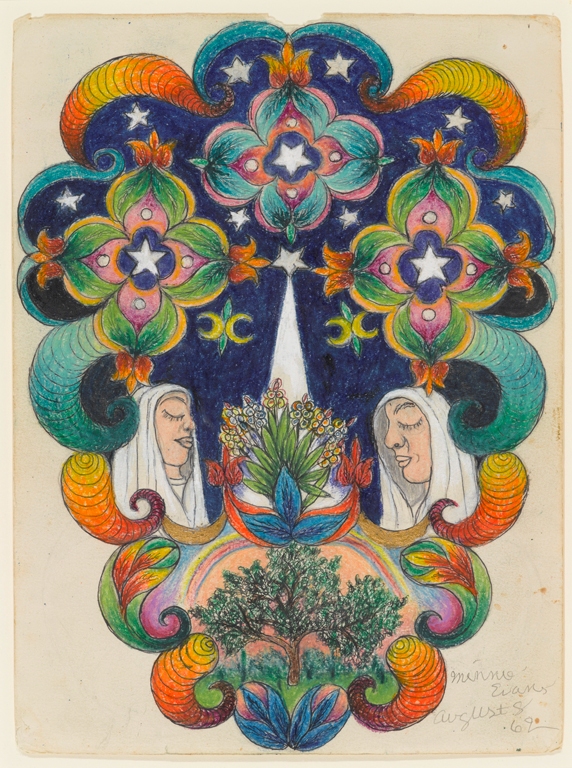 What is surprising to learn, is that Evans never really grew used to the voice she heard which directed her to draw or paint. The artist had a story for every painting and drawing, detailing what can only be described as a mystical knowledge of a world outside of our own realm. 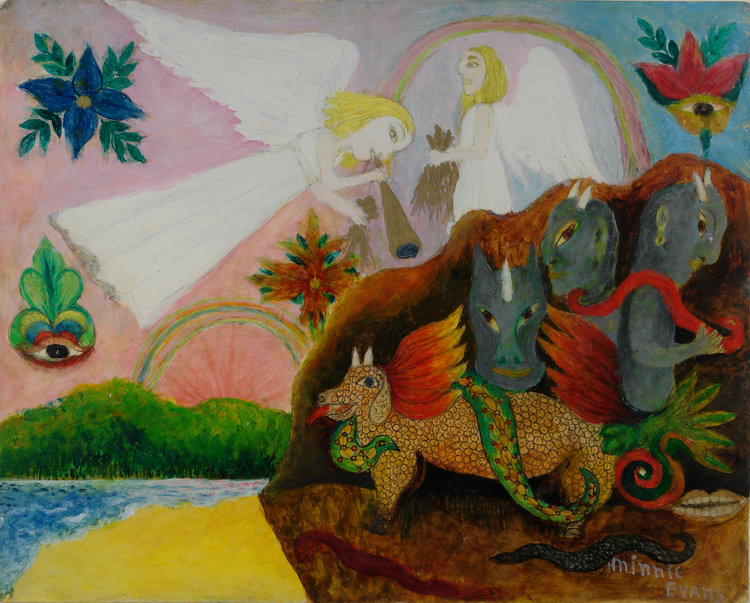 Minnie Evans, Angels and Demons, 1975, oil on canvas board,  The Center for Intuitive and Outsider Art, Chicago

The idea of a visionary process is not new. But Evans’ out of body experience is worth discussing in terms of divine inspiration. (It could be said that the Renaissance greats such as Michelangelo and Leonardo received inspiration from the heavens – from a supernatural force outside of their control.)

Her artwork may be deemed primitive or child-like by some, but it is evident is that there is something special about the North Carolinian’s artistic style. Even though I am from the same region as the late artist, I still found myself drawn into her mystical world and creative process while researching her work for this piece, as if I was learning about her for the first time. 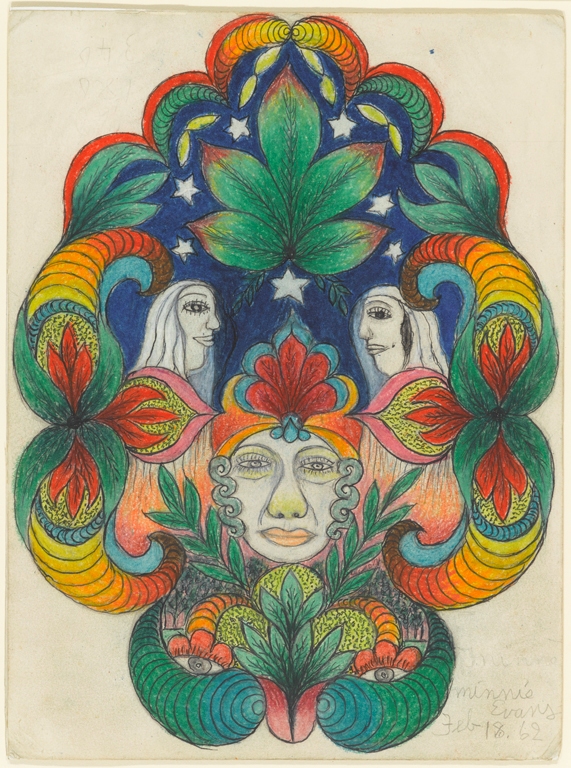 Visit Folkstreams to learn more about Evans’ dream-like artworks and catch a glimpse at the documentary.

If you find any joy and inspiration in our stories, PLEASE SUPPORT
DailyArt Magazine with modest donation. We love art history and we want to keep going with writing about it.
$5 $10 $25 $50 $100 MONTHLY
Related Topics:African American, American, American art, colorful, dailyart, featured, female artists, higher being, Minnie Evans, mystical, religion, visions