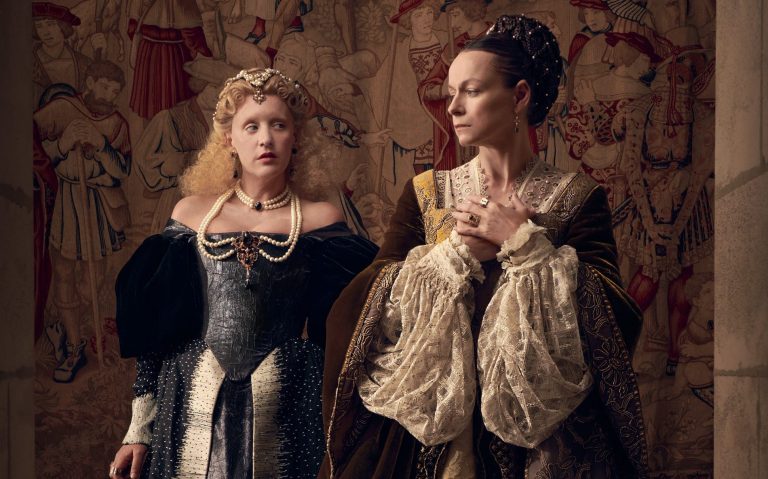 Still from The Serpent Queen, released by Starz. Insider. Detail.

Starz’s new show, The Serpent Queen, tells the story of Catherine de Medici’s life and reign in 16th-century France. In the first season, numerous Renaissance tapestries are featured in the background. Even more than Starz’s previous show, Becoming Elizabeth! Yet, three specific tapestries allude to the main character’s emotions based on their imagery and production history. Known as La Vie Seigneuriale tapestries, the woven works simultaneously mimic Catherine’s struggles and desires at the French court. Disclaimer, spoiler alert!

Starz’s new period drama is based on the book Catherine de Medici: Renaissance Queen of France by Leonie Frieda. As one of the most powerful and longest-serving rulers in French history, it tells the story of Queen Catherine de Medici (1519-1589).

In the first season, Catherine is only 14, an orphan, and married to a 16th-century French prince. On her wedding night, she finds her husband (Henry II of France, then a prince) in bed with another woman, Diane of Poitiers. As much as Catherine tries to deny it, Diane eventually becomes his royal mistress. We watch as Catherine tries to balance love, loyalty, and betrayal.

But recognized in every episode, repeatedly, are wonderful Renaissance tapestries hanging on the walls behind the characters. Therefore, you might be wondering, what are the tapestries, and why are they important to the show?

In episode six, we probably have the best view of the two main tapestries hanging in Catherine’s bedroom. The scene depicts the moment before Diane confronts Catherine in her bedroom about the marriage union between Catherine’s son, Francis II of France, and Mary, Queen of Scots. Flanking Catherine are replicas of tapestries almost identical in imagery and scale to the originals.

On the left is the La Lecture Parcours tapestry and on the right is the La Broderie tapestry. The pair are part of six at the Cluny Museum in Paris, France, called La Vie Seigneuriale (scenes from lordly life). Lecture parcours and broderie are French words for reading and embroidery. As you can tell, these activities are demonstrated by the tapestry figures.

While their imagery appears to be unexciting, its history would disagree.

It wasn’t until the mid-19th century that the La Vie Seigneuriale tapestries were discovered in a French chateau. Once art historians linked their production to the 16th century, the tapestries were understood to be woven in Flanders. Today, Flanders is a region of modern-day Belgium. During the Renaissance, it was a province of the Habsburg Empire, flourishing in cultural and economic development. Therefore, it was a huge center for tapestry manufacturing.

A commonality found throughout the tapestries is their millefleurs background. Millefleurs (another French word) translates to “a thousand flowers.” This decoration was a popular tapestry style made during the late 15th century into the early 16th century. These millefleurs tapestries display aristocratic elites and their servants enjoying daily activities outside. Therefore, many scenes involve courtoisie, that is courtesy activities such as bathing, walking, reading, and embroidery.

Yet another tapestry from the set is included in the series!

In episode four, the opening scene shows Catherine’s children standing outside her bedroom while she gives birth. Of course, behind them is another large tapestry from the La Vie Seigneuriale set. This particular tapestry is called the La Promenade (the walk). It illustrates a group of courtly people promenading in a lively outdoor setting. Again, the typical French millefleurs design covers the background.

According to the Cluny Museum, the weavers of the original tapestry set reused silhouettes (tapestry templates) while creating the design. As a result, the figures often seem to ignore each other since the figure’s placement breaks up the narrative. Knowing this oddity of production, perhaps Starz’s art team chose these particular tapestries as they correlate to the main character’s displacement… Since the young Catherine de Medici feels hopeless at the French court, I suggest the tapestries represent her separation from the young Prince Henry and Diane.

Although the intention of using the tapestry set is only known by the designers themselves, Art Director Daran Fulham and Set Decorator Jimena Esteve certainly took the show’s setting into consideration since all of the replica tapestries are in France today.

This is known through the final credits, since Starz credits the images in the series to RMN-Grand-Palais and Museé des Arts Décoratifs, Paris. RMN stands for the Réunion des musées nationaux which is a new public cultural establishment that reports to the Minister for Culture and Communication. While the latter, Museé des Arts Décoratifs, is a private non-profit organization with multiple locations in France.

The tapestries discussed in this article make up a tiny percentage of the works shown throughout the entire season of The Serpent Queen. At least 10 other tapestries are recognizable replicas featured in the set, such as the tapestries in the throne room, which change in the middle of the season! Or perhaps the tapestries in Diane’s bedroom… Can you identify these tapestries?