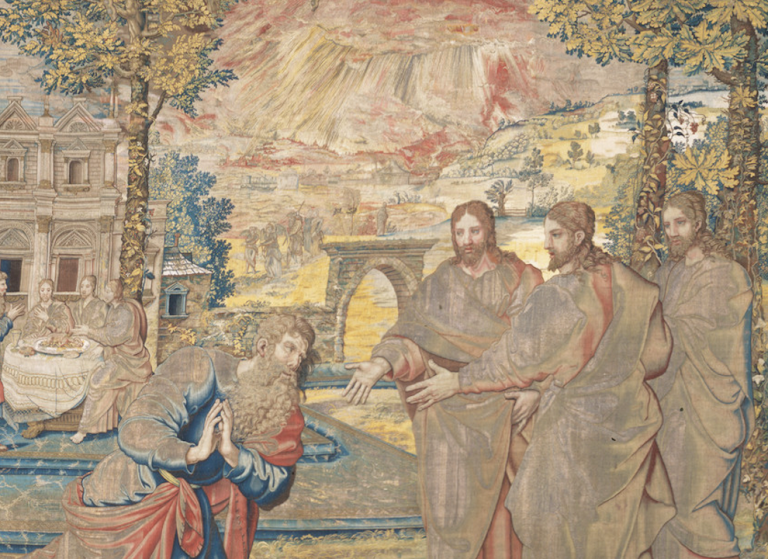 The Lost Portrait of Henry VIII: Art in Service of Power

Everyone knows King Henry VIII for having six wives and an infamous divorce that shook England’s religious core. He is renowned due to art historians writing historical fiction books and production companies dramatizing his scandalous affair with Anne Boleyn. However, I doubt you know how far Henry VIII went to secure his throne. In the 16th century, Henry VIII commissioned a set of tapestries known as the Story of Abraham series. These woven works of art strategically incorporated Abraham’s Biblical story and here’s why…

The Story of Abraham tapestry set is remarkable due to its authoritative message, delicate material, and long-lasting existence. They are presumed to be designed around 1537 by Pieter Coecke van Aelst and woven in Willem de Kempeneer’s workshop in Brussels between 1541 to 1543. According to the Royal Collection Trust, the owner of the Story of Abraham tapestries was likely King Henry VIII. Even though there is no concrete evidence to claim his ownership, the tapestries are hanging in the Great Hall at Hampton Court Palace today. As a matter of fact, Hampton Court Palace was the 16th century residence of Henry VIII.

Therefore, how is it possible that Henry VIII proclaimed his capability as holy ruler of England through the commission of the Story of Abraham tapestries? In other words, why is this interesting?

To be clear, the survival of all ten tapestries in the Story of Abraham series is phenomenal. Typically, Renaissance tapestries were destroyed by extracting expensive threads for debt payments. Appreciation for their survival is understood through Henry VIII’s marvelous royal tapestry collection. Out of the 300 tapestries recorded in Henry’s inventory, less than 30 remain today.1

So, the Story of Abraham series is the most impressive 16th century tapestry set to survive in Great Britain. It’s remarkable due to its large percentage of silk and gilt-metallic thread. And although Henry had the largest recorded inventory of royal tapestries, this was his most expensive tapestry acquisition. The costly set results from its length of about 88 yards long and 5 yards tall. Also, the basket-weaved boarders took extreme skill to execute, contributing to the expense.2

But what is the story of Abraham?

Well, in ten scenes, the tapestries depict key events of Abraham’s life as they are told in the book of Genesis (from chapters 12 through 24). Abraham was the founder of the Hebrew nation and was called by God to leave his home and start a new kingdom. So, the imagery in the tapestry set demonstrates Abraham as a loyal and faithful servant of God.

Certainly, Henry would have felt a connection to the biblical story of Abraham, given his previous marriages and his break with Rome. During the 1520s and onward, Old and New Testament role models were important to Henry VIII and played a vital role in his image as King of England. In June 1509, Henry married Catherine of Aragon, who gave him one daughter and no sons. During the 1520s, Henry desperately wanted to divorce Catherine and remarry for the birth of a son. Henry’s desire to divorce Catherine initiated his separation from Rome and ignited the English Reformation. Henry continued his desire for a male heir through his third marriage to Jane Seymour. Finally, on October 12, 1537, Jane gave birth to their son, Edward.

Abraham, founder of the Hebrew nation and first of the great patriarchs, was the Old Testament model most congenial for Henry as he sought to establish a new Church of England centered on the Tudor dynasty.

Henry VIII and the Art of Majesty: Tapestries at the Tudor Court.

Therefore, Henry VIII used the Story of Abraham tapestries to promote his ambitions as the head of the Church of England. The tapestry shown above, The Departure of Abraham, illustrates a scene from Genesis chapter 12. In this chapter, God calls on Abraham to lead the Israelites into Canaan. Henry would have been interested in this scene because just as God called Abraham to lead the Israelites, Henry felt called to lead his nation into the English Reformation (through the Church of England).

However, one of the best examples of Henry VIII’s political ambitions is illustrated in the tapestry below, The Circumcision of Isaac and the Expulsion of Hagar.

A Tale of Succession

Since the Story of Abraham series was presumably designed between 1537 and 1538, the tapestries illustrate Henry’s dynastic ambitions through his son Edward, born in 1537.

In The Circumcision of Isaac and the Expulsion of Hagar, Abraham’s wife Sarah and her handmaid Hagar are depicted in this biblical scene. As the story goes, Sarah told Abraham to impregnate Hagar due to her inability to conceive a child. Abraham’s efforts were successful, and Hagar later gave birth to a son named Ishmael. When they were older, Sarah was visited by the Lord, who told her she would give birth to a son. In the act of fear, Sarah asked Abraham to banish Hagar and Ishmael so that their son, Isaac, would not share his inheritance. This tapestry scene illustrates the circumcision of Isaac and the banishment of Hagar and Ishmael. Henry would have felt connected to this biblical story since his previous wives also had difficulty conceiving a son. But, Henry finally felt God’s blessing when Jane Seymour gave birth to Edward.

So, just as Abraham’s succession was undeniable in the book of Genesis through his son Isaac, Henry’s succession was confirmed through his son Edward. Therefore, Henry used Abraham’s story to showcase God’s approval of the English Reformation and the Tudor dynasty. Ultimately, Edward Tudor died at the age of 16, the legacy of the Tudor dynasty continued through his sisters Mary and Elizabeth Tudor. Some art historians believe the tapestry set was hung during Elizabeth I’s coronation as Queen of England.

Overall, it is without a doubt that the tapestry set was made for Henry VIII since there are inventory records of it at Hampton Court in 1547, and it has remained there ever since.

Thomas P. Campbell, and Maryan Wynn Ainsworth, “Introduction,” in Tapestry in the Renaissance: Art and Magnificence. The Metropolitan Museum of Art, 2002, pp. 6-9.