The Majestic Art of Alexander McQueen 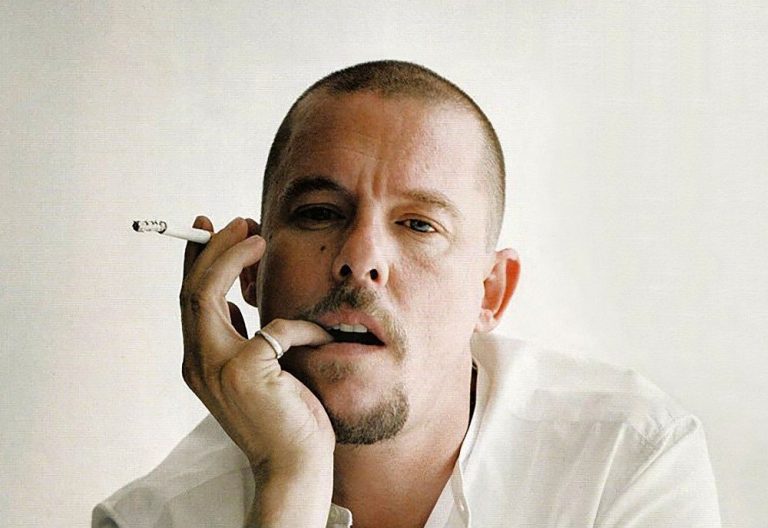 A “champagne supernova”, as Maureen Callahan calls him in her book, Alexander McQueen, was a pioneer of 1990s fashion. Along with Marc Jacobs, he was one of the most influential designers of the industry, remembered for his raw and powerful shows and his theatrical designs. Today, we will see the inspiration behind the art of Alexander McQueen.

Lee Alexander McQueen was born in 1969 in the East End of London, UK. At the age of 16, he left school and worked for Savile Row and later for Gieves & Hawkes, where he learned tailoring. Gradually, he built his reputation as a fashion designer. In 1992, McQueen received his Master’s degree in fashion design at Central Saint Martins College of Art and Design in London, UK. He attended the program after being encouraged by several people in the industry who saw his talent.

The collection he launched in 1992 was so amazing that Isabella Blow, an eccentric stylist of Vogue, purchased the whole line. She was also the one who convinced him to use the name Alexander as he was beginning his fashion career. Blow and McQueen became very close friends, and he always sought her advice and opinion. She had a significant impact on him. Blow was the only one who believed in him in the early stages of his career when everyone else called him “enfant terrible,” a reference to his chubbiness, and “a hooligan of English fashion” (Daily Telegraph).

In 1996, Givenchy, who owned the house of Louis Vuitton, approached Alexander McQueen. His technique fascinated them; he didn’t sketch the design of any clothes, but instead, he created them on the spot. He would take a pair of scissors and some fabric, and he worked directly on the model. Louis Vuitton saw his process of adding garments and embroidery and chopping things off as true couture.

However, McQueen felt restricted at Louis Vuitton; he did not have the freedom to create what he wanted. So, in December of 2000, he left and started working for Gucci. They invested in McQueen, and the money allowed the artist to unfold his creativity.

The Brand and Inspiration Behind It

In 1992, McQueen had already founded his brand. He drew inspiration from everywhere: art, film, and music. He paid tribute to Scorsese’s Taxi Driver and to Hitchcock’s The Birds and The Man Who Knew Too Much. McQueen opted for controversy and used shock-provoking tactics. He always meant to go political on his shows and broach various social and political issues. Each show had a different story to tell and a unique title; the only common theme was extravagance and drama.

McQueen’s main goal was to reconnect the romantic past with the postmodern present. It proved, however, to be a difficult job. The postmodern present did not recognize beauty or craftsmanship as relevant to art and culture. Besides, the conservative audience could not understand McQueen’s innovations.

Deeply inspired by Romanticism, McQueen was all about the lone artist. In 1992, he presented a show entitled Jack the Ripper Stalks His Victims, where he introduced his thorn-like overcoat and the three-point origami frockcoat.

The Victorian Era was a massive inspiration for McQueen. Specifically, he was into the gothic and the macabre. Plus, the Brothers Grimm fairytales fascinated him.

The “shadowy fancies” that Edgar Allan Poe wrote in The Fall of the House of Usher also had a considerable impact on McQueen – the details can be found in all of his collections. They are vividly present in his shows of F/W 1996-1997 Dante, F/W 2002-2003 Supercalifragilisticexpialidocious, and F/W 2010-2011 Angels and Demons. As Victorian gothic combined elements of horror and romance, McQueen enjoyed making similar combinations of love and death, light and dark.

Another major inspiration was McQueen’s hometown, London, and Scotland, his family’s native homeland. His Scottish roots meant everything to him. Indeed, he used elements of Scottish culture several times in his collections. Moreover, he liked to make political statements regarding Scotland. That is the concept behind his very controversial collection Highland Rape of F/W 1995-1996. The DailyMail called him “the designer who hates women” because of the collection. Although McQueen insisted that it was a reference to England’s rape of Scotland, some hurried to characterize him as a misogynist.

But it wasn’t all about the disturbed and savage. McQueen embraced folklore and tradition, as well. In the collection The Girl Who Lived In A Tree, he used the history of England as an inspiration for fairytale pieces.

Throughout his career, McQueen returned to the theme of primitivism several times. He saw a particular beauty in the image of the noble wildling, living in harmony with nature. It was also a means to express his disagreement with other designers who, according to him, did not respect ethnic apparel. They used expensive fabrics and created romanticized versions, which, the Masai, for example, would never wear.

It comes as no surprise that nature influenced McQueen profoundly and enduringly. Fittingly, it was one of the central themes of Romanticism. McQueen was a firm believer in the artistic beauty of nature; it is a motive present in many of his runway shows.

For McQueen, as well as for the Romantics, nature was a source of ideas and concepts. The influence of nature on his work is blatantly reflected in the collection Plato’s Atlantis of S/S 2010, his last fully realized collection before death. Inspired by Charles Darwin’s Origin of The Species (1859) but with a twist, the main subject of the show was the devolution of humankind, not evolution. Technology took the place of nature’s majesty. Extreme space-time compressions produced by the internet replaced the natural and the pure. The collection is also an example of what McQueen thought would be the future of fashion.

The so-called “armadillo” shoes were something that caught everyone’s attention. Many thought the shoes were just a part of the show. McQueen, however, put his models in these extraordinarily high and glamorous but potentially harmful shoes because they were part of the whole concept— a live exhibition.

Despite all of his success, McQueen was a deeply troubled person. He was sexually abused by his sister’s husband, without her knowing, and tragically uncomfortable in his skin, a situation that grew worse with the disapproval and condemnation of his detractors. McQueen even went through surgery to look thinner, but the problem was fathomless at that point.

The first incident that shook him was the suicide of his beloved friend Isabella Blow in 2007. As the years passed by, Blow became more and more addicted to alcohol and drugs. She pulled away all from her friends and colleagues, including McQueen. Regardless of how far apart they were, and despite Blow’s behavior, McQueen remained concerned. The news of Blow’s death devastated him. He dedicated his S/S 2008 collection to her, as she was the one who discovered him and believed in him from the first moment.

The incident from which McQueen never recovered, though, was his mother’s death from cancer in 2010. A day before her funeral, McQueen was found dead in his apartment. He died by suicide, unable to cope with his pain any longer.

Alexander McQueen was the epitome of a fashion artist. No matter what his shows depicted, women were always a significant inspiration for his work. The intention of all the dangerous accessories he put on his models was not to injure them; it was to create armor for them. He wished to create warrior princesses – delicate, but powerful and fierce.