A recent documentary that was filmed with the help and support of Stanley Spencer’s two daughters, revealed the personal anguishes the family endured due to the breakdown of Spencer’s  and the importance of their home in Cookham. Spencer was such a complex man; most definitely troubled. However, only parts of this can be seen in his artworks and, for once, there is a man whose history can be read in the compositions he was compelled to create.

Stanley Spencer was born in 1889, in Cookham; a picturesque village in Berkshire, England. The family were a close one where art and music took centre stage. The family were entrenched in the history of Cookham and the village itself was family to Spencer. A delicate young boy; his family were reluctant to allow him to be schooled in the traditional way, and so was taught by his older sisters. From early beginnings, Spencer showed a talent for drawing and, with the help of a local landowner, the solitary young man, whose greatest joy would be to walk the country lanes of Cookham, was sent, in 1908, into the big city to the Slade School of Fine Art to study further. [caption id="attachment_9817" align="aligncenter" width="713"] 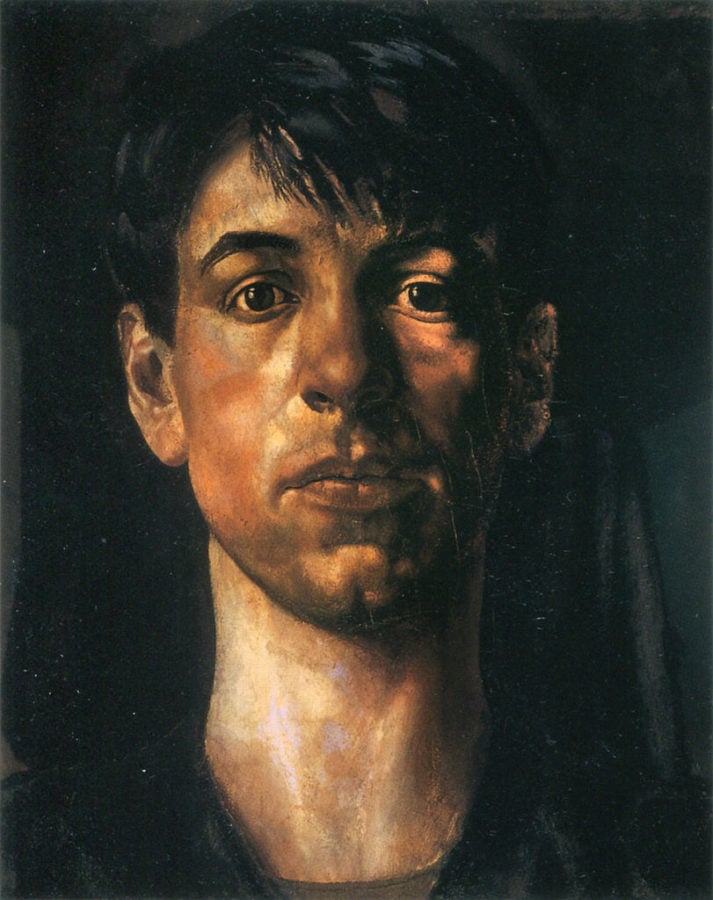 THE BIG BAD OUTSIDE WORLD

At the Slade, Spencer’s classmates and peers were a formidable force of art, and included Mark Gertler, Richard Nevinson, Paul Nash, David Bomberg, and Dora Carrington. All were characters and for the shy, quiet Spencer, who commuted every day from his home, these people would be terrifying to him. Known as ‘Cookham’ by the others, Spencer was part but not part of the group. Out of all of them, Spencer kept to his own style and his early works reflected his love of home; not for Spencer was the outside world an inspiration. [caption id="attachment_9825" align="aligncenter" width="699"] 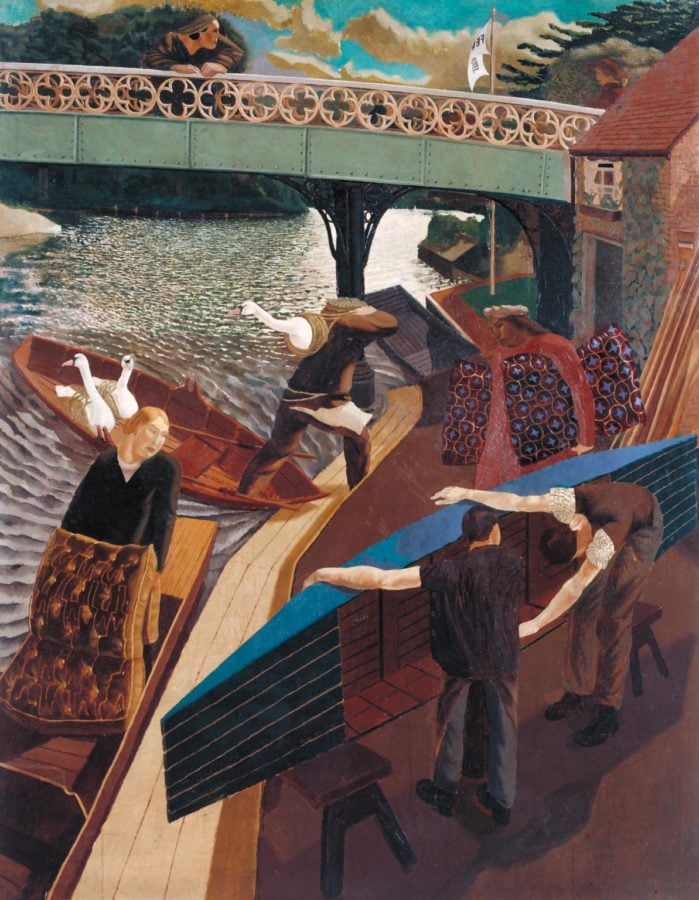 Stanley Spencer, Swan Upping at Cookham 1915-9 Sir Stanley Spencer 1891-1959 Presented by the Friends of the Tate Gallery 1962 https://www.tate.org.uk/art/work/T00525[/caption] World War One came, and with it, Spencer’s desire to do something for the war effort. With his puny physique, it was clear he would not be able to enlist as his brothers had done; and so Spencer joined the ambulance corps. His journeys took him to Macedonia and his experiences there were revealed in a series of large canvases he produced, and this is a particularly strong example: [caption id="attachment_9818" align="aligncenter" width="1081"] 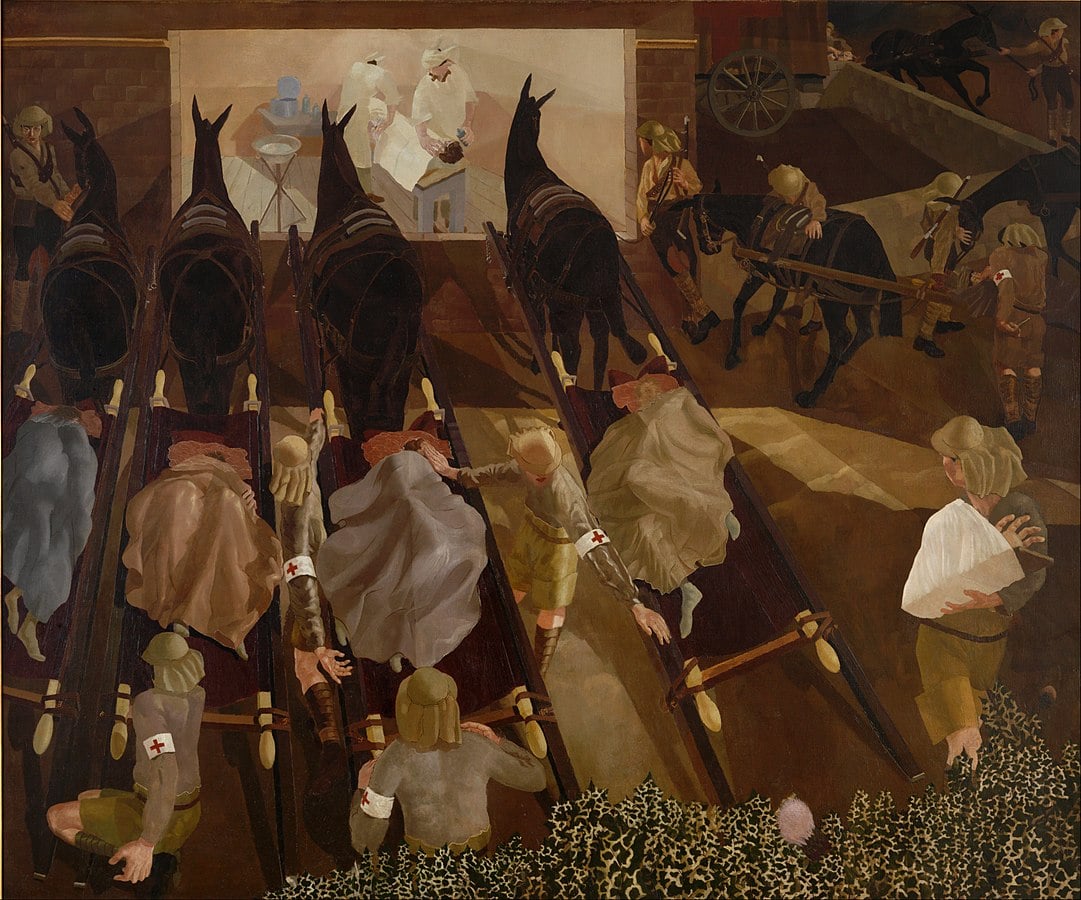 Stanley Spencer, Travoys Arriving with Wounded at a Dressing-Station at Smol, Macedonia, 1916, Imperial War Museums[/caption] On his return to his beloved Cookham, Spencer met and fell in love with Hilda Carline. She had been a fellow artist at the Slade and the sister of the artists, Richard and Sydney Carline.

Hilda and Spencer were married in 1925 and had two children: Unity and Shirin. The life that Spencer wished for himself in Cookham was a reality. But, there were dark clouds on the horizon. [caption id="attachment_9821" align="aligncenter" width="711"] 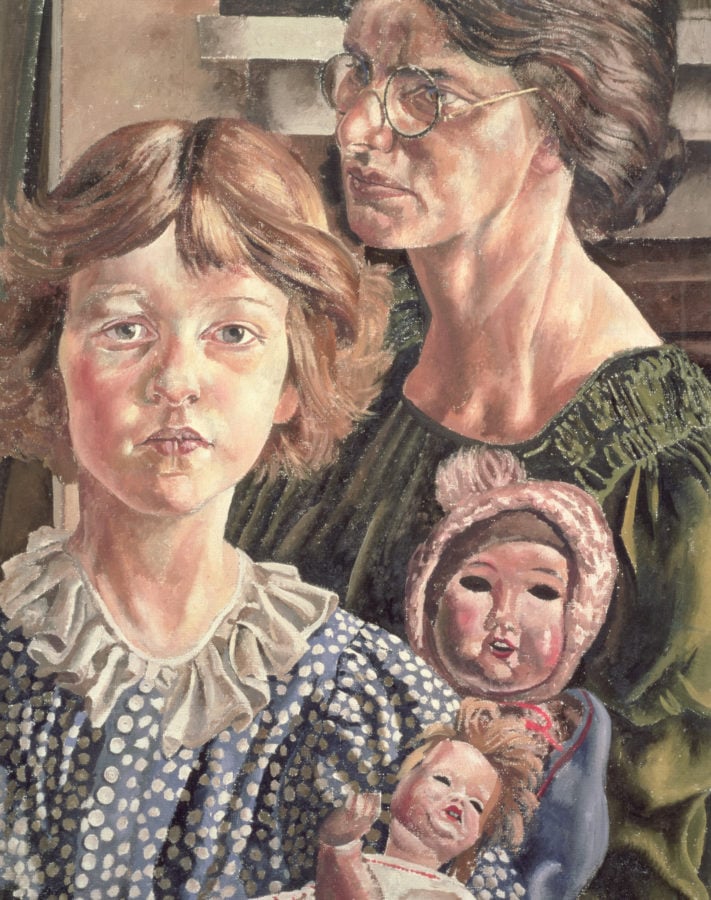 Stanley Spencer, Family Group: Hilda, Unity and Dolls, 1937 (oil on canvas) by Spencer, Stanley (1891-1959); Leeds Museums and Galleries (Leeds Art Gallery) U.K[/caption] If one painting sums up what Cookham meant to Spencer it is this one, Cookham Resurrection. [caption id="attachment_9820" align="aligncenter" width="1920"] 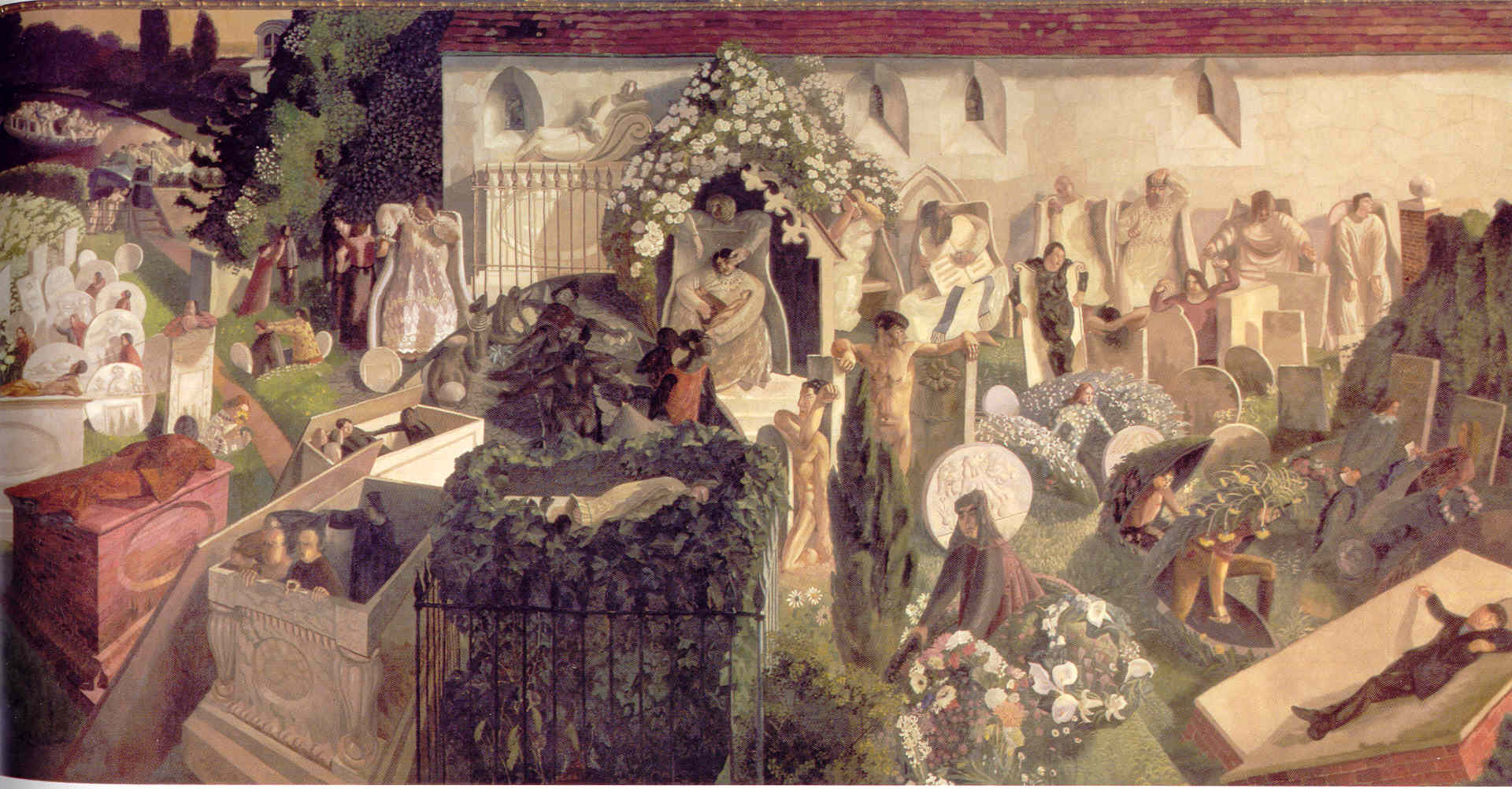 Stanley Spencer, The Resurrection, Cookham, 1924–7 ©Tate, London[/caption] In this, Spencer places Cookham churchyard at the heart of the resurrection. Friends, families, neighbours all reunited. This huge canvas is at Tate Britain and with seating placed strategically in front of it, you can spend time exploring the joy that those who have been released are feeling. Spencer even placed himself and Hilda on the canvas.

While Spencer deeply loved his first wife, his obsession with the artist Patricia Preece destroyed the idyll that Spencer had created for himself. It was terribly sad that he couldn't see that Hilda was so right for him until it was too late. He wanted something that was ‘perfect’ and it wasn't to be. [caption id="attachment_9824" align="aligncenter" width="736"] 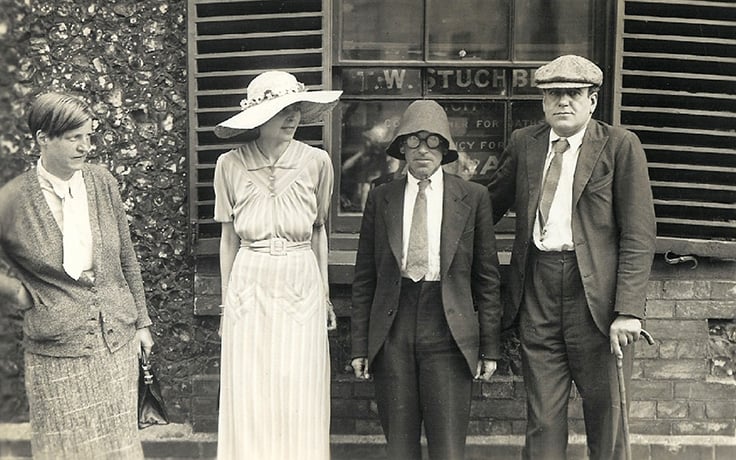 © Archive of the Stanley Spencer Gallery, Cookham, Berkshire stanleyspencer.org.uk[/caption] Directly after the divorce in 1937, Spencer married Patricia and they moved into Stanley’s home. The tragedy was how he never seemed to realise that Patricia was using him and never consummated the marriage because she was in a lesbian relationship. The nudes he painted of them during that time are so pathetic, in the true sense of the word. [caption id="attachment_9819" align="aligncenter" width="740"] 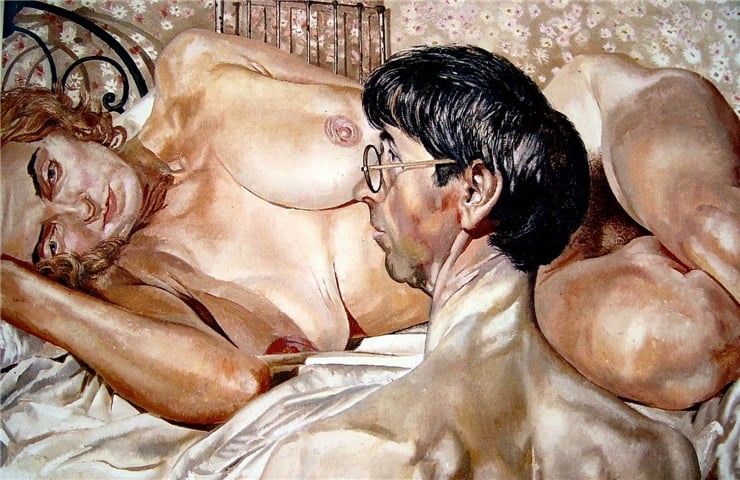 Stanley Spencer, Self-Portrait with Patricia Preece, 1936, The Fitzwilliam Museum © Estate of Stanley Spencer. All Rights Reserved, Bridgeman Images.[/caption] Eventually, Spencer moved out, leaving Preece and her lover, Dorothy Hepworth in the home that had once been such a centre of Spencer’s life. He moved to London, and had rooms there that overlooked a local fair. This work is dazzling and the subject matter seems to be a good indication of the inner turmoil Spencer was experiencing. [caption id="attachment_9823" align="aligncenter" width="558"] 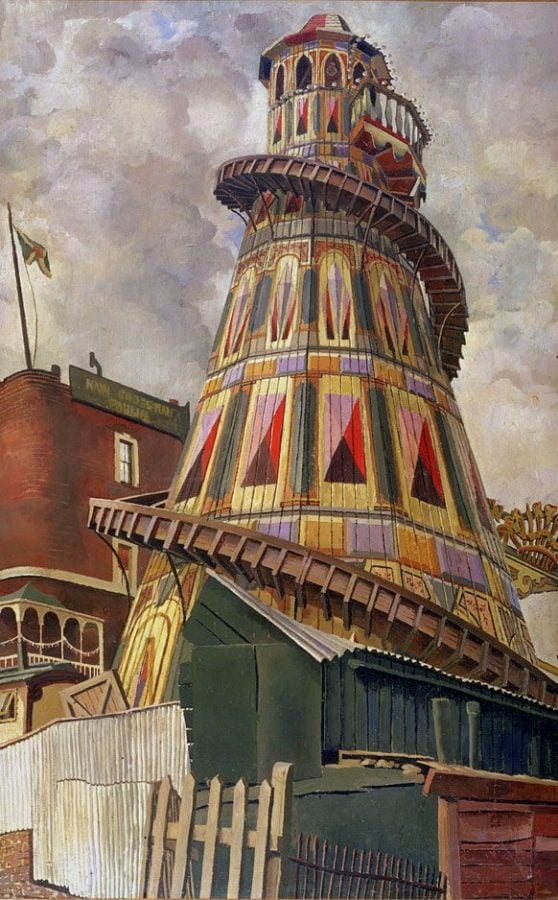 Stanley Spencer, Helter Skelter, 1937 © the estate of Stanley Spencer. All rights reserved, 2014 / Bridgeman Images. Photo credit: Museums Sheffield[/caption] Despite the divorce, Spencer would still depend on Hilda for support and even attempted a reconciliation but it was not to be and any hope he had ended in 1950 with Hilda’s death.

Patricia Preece, who had control of Spencer's finances, had rented out the house in Cookham and refused to grant him a divorce that would have freed him from the situation. Spencer continued to paint and exhibit, but his home life was never going to be the one he had hoped for and portrayed in many of the works he set in his beloved Cookham. Following his knighthood, Spencer was diagnosed with cancer and his remaining days were spent with friends where he still continued to paint. His final self-portrait is brutally honest. [caption id="attachment_9826" align="aligncenter" width="717"] 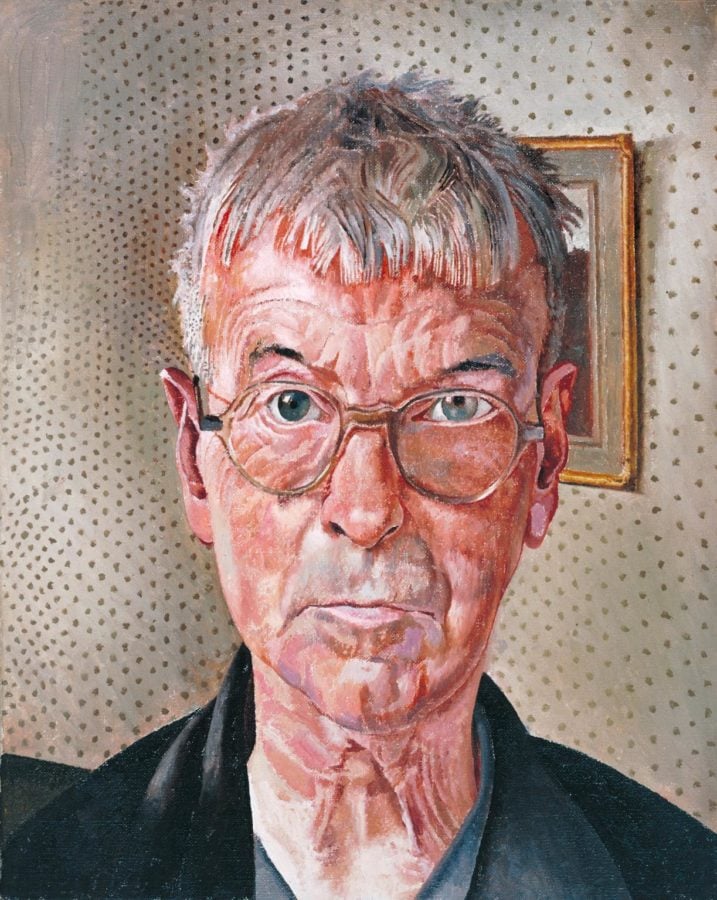 Stanley Spencer, Self-Portrait 1959, Presented by the Friends of the Tate Gallery 1982 https://www.tate.org.uk/art/work/T03335[/caption] Sir Stanley Spencer died at Cliveden on 14th December 1959. His ashes were interred in Cookham; the homebird returning to his nest. [caption id="attachment_9829" align="aligncenter" width="617"]