In May 2022 the long-awaited exhibition on Philip Guston titled Philip Guston Now finally opened at the Museum of Fine Arts in Boston. The show was supposed to take place in 2020 however, due to the pandemic, they postponed it. Most importantly, controversy emerged regarding some pieces featuring hooded figures, similar to the KKK costume. The team worried about the public’s reaction in the wake of George Floyd’s murder. Not everyone shared their opinion though. In fact, many called the museum a “coward” and demanded to move it back. Finally, they agreed to open the show in 2022.

Who Was Philip Guston?

To begin with, let us talk about the artist in question. Philip Guston (1913-1980) was a Canadian artist. His real surname was Goldstein and he was the youngest of a family of Ukrainian Jewish immigrants who fled their home country. When he was nine years old, they moved to Los Angeles. In the middle of tragedy and severe economic conditions, he began to draw to get away from life’s problems. In fact, his mother was a big support. Later on, he got into the Manual Arts High School. There, he met Jackson Pollock. Furthermore, both of them were expelled for their satirical cartoons, although Pollock got back in. Throughout his formative years, he came into contact with traditional European art, Mexican muralism, Surrealism and Cubism, and the Hindu philosopher Krishnamurti.

At first, art was a sort of escape for Guston. However, after learning about Mexican muralism’s social function, his vision shifted. He learned art could be used as a tool for social change. From then on, his art became increasingly political. Furthermore, it carried anti-fascist messages. Even more, he traveled to Mexico to work with muralists on some projects. Additionally, he created works about other countries, like Spain during the Civil War. Later on, he focused on easel paintings.

Also, he began teaching and participating in exhibitions. Throughout this period he maintained a figurative style. However, he started to move towards abstraction for some time. His involvement in the Abstract Expressionist movement brought him success too.

“A True Turning Over”

Eventually, he came back to figurative painting and social causes. In fact, the riots of 1968 in Chicago during the Democratic Convention pushed him in this direction. In his words,

When the 1960s came along I was feeling split, schizophrenic. The war, what was happening to America, the brutality of the world. What kind of man am I, sitting at home, reading magazines, going into frustrated fury about everything—and then going into my studio to adjust a red to a blue?

It is precisely in this period that his controversial paintings appeared. First, let us address the exhibition in general.

To commemorate the artist’s life and art, the National Gallery of Art in Washington DC, the Museum of Fine Arts in Boston, the Museum of Fine Arts in Houston, and the Tate Modern in London planned a retrospective exhibition. Philip Guston Now was meant to open in 2020. In it, they reunited dozens of paintings and drawings from both public and private collections. Many of them reflected on satirical messages, such as his series of caricatures illustrating President Richard Nixon. In fact, these works attracted much attention as they are not often on display. Such an effort took five years of organizing.

It was understandable that the exhibition moved due to the COVID-19 pandemic. However, the museums quickly decided on another postponement until 2024. This time, they were concerned about certain paintings containing KKK imagery. At the time, the United States was experiencing massive protests and criticism regarding George Floyd’s murder. Therefore, the organizers worried that it would send the wrong message to the audience. Moreover, they wanted to reflect on the current situation and “reframe [their] programming”.

Now, let us focus for a moment on the hooded figures or as Guston called them, “little bastards”. 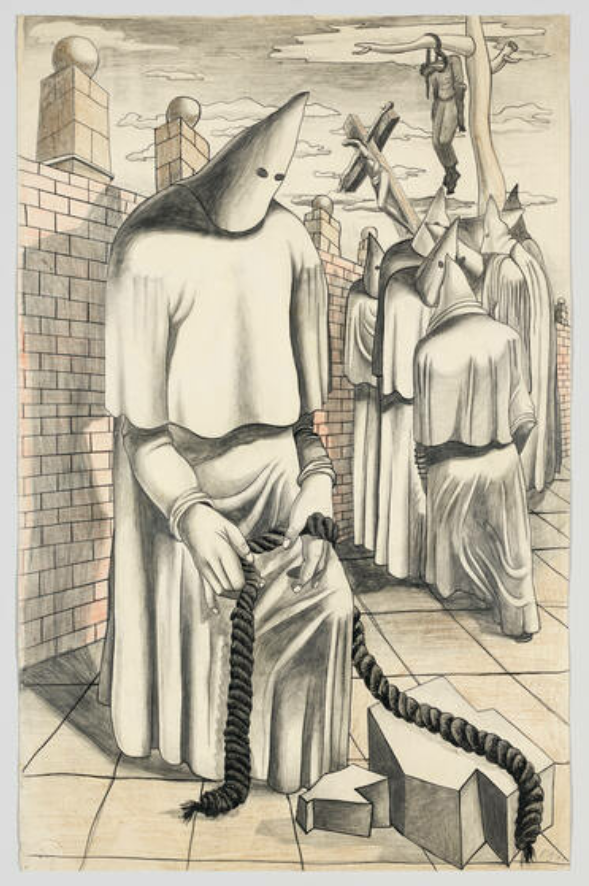 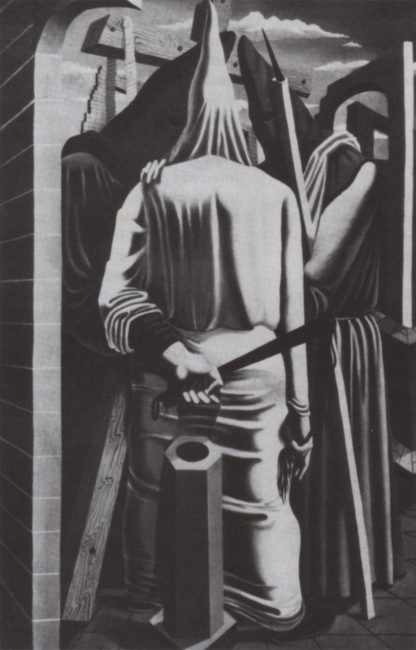 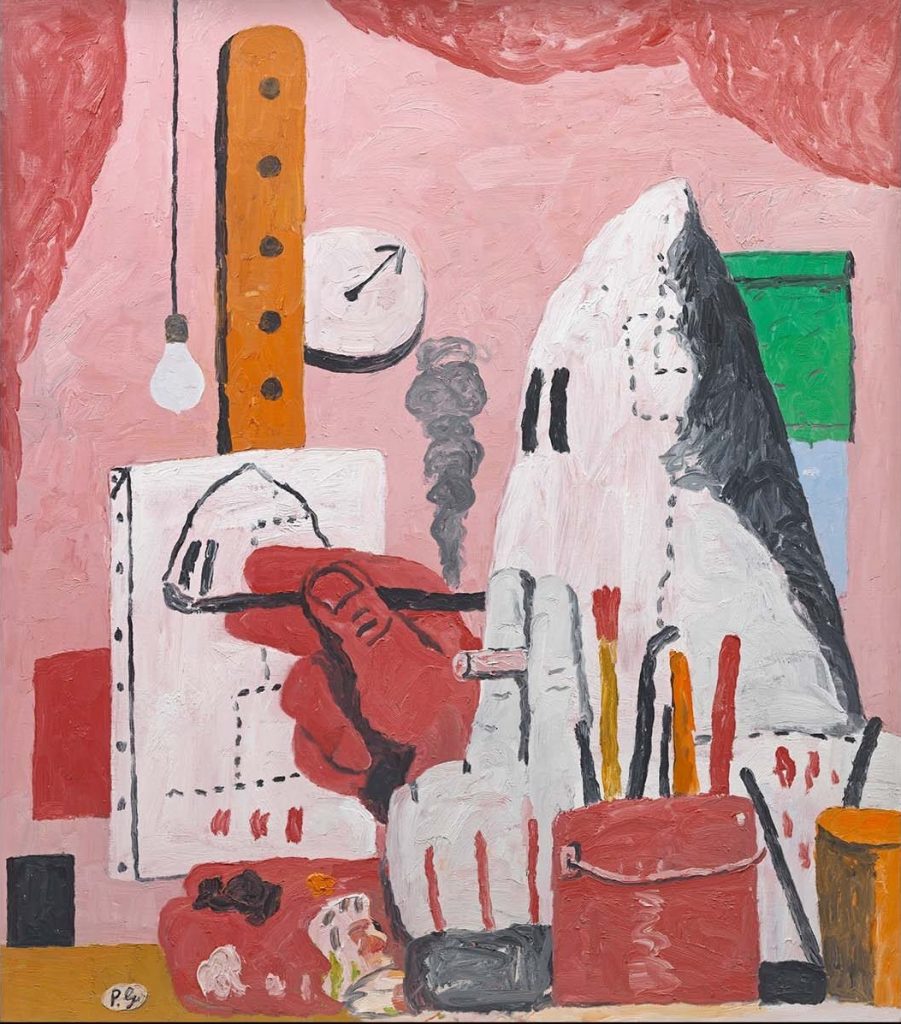 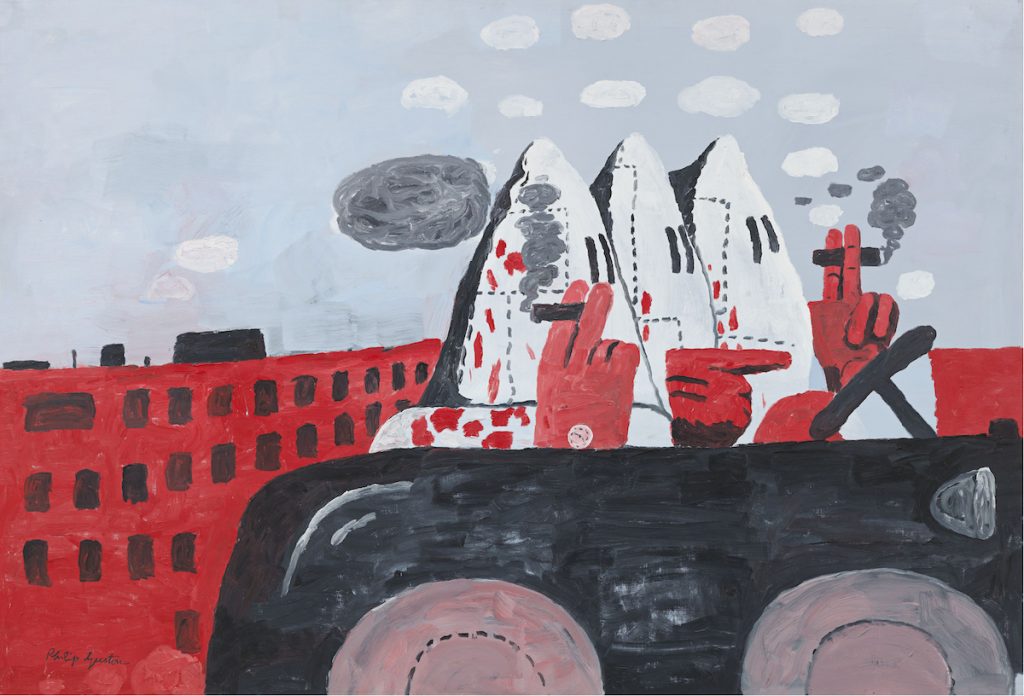 They first appeared in his imagery in 1930. In a drawing for his painting Conspirators, he depicted eight of the figures. The one in the foreground holds a rope. At the back, there are the others. Then, the eye moves past them to see a cross falling and a man with a dark skin tone hanging from the tree.

This is the actual painting he did two years later. Unfortunately it was destroyed by Klansmen.

The Return of the Hooded Figures

When Guston went back to political art, this imagery reappeared. Curiously, he declared them to be self-portraits. One of his reasonings was that those racist ideologies might be inside him too.

Truly, the issue with this hooded figures is that their meaning is not quite clear. Obviously it does not pretend to glorify them in any way. But what exactly is he saying? Perhaps it is about social injustice. Maybe it is about the casualness with which these people exist. Many have offered their own interpretations.

In response to the postponement, critic Barry Schwabsky drafted a letter and published it in The Brooklyn Rail. The text condemned the decision of the museums harshly.

These institutions thus publicly acknowledge their longstanding failure to have educated, integrated, and prepared themselves to meet the challenge of the renewed pressure for racial justice that has developed over the past five years.

Indeed, the statement from the Directors did not help them. On the contrary, it exposed them. Sure, the exhibition began its planning five years prior to its opening. However, it is not as if the organizing team lived in a bubble. Yet, that’s exactly what they are reflecting. Furthermore, racial injustice relating to the police did not start with George Floyd’s case. Therefore, it seems like a poor excuse. Just before the museums started planning the show, at least eight African Americans were killed in 2014. Moreover, throughout those five years, other cases occurred such as Alton Sterling in Lousiana, and Stephon Clark in California. All of these killings sparked protests and reached the news.

The letter goes further to accuse the institutions of avoiding “troubling reflection and self-examination”. Moreover, it holds museums accountable as they are also part of the system of repression. Truly, the public cannot forget that museums are Western institutions that often contribute to racist and oppressive narratives. That is why the need to de-colonize them is so important nowadays. Part of it requires honest and difficult conversations, as well as changes on stage and behind the scenes. They have to open their doors not only to artists of different races, but to professionals working within the exhibitions. In the case of Philip Guston Now, the entire curatorial team was white.

Finally, the letter demanded the restoration of the exhibition’s schedule. So far, 3004 people from the art world have signed it. Some of them left commentaries. Here are some examples:

Let’s discuss this work now, when people are thinking about injustice.

Anyone who has visited an art exhibition knows there are several resources to guide the audience. For instance, they can make use of layers and panels to explain Guston’s purpose and background, as well as digital content. Actually, they already had essays from African American authors Glenn Ligon and Trenton Doyle Hancock.

At Last, Philip Guston Is Here

Finally, it was decided that the Philip Guston Now exhibition would take place in 2022-2023. Currently, the exhibition is at the Museum of Fine Arts in Boston. It opened on May 1, 2022, and will end on September 11, 2022. Later, it will travel to the other three museums:

Philip Guston Now is one case of the necessity of museums to address more than just aesthetics. Art is not exempt from social and political events. In truth, ignoring these issues does no favor to the works and artists who made them. A change in mindset to bring museums to our new realities is long overdue.