Petrus Christus, A Goldsmith in his Shop 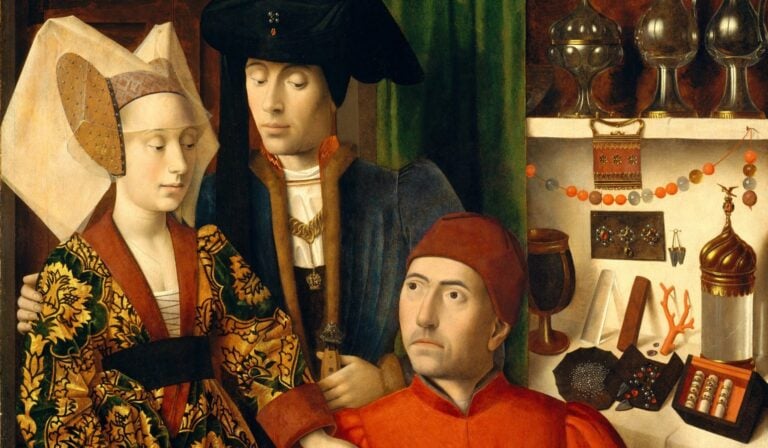 Petrus Christus (c. 1410/1420 – 1475/1476) was an Early Netherlandish painter active in Bruges from 1444, where, along with Hans Memling, he became the leading painter after the death of Jan van Eyck. He was influenced by van Eyck and Rogier van der Weyden and is noted for his innovations with linear perspective and a meticulous technique which seems derived from miniatures and manuscript illumination. Today, around 30 works are confidently attributed to him.

Christus was an anonymous figure for centuries, his importance not established until the work of modern art historians. Giorgio Vasari barely mentions him in his biographies of painters, written in the Renaissance, and near contemporary records merely list him amongst many others. Today we want to present one of his masterpieces, A Goldsmith in his Shop.

The panel attests to Netherlandish artists’ keen interest in pictorial illusionism and attention to detail, especially in the luminous jewellery, glass, and metallic objects, secular and ecclesiastic trade wares that are examples of the goldsmith’s virtuosity. The main figure in this enigmatic painting was long identified as Saint Eligius who is the patron saint of goldsmiths, due to the presence of a halo, which was recognized as a later addition and subsequently removed.

But the panel is likely a vocational painting, which portrays the profession of goldsmithing and perhaps a specific goldsmith—it may be a portrait. Some art historians suggested that he is Willem van Vleuten, a Bruges goldsmith who worked for Philip the Good, duke of Burgundy. In 1449, the date of this painting, the duke commissioned from van Vlueten a gift for Mary of Guelders on the occasion of her marriage to James II, King of Scots. That couple may well be depicted in this painting, portrayed buying a wedding ring that is being weighed on a scale. The girdle that extends over the ledge of the shop into the viewer’s space is a further allusion to matrimony. The convex mirror, which links the pictorial space to the street outside, reflects two young men with a falcon (a symbol of pride and greed) and establishes a moral comparison between the imperfect world of the viewer, and the world of virtue and balance depicted here.