Painting of the Week: Sir William Orchardson, The First Cloud 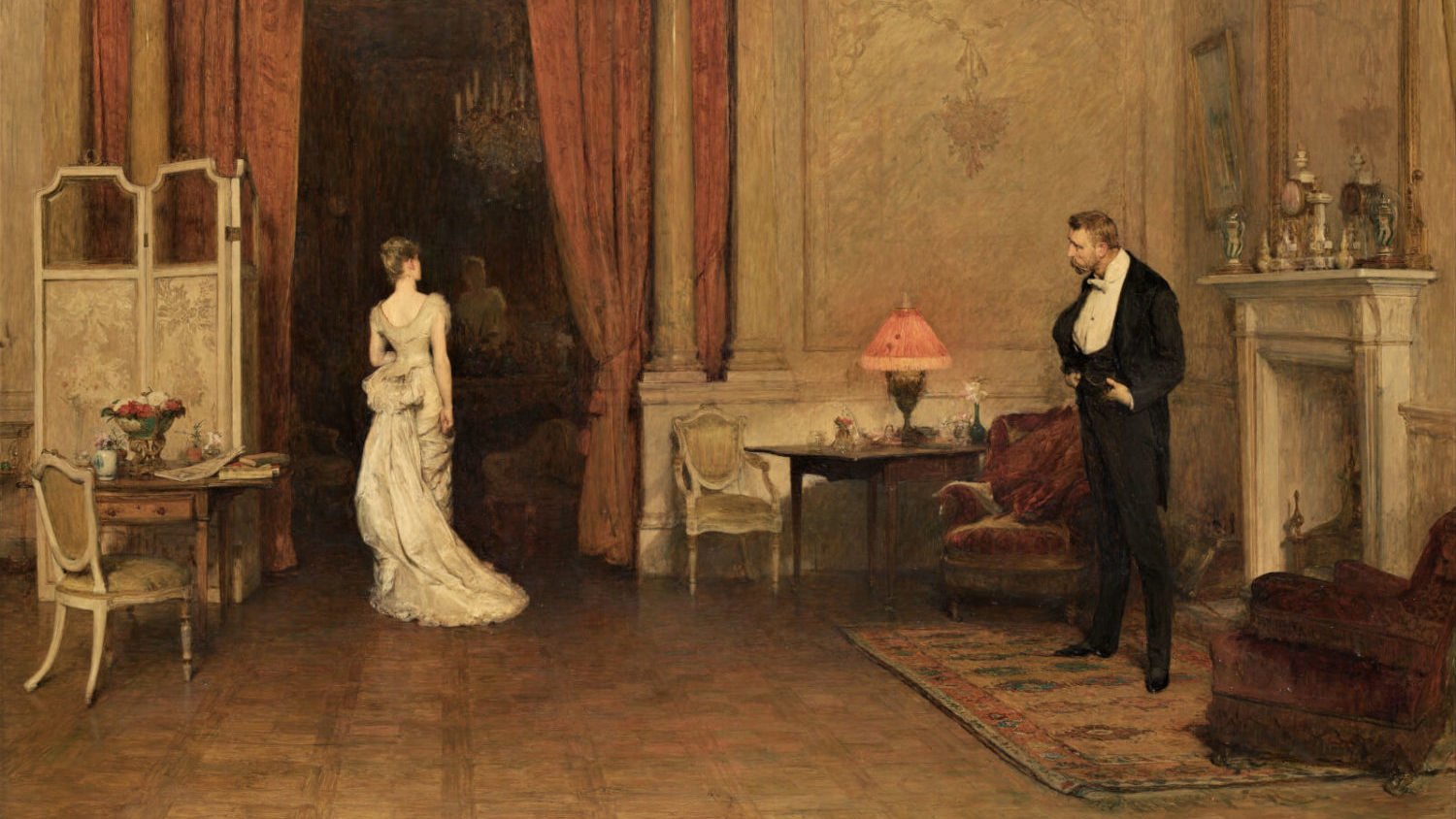 At first glance, Sir William Orchardson’s The First Cloud is a late Victorian domestic scene that appears to be tranquil, refined, and placid. However, at second view the luxurious elegance exposes the hypocrisy, double-standards, and bankrupted values of the privileged elite. The First Cloud showcases a crumbling marriage as boredom, indifference, and apathy begin to infect its foundations. The marriage is a house infested with termites. It appears whole and intact until its rotted and crumbling interior collapses under its own weight and avalanches into disaster and despair. Sir William Orchardson’s The First Cloud is a little-known work of biting commentary. Let us explore an Orchardson masterpiece. Let us explore a Victorian marriage.

Social commentary can be the basis of great theater, literature, and painting. It has a long tradition bolstered by great painters like Hieronymus Bosch, William Hogarth, and Pablo Picasso. Sir William Orchardson’s The First Cloud comments on English society of the 1880s, and how greed, vanity, and pride corrupts the basis of marriage and what it means to be married. Famous writers like Edith Wharton, Henry James, and Anthony Trollope explored these corrupting influences throughout their books, such as House of Mirth, The Portrait of a Lady, and The Way We Live Now. Like its literary contemporaries, The First Cloud also explores the follies of arranged marriages.

The 1880s was a time of dynastic marriages when fashionable people married for mutually advantageous benefits. It was common for one spouse to be well-connected, titled, but poor; and the other spouse to be young and wealthy. The most publicized arrangements were the impoverished English lords marrying rich American heiresses. These Dollar Princesses or Buccaneers were either lauded or lamented as the sign of the times. Marriage amongst the aristocracy was heavily influenced by the bride’s fortune and by the groom’s social pedigree. Marriage was not a love-struck match but a financial transaction. Youth and boundless cash were traded for titled rank and privilege. Each partner had to bring something of value to the marriage. Love had no financial value.

The First Cloud depicts an elegant couple of conspicuous wealth. The lady on the left is wearing a fashionable cream dress of late Victorian design. It has a bustle with gathered fabric, a long train, and a low-cut neckline. Famous fashion designers such as Charles Worth and Jacques Doucet produced such gorgeous gowns. The lady’s dress could easily be an example of their works with its flowing fabric and rustling silks. She is the epitome of dressing à la mode. She is a Dollar Princess.

The lady has her back to the viewer. She is quitting the room, and walking away from her older husband. Her head is slightly tilted and her outline is delicately reflected in the hallway mirror before her. She is walking to her right as implied by her turned head, swayed shoulders, and draped fabric. She is seconds away from exiting the illuminated salon and entering the shadowed hallway. Soon, only her husband will remain in view by the fireplace.

In contrast to the lady, the gentleman is wearing mostly solemn and somber colours. He is dressed in a stylish suit of black with a white shirt and bow tie. He inelegantly holds his hands inside his pockets crumpling his vest and coat lapels. His profile is spoiled by his stance, and he does not appear composed or collected. His left hand fidgets with the gold chain of his pocket watch. His eyebrows gather in a furrow marking his forehead with wrinkled lines. The gentleman is not calm and collected as his social position would require him. He appears drunk, jealous or irritated from the collective appearance of his wide stance, his drooped head, and slouching posture. No matter what his emotions may be, there is one thing that is for certain: his emotions are toward his wife. While she carelessly walks away from him, he is obsessing about her. The husband is not happy, and the wife is either indifferent or ignorant of the fact.

There is an emotional vacuum in the centre of The First Cloud. The two figures stand on opposite ends of the room like two actors on a wide stage. The gentleman is surrounded by heavy furnishings such as a white marble fireplace, two red velvet armchairs, and a beige wool carpet. Does the heaviness of his surroundings reflect the heaviness of his emotions?

In contrast, the lady is surrounded by light furnishings such as a gilt wood chair, a rosy teak table, and a cream wood screen. The objects reflect their owners, and their owners’ separate spheres of existence. The objects are not intermingled as in other households. They are at separate ends of the room just like their owners.

James W. Singer is an art historian and fine art photographer based in Lakeland, Florida.  Inspired by his travels, Singer believes in challenging the mundane by highlighting the under-appreciated and often overlooked subjects of life. He achieves this through dramatic cropping and off-centre composition.

Singer earned a Bachelor of Arts in Art History from the University of Florida. He was drawn to art history believing that great images inspire feelings and emotions that no other medium can express. Through his fine art photography, Singer seeks to capture the stories all around us.

Singer previously worked at the Polk Museum of Art and has been a photographer for the last ten years. He has sold his works at Curated Interiors, a modern art gallery; and numerous art shows including Art Crawl and Dixieland Spring Arts Festival. He currently has two pieces displayed at the Lakeland Regional Hospital and many in private homes. Follow his adventures on Facebook.