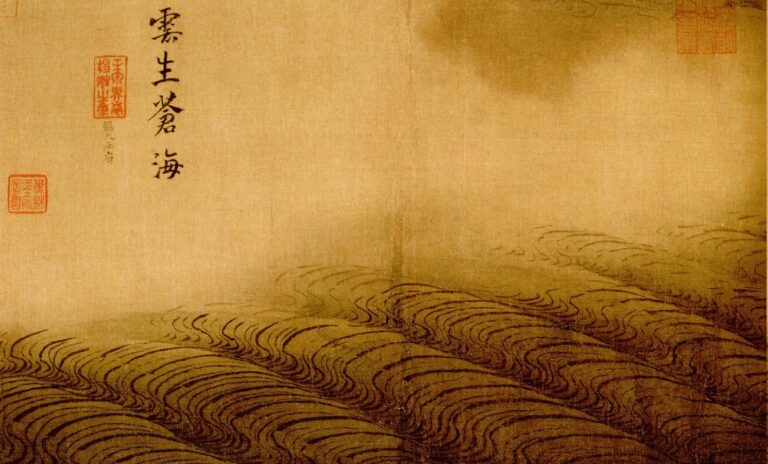 There’s more to the paintings of Ma Yuan than meets the eye.

Ma Yuan, (1160-1225) was a Southern Song Dynasty, Chinese painter from an illustrious family of academy artists. He lived during a cultural zenith when Chinese achievements in art and science were the most sophisticated and advanced in the world. Ma Yuan is one of the greatest painters of this age. His works, together with Xia Gui, formed the basis of the Ma-Xia school of painting and are among the finest from this period. His works have inspired Chinese artists of the Zhe School, as well as the great early Japanese painters Shūbun and Sesshu. [caption id="attachment_11439" align="aligncenter" width="1050"] 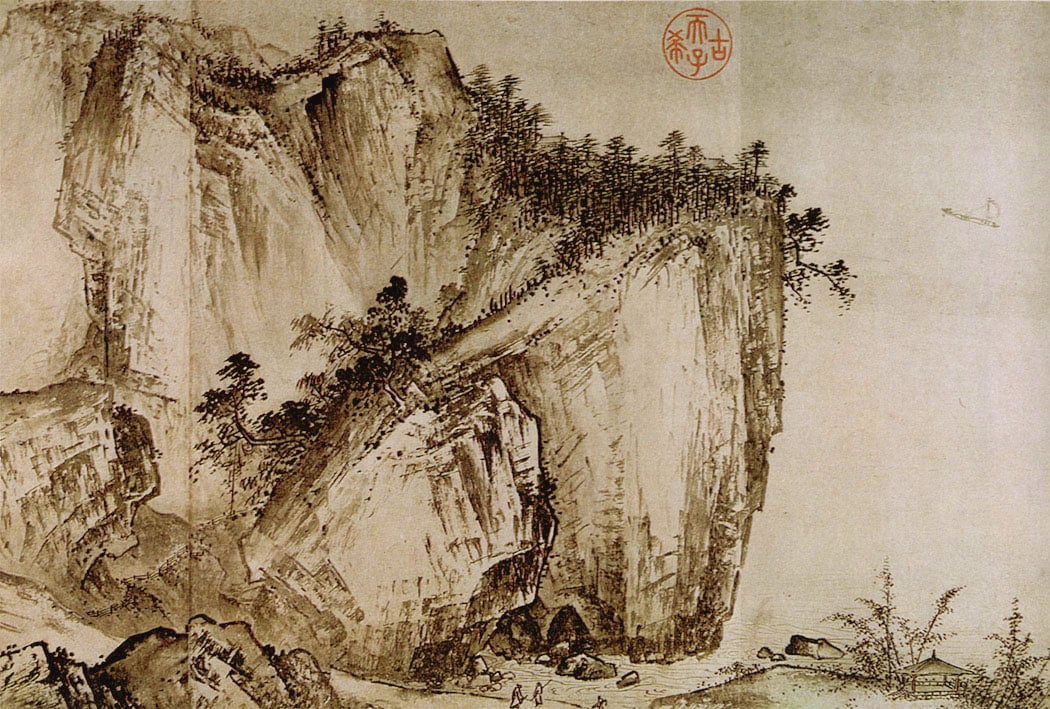 Xia Gui, Streams and Mountains with a Clear Distant View. 1195-1224, detail. Ink on paper. National Palace Museum, Taipei, public domain[/caption] His instantly recognizable style developed its sense of beauty from Southern Song society characterized by the pursuit of a highly aestheticized way of life, and the paintings often focus on evanescent pleasures and transience of beauty. His images evoke poetic ideas that appeal to the senses or capture fleeting qualities of a moment in time. One particularly important source of inspiration for Ma Yuan was the natural beauty of Hangzhou and its environs, especially West Lake, a famed scenic spot ringed with lush mountains and dotted with palaces, private gardens and Buddhist temples. [caption id="attachment_11460" align="alignnone" width="1359"] 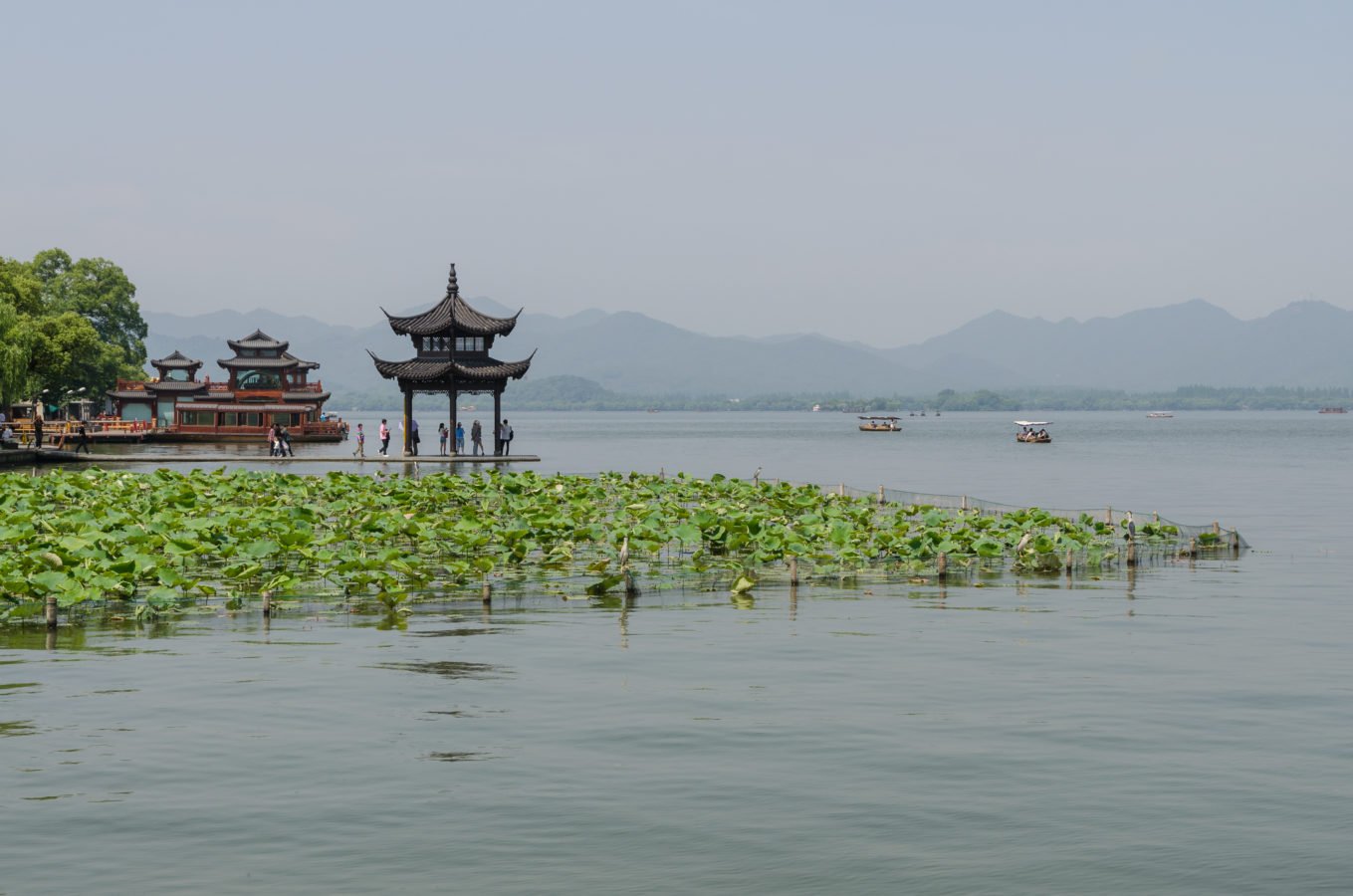 West Lake Pavilion and Water Lilies, Hangzhou, source: Wikimedia Commons[/caption] Southern Song culture tended toward refinement and elegance. Court painters like Ma Yuan excelled at rendering the palace banquets, activities of the seasons, and ceremonial celebrations in and around the capital of Hangzhou.  Whether they are records of real events or flights of the imagination, they all reflect the prosperous and sumptuous spirit of actual life among the upper classes and the Imperial Family. The elegance of scholar life, private gardens of recluses, viewing of paintings and chanting of poems, tasting of tea and unrolling scrolls, and the appreciation of curios are all found in the works of Ma Yuan. [caption id="attachment_11465" align="alignnone" width="1600"]

Part 3, Composing Poetry on a Spring Outing by Ma Yuan. Ink and color on silk. Atkins Museum of Art, Kansas City. See the whole image here.[/caption] A fine painting attributed to Ma Yuan, Composing Poetry on a Spring Outing, indicates he’s a master of this academic genre dedicated to leisurely activities enjoyed by a sophisticated family and friends. Here we see a group of idealised people around a picnic table. A beautiful, relaxed, well-dressed woman is writing poetry. The others are looking on. They’re very relaxed and comfortable, smiling gently and talking politely. It’s a perfect gathering exchanging poetic ideas to think and write about. [caption id="attachment_11459" align="alignnone" width="828"]

Composing Poetry on a Spring Outing by Ma Yuan, detail, Ink and color on silk. Atkins Museum of Art, Kansas City.[/caption] The Imperial Painting Academy continued the stylistic direction established by Emperor Huizong in the early twelfth century. Often executed in the intimate oval fan or album-leaf format, academic paintings - and the imperially inscribed poems that sometimes accompany them -  reveal an increasingly narrow, concentration of an object. Together with Xia Gui, Ma Yuan is often mentioned in Chinese criticism as epitomizing the highest level of painting at the Southern Song (1127-1279) Academy centered in Lin’an (within the area of modern Hangzhou). There’s no clear account of his life. He appears to have served as a painter in attendance under three emperors. He was a mature and celebrated painter by 1200. We know this because in that year Emperor Ning-zong’s favorite concubine and later empress, Yang Mei-tzu, often added inscriptions and seals to Ma Yuan’s paintings. [caption id="attachment_11441" align="alignright" width="221"] 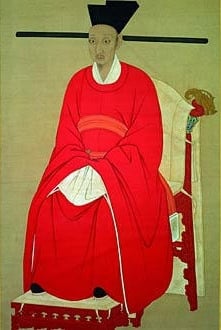 Ning-Zong, the 13th Emperor of the Song Dynasty. Author and Location Unknown.[/caption] Ma Yuan’s concept of beauty is still being understood in the West. Several American preeminent Chinese art scholars have published new information on this great artist’s life and works. After reading them I feel there’s something missing and wonder if there’s more to understand given China’s still at best a half-known place and people. This is what James Cahill, Professor Emeritus, said in his book, Lyrical Journey:

What the Southern Song academy painters and their followers do for their audiences, from emperors to cultivated townsmen … is to recall, re-create, and reimagine a lost poetic world. The paintings evoke in the viewer a set of idealized, familiar, timeless myths. They include the myths of eremitism (cultivation of hermits, escaping from the city to live as a hermit); of moving through the natural world and enjoying extended sensory participation in it; of untroubled and uncontaminated human relationships. The Southern Song paintings were never to be equalled in their poetic depths and nuances, their endless capacity to reimagine familiar themes, their power to engage the viewer in implied, undisclosed, and unconsummated narratives.

All this is true, there are poetics that imply sophisticated emotional associations enjoyed so much by the Imperial Family and Court. Ma Yuan did have indirect poetic images embedded in his painting. They are present, and they are metaphors pointing to less tangible meaning. This is true, but he also gathered into himself links to the Buddhist and Taoist beliefs he used in a great number of his paintings. [caption id="attachment_11432" align="aligncenter" width="1200"] 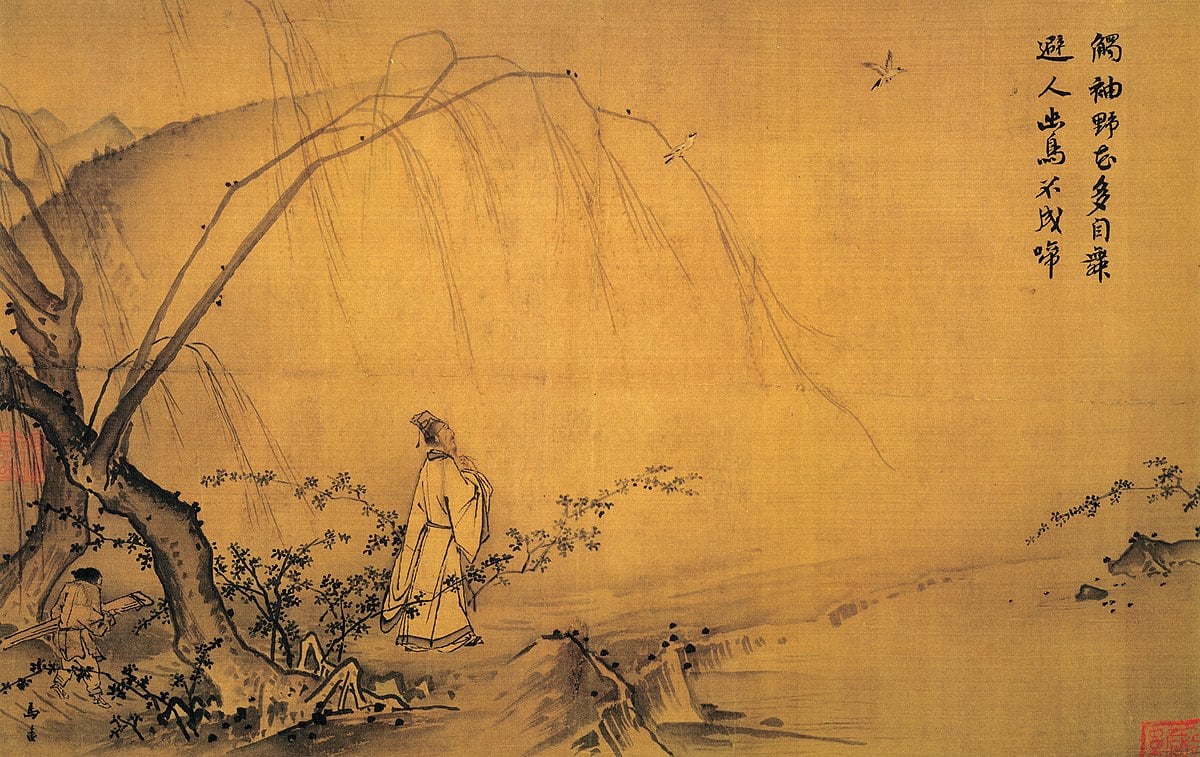 Ma Yuan, Walking on a Mountain Path in Spring. Ink on Silk. National Palace Museum, Taipei.[/caption] A painting that clearly has its spiritual roots in the Taoist tradition is called, Walking on a Mountain Path in Spring together with Emperor Ning-Tsung's couplet that reads: ‘Brushed by his sleeves, wildflowers dance in the wind; / Fleeing from the man, the hidden birds cut short their songs’; it’s a painting where a scholar communes with his natural surroundings. Here the poetic significance is caught in a brief moment while the scholar enjoys his encounter with nature and it suggests more than is seen. In the Song Dynasty, landscapes of more subtle expression appeared; emphasis was placed on the spiritual qualities and on the ability of the artist to reveal the inner harmony of man and nature, as perceived according to Taoist and Buddhist concepts. The Taoist and Buddhist influences on Ma Yuan’s paintings is possibly the most interesting underlying focus he uses for many of his works. [caption id="attachment_11468" align="aligncenter" width="583"] 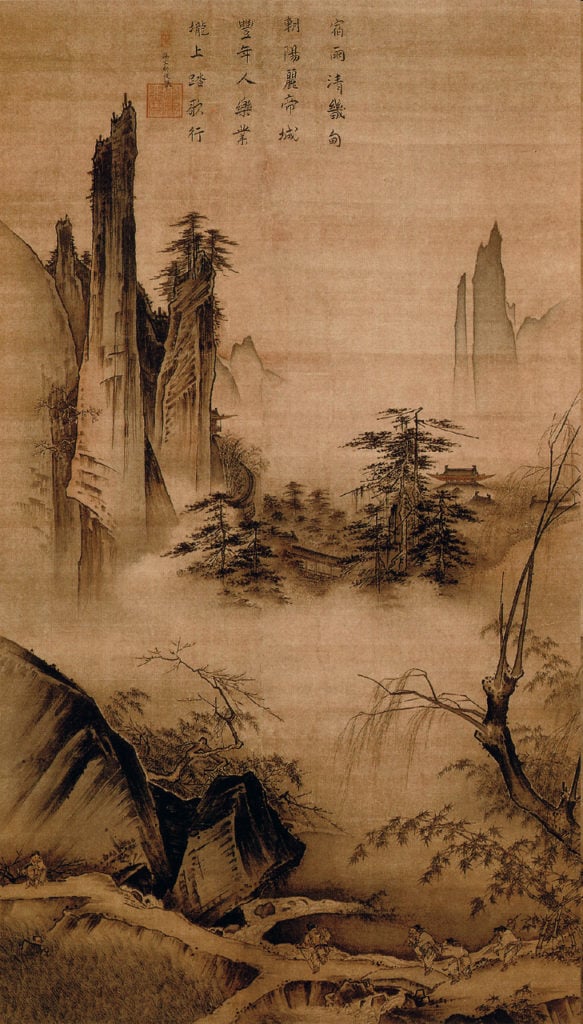 Ma Yuan, Dancing and Singing Peasants Returning from Work, 1660-1225. Ink on Silk, Beijing Palace Museum[/caption] This idea of Taoist/Buddhist consciousness directing the real purpose and meaning behind Chinese landscape painting is well explained in an article written by Miranda Shaw in the Journal of the History of Ideas, 1988. Her brilliant synthesis and insights into this subject should be understood by anyone interested in Chinese landscape art and painters. Many of Ma Yuan’s paintings have this intentional association with Taoism and Buddhism. Viewers love how he brings these images into their hearts in the simplest way possible, spontaneously, never against their will. [caption id="attachment_11469" align="aligncenter" width="633"] 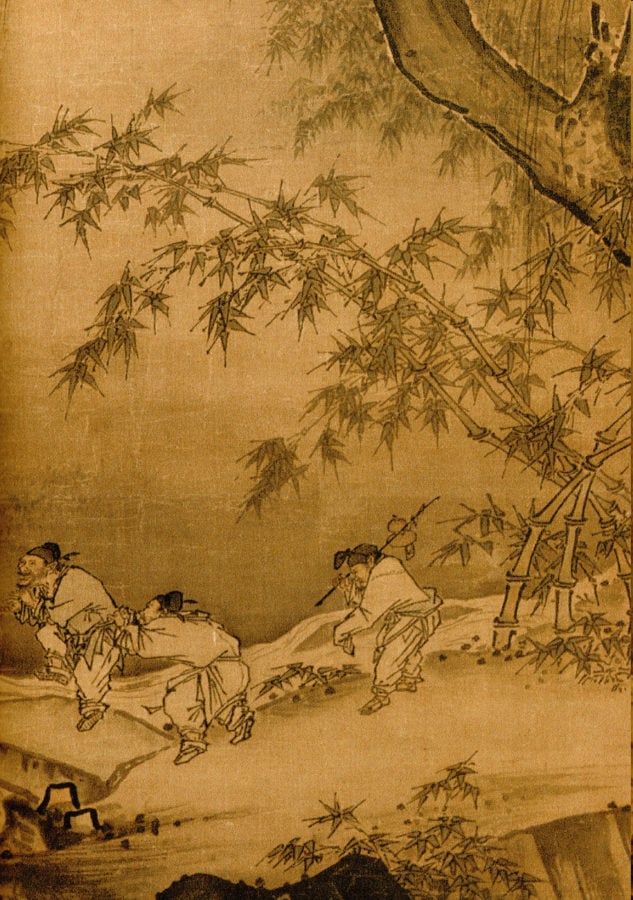 Ma Yuan, Dancing and Singing Peasants Returning from Work, 1660-1225. Detail, Ink on Silk. Beijing Palace Museum.[/caption] In a painting called, Landscape with Dancing Peasants, the happy men are crossing a bridge over a mountain stream suggesting they’re leaving one kind of world or reality and entering another. The high pointed mountains in the background shelters some houses across an expanse of white clouds where the rustics are headed. The Taoist suggestion is that these simple peasants enjoy their excursion so much they feel a drunken-like ecstasy as they follow the narrow path further into the remoteness of the mountains. Although it was a period in which Buddhism was past its zenith the Song dynasty represented a high point for art influenced by the Chan school which believed that Buddha-nature was present in every aspect of the universe, from the smallest plant to the greatest tree, from the lowliest worm to humankind. [caption id="attachment_11445" align="aligncenter" width="272"]

The Priest Dong shān Wading the Stream, by Ma Yuan, detail. Tokyo National Museum.[/caption] Ma Yuan’s scroll paintings, The Priest Qingliang and The Priest Yunmen, can be seen as uniting the concepts of ‘court painting’ and ‘Chan Buddhist painting’. Both scrolls have inscriptions by Empress Yang. It’s considered a masterpiece and connects Ma Yuan’s works to early Japanese Zen painters. One of his paintings, Apricot Blossoms, (calligraphy by Yang Mei-tzu), Nat’l Palace Museum, Taipei, immediately finds a special place in one’s feelings, the tender pink blossoms sending to our hearts a powerful message of rebirth and new life. The couplet reads, ‘Meeting the wind, they offer their artful charm;/ Wet by the dew, they boast their pink beauty.’ [caption id="attachment_11446" align="aligncenter" width="633"] 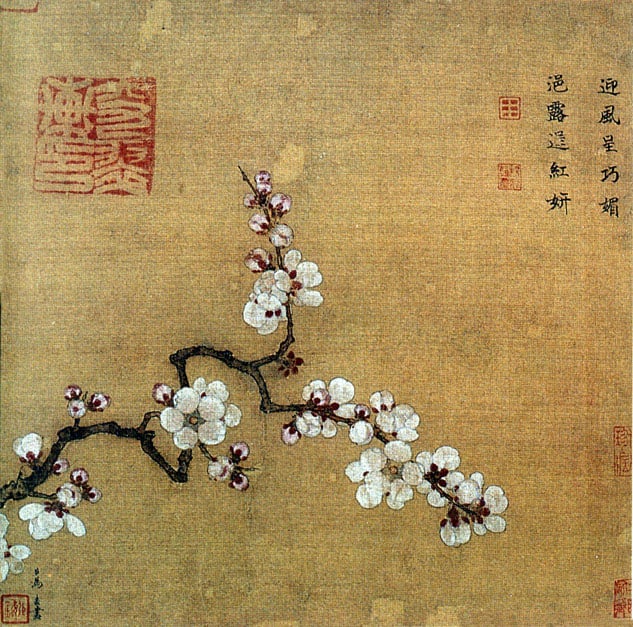 Apricot and Peach Blossoms by Ma Yuan. Southern Song Dynasty 1127-1279 ink and color on silk album leaf. National Palace Museum Taipei.[/caption] Ma Yan’s heart is filled with tender love for nature and his fellow man. He spiritualizes, in the most delicate way, every image whether a group of sophisticated people enjoying an outdoor poetry reading, or a group of rustics travelling on a mountain path, or a branch of peach blossoms, or a scroll painting of Buddhist priests; all these carefully selected subjects exhibit Ma Yuan’s rich sense of poetic reality filtered through the perceptions of a deeply religious man’s heart. James Cahill has a wonderful presentation on YouTube of Ma Yuan’s paintings called, A Pure and Remote View, Visualizing Early Chinese Landscape Painting. He explains that Song Dynasty landscape painting has been underappreciated but it’s getting more attention now. Looking closely at Ma Yuan’s paintings we get a glimpse of this other mysterious world within a world. Ma Yuan’s sense of beauty is attached to the mystery of the Taoist/Buddhist world. This is the aesthetic experience that motivated and thrilled Ma Yuan when he painted his pictures that were enjoyed so much in the Song Dynasty. After a very long time they’re beginning to enchant us in the West the same way now.

If you enjoyed reading this information, you may enjoy Barry Russell's article on Chinese Artist Kun Can, one of the Four Great Monk Painters. Bibliographical Citations: