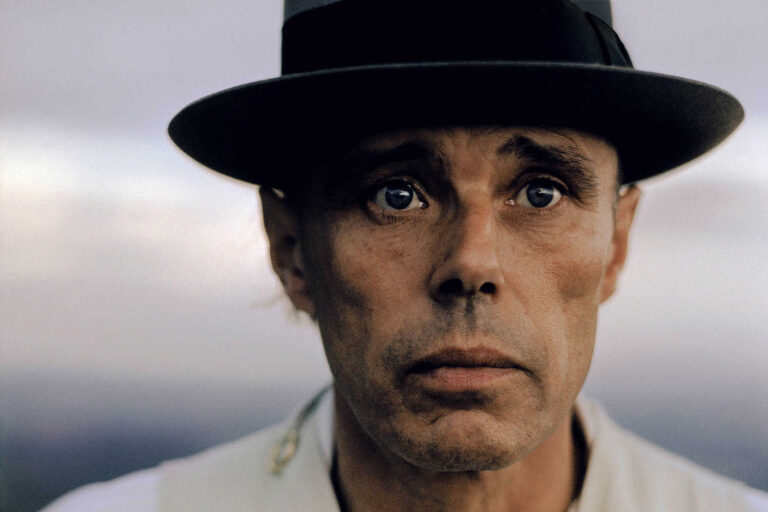 Today Joseph Beuys would turn 97. He was one of those mysterious artists whose biography can be considered a separate work of art, a legend. He's rightly regarded as one of the most influential artists of the second half of the 20th century, as he tackled in his art most pressing environmental, cultural, and political issues. To celebrate we will show a short survey of the most important works of Joseph Beuys. 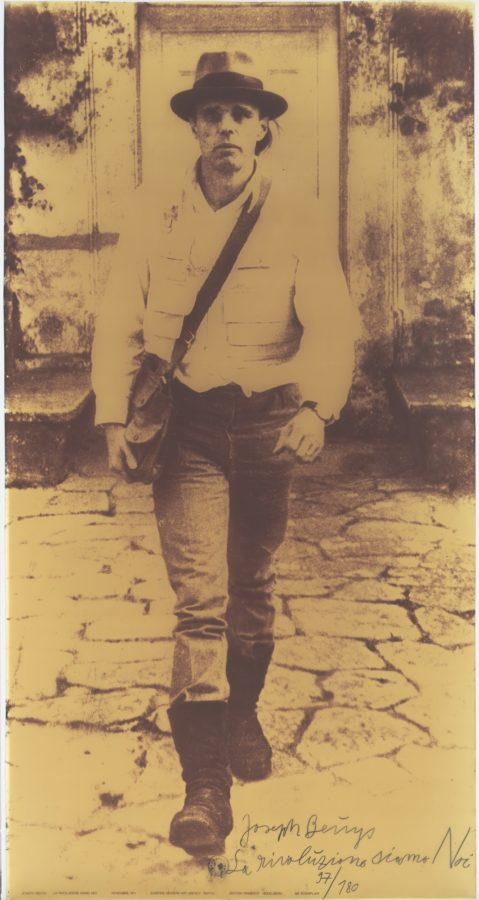 Joseph Beuys, La Rivoluzione Siamo Noi (We are the revolution), 1972, MoMA[/caption] Beuys had created an image for himself: he wore a fedora hat, heavy boots, and a fishing vest. He wanted to look like anybody else, but at the same time she stood out from the crowd. He believed that “Everybody is an artist” meaning that the human being is a creative being and that he can be productive in amany different ways.

To me, it’s irrelevant whether a product comes from a painter, from a sculptor or from a physicist. (Beuys in Schnellman and Klüsser 1980).

Beuys was born in 1921 to a bourgeois, strictly Catholic parents. When he was 12, the Nazis took power. He joined the Hitler Youth shortly before it became compulsory, but with time he realized it was evil and he committed small acts of resistance, such as rescuing a copy of Systema Naturae by Carl Linnaeus from a book-burning rally in the courtyard of his school. Since then, he was advocating activism and social change, as illustrated by this life-size photograph in which Beuys decisively walks towards the viewers demanding they join him and transform the society together. 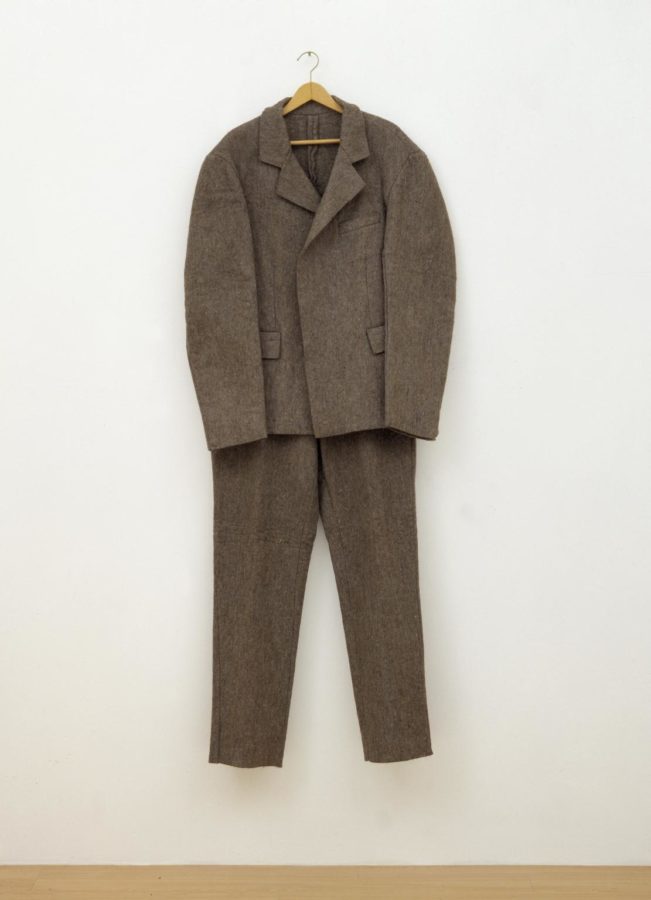 Joseph Beuys, Felt Suit, 1970, Tate[/caption] Interestingly, he created not only an image for himself but also made up bits of his biography, mixing fantasy and reality for the sake of a bombastic self-creation as a mythical figure of an artist. The most legendary scene from his biography-fantasy took place in 1944 when he was involved in a plane crash. Working for the Luftwaffe (he knew he would have been drafted so he volunteered to get a lighter job, first he worked as a radio operator and then as a rear gunner stationed in the Crimea), on 16 March his plane was shot down in the mountains. The event could have ended fatally had not for the Tartar tribesmen who found him and wrapped him in insulating layers of felt and fat to keep him from freezing to death. This piece of felt suit commemorates this event which by now has been disproved, although the plane crash did happen (killing the pilot and badly injuring Beuys), there were no Tartars, nor felt. In 1970 Beuys produced a hundred of such suits, stating that they could be displayed in any way. By displaying an everyday object Beuys challenged the traditional division between fine art and practical items hoping that viewers might realize that everyone is an artist, because, many people will ask themselves: “Why don’t I make something like that, something similar.” 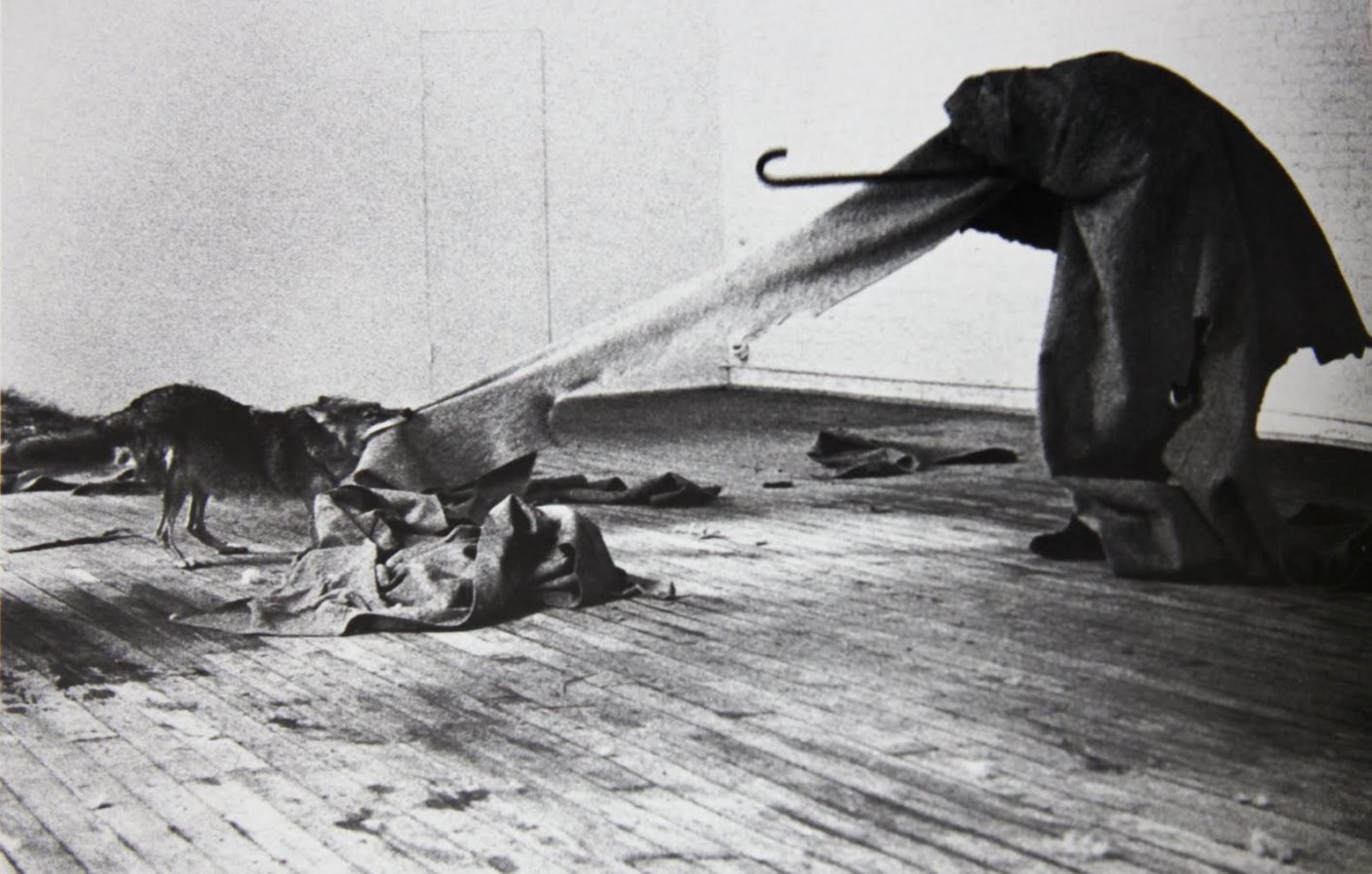 Joseph Beuys, I like America and America Likes Me, 1974, photo by Caroline Tisdall[/caption] Beuys was a member of Fluxus, an international art movement which united visual artists, composers, designers and poets. It was officially established in the United States by a Lithuanian artist George Maciunas in 1960. The word Fluxus comes from Latin, meaning 'flow' and Maciunas explained that the purpose of the movement was to ‘promote a revolutionary flood and tide in art, promote living art, anti-art’. One of Beuys's performances which could be counted as a revolutionary and highly conceptual work is I like America. In May 1974, for 3 days Beuys shared a solitary space of a room in West Broadway’s René Block Gallery with a coyote. Coyotes are often considered American national animals as they represent America’s untamed spirit. As you can imagine, the animal at first was extremely dangerous and behaved erratically (tore apart a blanket in the room), but ultimately it grew tolerant of Beuys. In this performance, Beuys wanted to prove his point about making a change in the society. He demonstrated that if one expresses a desire to get to know others and makes an effort to spend time with them, one can eradicate fear and stereotype. 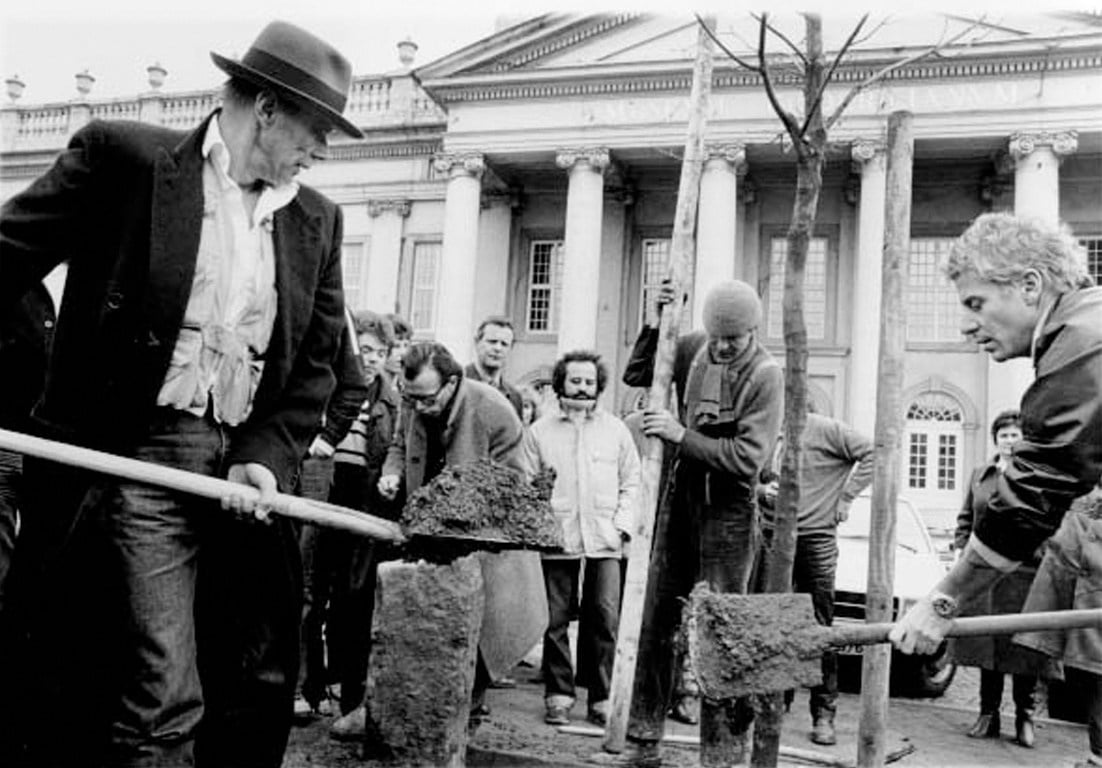 Joseph Beuys, 7000 Oaks, 1982, Kassel, Source: Pinterest[/caption] This is probably my most favorite work of Beuys. It is a process piece which required a lot of time and effort of numerous volunteers. It is a "social sculpture", as described by Beuys, which was intended to change the face of the city of Kassel, Germany. Beuys began the project in 1982 at Documenta 7, the international exhibition of modern and contemporary art that is organized at Kassel every five years (since 1955). Beuys first piled 7000 basalt stones in front of the Museum Fridericianum. Then, he planned to plant 7000 oak trees around town. The idea was that each time a tree was planted, a stone would be removed from the pile, changing the urban landscape of the city and improving the environment. Beuys wanted this way to alter the social spaces not only physically, but also spiritually and metaphorically.  7000 Oaks officially drew to a close five years later, at Documenta 8. Even Beuys's death didn't stop it from happening.