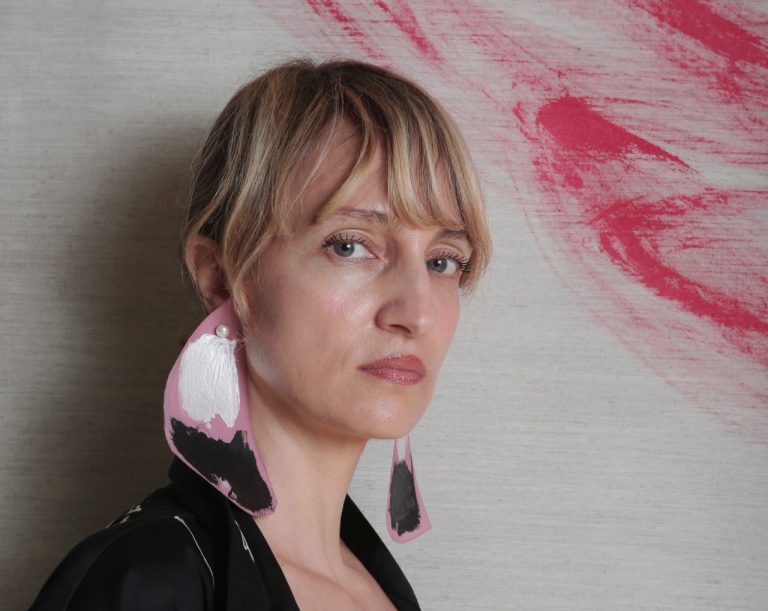 Milena ZeVu in her studio, June 2021. Courtesy of the artist. Detail.

The Artist and Her World: Marijana Stanić

Belgrade-born artist Milena ZeVu has long established an international career for herself. Marking her 20th anniversary in the art world, the artist decided to return to Belgrade this year to host a major retrospective featuring series developed throughout her career, from her early work to the most recent ones.

The exhibition, which was on show till June 19th, 2022, and curated by Nina Vagić, occupied the bottom part of 16 silos formerly part of Belgrade port. Chronologically arranged throughout the space, the works accompanied the viewers on a path of discovery. Not only a discovery of the artist’s work but of her entire universe.

Right at the entrance, the viewers were welcomed by ZeVu’s first major project, One, setting the tone for what they would encounter later. The project was developed as the artist’s response to the Balkan war of the late 1990s. It was first exhibited as a large-scale installation and performance at the Museum of Applied Arts of Budapest in 2004. About the work, curator Nina Vagić recalled:

On that occasion, ZeVu occupied the entire ground floor of the Museum, and the installation, on which the performance took place, came to the very street where the visitors entered and merged with it, becoming a part of it. Since then, performance has become one of the most important media in her artistic practice.

And it is exactly the mix of painting, performance, body art, and different techniques that informs and characterizes ZeVu’s work. From her early series, where she mixed acrylic paint, cement, and crystals, to her latest project, the ArtWalks NFTs, ZeVu has worked across various mediums and techniques. However, she remains true to her themes and committed to her message.

The exhibition managed to visually render how her career developed and was influenced by the people and places she encountered. Despite the peculiar and difficult space chosen for the exhibit, the artist and the curator succeeded in building a cohesive show that guided the visitors without rushing them. Going from one room to the other, we could experience not only different series of works but different stages in the artist’s life.

If her early work was centered on icons and figures of the past, the artist shifted towards a much more intimate work at a certain point in her career. In her ArtWalks series, originally started in 2015, she is both the center of the work and a secondary accessory. These works reflect on her femininity, the pressure experienced as a woman and mother, the importance of accepting ourselves, and ultimately our place in the world. Dealing with a vast range of themes, from personal to environmental, the various series of ArtWalks are cohesive yet varied.

The artist started carving out of the canvas a key-hole human figure, where the spectators can place themselves and feel part of the work, and ended up, in Angels, filling up that hole with golden mirrors, as if the cycle was now completed and the artist was ready to move on, finally knowing who she is and what her works have to say.

Talking with the artist, she mentioned how this exhibition was both an end and a starting point for her. Putting everything in one single show, and being able to see her entire career in one place, was a transformative experience that left her wondering what would come next.

Milena ZeVu graduated from the Academy of Applied Arts in Belgrade. She is a multimedia conceptual artist whose creative work includes painting, sculptures, installations, video, performance, NFT, and AR.

From 2001 to 2015, she created art collections on different themes of interest in a combined technique with acrylic, cement, and crystals.

In 2015 ZuVu started a new artistic direction, which she named ArtWalks. This art form is a fusion of painting, body art, performance, and lately, NFT.

Carlotta Mazzoli is an independent curator and art advisor, currently based in Europe. Over the past ten years, she has collaborated with private and public institutions and art galleries in Italy, London, New York, and Shanghai. She specializes in public art, environmental and social issues, and the importance of art as a relational medium. In her free time she likes to write about art and travels on Artsy Travels.